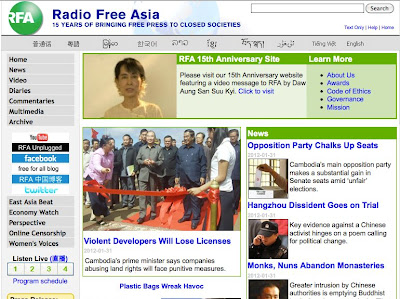 Though I have been closely following L'Affaire Ngabo from the time, Tsering Woeser mentioned it for the first time on her blog (in Chinese), I refrained to write about it.
A couple of weeks after Woeser's first posting, an English translation was available on the site High Peaks Pure Air.
Now that the issue has come up in the Indian media (see The Hindu's article below), I feel that I should pen (on the keyboard) some of my thoughts.
Several commentators/actors have already aired the views, this includes an arrogant US Congressman Dana Rohrabacher, clarifications from the Tibetan Prime Minister Lobsang Sangay and a Statement from the Tibetan Parliament.
Intellectual Jamyang Norbu has also given his opinion on the Affaire.
What surprises me most in the entire saga is that the victim (Jigme Ngabo) has not spoken, or a least not officially (though 41 Tibetans from the RFA Staff wrote a letter defending him).
Why defend someone who has not even complained?
Or has he only complained in China, to people like Tsering Woeser?
My question is therefore why taking a side on Ngabo's dismissal when Ngabo remains silent.
Ms. Libby Liu has also kept strangely quiet. As the boss of Radio Free Asia, it was her duty to show some transparency and explains the conditions under which the contract of Jigme Ngabo were terminated.
To remain silent opens the 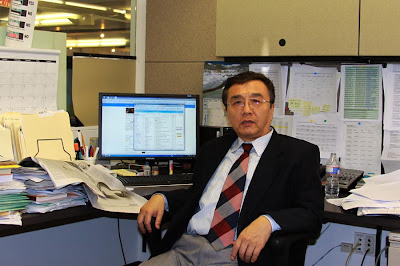 door to all speculations.
Ms Liu should be true to Radio FREE Asia, otherwise as Tsering Woeser pointed out, what is the difference between a so-called FREE world and the regime in Beijing.
If she is not allowed to speak, she should consider resigning from her job.

It is also rarely mentioned, but Jigme Ngabo is the son of Ngawang Jigme Ngabo, who worked closely with the Chinese since the beginning of the 'liberation' (invasion) of Tibet.
I have often written on Ngabo Sr. on this blog.
It should also not be forgotten that Jigme Ngabo had extensive contacts in China and particularly in the Party. It could have perhaps been useful if the negotiations were to start again.
Or while in RFA's, has Ngabo walked on someone's foot in the Tibetan Establishment? It is possible, but one can only speculate in the current opaque atmosphere.
First and foremost nobody asked: who is benefiting the 'crime'?
Undoubtedly it is the Communist leadership in Beijing who, without doing anything, has shown the world the deep division in the Tibetan society.
It has been demonstrated that Dharamsala's political stand is not accepted by all Tibetans in the Diaspora (and in Tibet, where nobody immolate itself for the Middle Path).
Radio Free Asia would do a great service to the Tibetan cause by being more transparent and if he has really been victimized, Jigme Ngabo should speak openly and not through proxies.

U.S. lawmaker accuses Tibet’s government-in-exile of silencing dissidents
The Hindu
November 30, 2012
Chander Suta Dogra
A row has broken out between the Dharamsala-based Tibetan government-in-exile (TGIE) and Congressman Dana Rohrabacher over the removal of Jigme Ngabo, the head of the Tibetan language service of Radio Free Asia (RFA), earlier this month.
Mr. Rohrabacher has alleged that the government-in-exile was manipulating news coverage of itself and had engineered the dismissal of Mr. Ngabo, who was reportedly not toeing its line on the resolution of the Tibetan issue.
The U.S. lawmaker, whose allegations have been supported by some prominent Tibetan intellectuals, has also suggested that U.S. aid given to the government-in-exile for the welfare of Tibetan refugees might have been misused.
After Mr. Ngabo, a long-time employee of the RFA was fired, Mr. Rohrabacher and some dissident Tibetans critical of the Dalai Lama’s middle-way approach to resolving the Tibetan issue accused the government-in-exile of stifling free speech within the Tibetan community. Demanding an investigation into claims of censorship within the RFA, Mr. Rohrabacher has said, “Jigme Ngabo’s services were terminated for political reasons. RFA needs to continue to be the source for accurate information.”
Mr. Rohrabacher, one of the leading supporters of the Tibetan cause, who had in 2007 called for a boycott of the Beijing Olympics over China’s treatment of ethnic Tibetans, in a letter to the elected Prime Minister of the government-in-exile, Lobsang Sangay, wrote: “Actions taken by you and other Tibetan leaders are eroding the support within the U.S. Congress for the Tibetan cause. I will not tolerate machinations by you or your associates to deprive the Tibetans of the joys of open debate and free exchange of information that RFA has provided.”
He went on to say: “I am also aware of serious accusations that the U.S. funding meant for Tibetans may have been misspent, and perhaps goes into the pockets of Chinese and Tibetan power brokers.” In 2012, the U.S. government gave $7.5 million to the exiled government. .
The Tibetan Parliament-in-exile has responded to these accusations saying: “Keeping in view the objective of the radio service, we have expressed our opinion and concerns in and outside the Tibetan Parliament-in-exile regarding contents of some programs of Radio Free Asia in the past and we shall do so in future as well, which we consider is well within our democratic rights. We have neither in the past nor will we ever in future interfere in its functioning.”
Parliament’s Speaker Penpa Tsering, in a letter to Mr. Rohrabacher made public on Wednesday, welcomed scrutiny by a U.S. agency over the utilisation of funds. “We wish to state in unequivocal terms that any assistance by U.S. received through the Central Tibetan Administration are accounted and audited through proper democratic mechanisms with full transparency and accountability.”
The crux of the dispute lies in the increasing discomfort within the government-in-exile over the self-immolations by Tibetans inside Tibet (almost 80 till the beginning of this week) that has triggered a debate in the exile community about the usefulness of continuing with the Dalai Lama’s middle way approach. Most of those who immolated themselves had been demanding complete independence and the Dalai Lama’s return to Tibet. Those opposed to the Dalai Lama’s policy said Mr. Ngabo irked the government-in-exile by encouraging open discussions on various options for Tibet’s future, including outright independence.
His removal was preceded by several interactions between government-in-exile officials and RFA head Libby Liu.
Jamyang Norbu, a prominent Tibetan intellectual whose contract with the RFA was also cancelled, wrote in his blog this week: “It is an article of faith in the Central Tibetan Administration that if somehow all independence activism and discussion were halted or contained, then Beijing would agree to the “genuine autonomy” solution proposed in the Dalai Lama’s Middle Way policy; or would, at least, resume the negotiations it terminated two year ago.” He went on to say that given the extremely sensitive situation prevailing in Tibet as a result of the immolations “it would not be unreasonable to assume that Beijing wants Dharamsala to stop the “splittist” messaging from exile, particularly from RFA broadcasts, which it firmly believes is fuelling the immolations and protests within Tibet. Dharamsala in turn probably shares Beijing’s concerns as the self-immolation crisis in Tibet and the resignations of the Tibetan envoys have placed extreme pressure on the TGIE leadership’s signature Middle Way policy.”
The government-in-exile’s position, however, is that the steps taken by it in resolving the Tibetan issue are unanimously approved by the Tibetan Parliament-in-exile and the “U.S. government has stood firmly behind us.”
The RFA was created in 1996 as a private, not-for-profit corporation funded by the U.S. government to “provide information to people living under repressive regimes in Asia.”
Posted by Claude Arpi at 7:31 AM