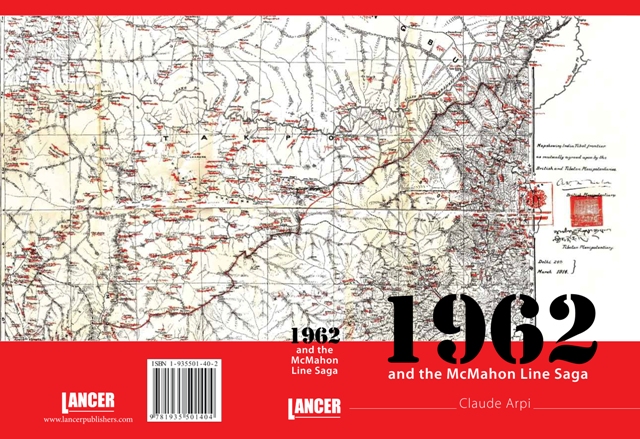 Excerpts of my book, 1962: the McMahon Line Saga  are published in the Sunday Magazine of The Pioneer.

Details of the Sino-Indian war, closely examined in the 1963 Henderson-Brooks Report, remain obsessively guarded by the Government of India. Claude Arpi’s latest book tells us why. Excerpts:

Fifty years have passed since China entered NEFA and Ladakh. This event has so deeply traumatised India that the Sino-Indian conflict has remained a scar in the nation’s psyche, partly because we do not know what exactly happened.
While it is today possible to get some hints of what took place from Indian official sources (the Official History of the 1962 War prepared by the Ministry of Defence and a number of White Papers published by the Ministry of External Affairs), but also from memoirs written by the main actors like Brig John Dalvi, Maj Gen Niranjan Prasad, Maj Gen DK Palit or Lt Gen BM Kaul as well as CIA, Russian and Chinese sources, but the main Indian report prepared by Lt Gen Henderson-Brooks and Brig Prem Bhagat is unfortunately still the most secret document of the Indian Republic.
Having lost hope that the famous document will one day be declassified, I have tried to guess: “What on earth has stopped the Government to declassify the report?”
Though portions of it were read out in Parliament by then Defence Minister YB Chavan in 1963, the gist seems to be missing.
A book helps us to understand the background of the Henderson-Brooks Report. Between 1962 and 1965, RD Pradhan was the Private Secretary of YB Chavan, who took over as Defence Minister from the disgraced VK Krishna Menon after the debacle of October 1962. Pradhan’s memoirs give great insights on the reasoning of the then Defence Minister who ordered the report: “For Chavan the main challenge in the first years was to establish relationship of trust between himself and the Prime Minister. He succeeded in doing so by his deft-handling of the Henderson-Brooks Report of Inquiry into the NEFA reverses.”
The Private Secretary elaborated on the Defence Minister’s sentiments during the following months: “During the conduct of the enquiry, Chavan was apprehensive that the committee may cast aspersions on the role of the Prime Minister or the Defence Minister.” Pradhan adds: “His (Chavan’s) main worry was to find ways to defend the Government and at the same time to ensure that the morale of the armed forces was not further adversely affected. For that he repeatedly emphasised in Parliament that the enquiry was a fact-finding one and to ‘learn lessons’ for the future and it was not a ‘witch-hunt’ to identify and to punish the officers responsible for the debacle.”
It is clear that the main objective of Chavan was to defend the Government, in other words, ‘defend Nehru’ and the political coterie around him who were responsible for the death of nearly 2,000 Indian officers and jawans.
Chavan’s Secretary concludes: “It was a tribute to his sagacity and political maturity that he performed his role to the full satisfaction of Parliament and also earned the gratitude of the Prime Minister.” He obviously earned Nehru’s gratitude because he managed to absolve him of any wrong even though the Prime Minister was the main culprit.
In 2008, answering a question on the report, Defence Minister AK Antony told Parliament that the Henderson-Brooks Report could not be made public because an internal study by the Indian Army had established that its contents “are not only extremely sensitive but also of current operational value”.
At first sight it seems strange that this 49-year-old report is still of ‘operational value’. Does the Minister mean reverse operational value? It is probably a manual of what should not be done in case of a conflict with China or any other country. All the more reason to study it!
Were the officials who drafted the Minister’s reply aware of another report, Official History of the Conflict with China (1962), prepared by the same Defence Ministry, detailing the famous ‘operations’ in 474 foolscap pages?