The Special Frontier Forces, the Tibetan Army (also known as the 22s) is today celebrating the 50th anniversary of its formation.
Why to have fixed the formation of the Tibetan Army on October 14?
Probably B.N. Mullik, the then Director of the Intelligence Bureau wanted to please Nehru on his birthday by telling him that he 'had found a solution' to China's military superiority.
I quote here some excerpts from The CIA's Secret War in Tibet by Kenneth Conboy and James Morrison


On 14 November, an Indian counterattack in NEFA was soundly routed. Three days later, the entire NEFA line collapsed, giving China virtual control over 64,000 square kilometers of territory.
By 19 November, leaders in New Delhi genuinely feared an attack on Calcutta, prompting Nehru to take the extraordinary step of sending two secret back-channel messages to Kennedy pleading for a pair of bomber squadrons flown by U.S. pilots.
India's infantrymen and Nehru's pride were not the only casualties of the conflict. Back on 28 October, America's bete noire, the discredited Krishna Menon, had tendered his resignation. With him out of the way and the situation on the frontier critical, Kennedy gathered some of his best and brightest on 19 November to discuss the war in the Himalayas. Among those present were secretary of Defense McNamara, Secretary of State Dean Rusk, and Assistant Secretary of State for Far Eastern Affairs Averell Harriman. At seventy-two, Harriman was one of America's most respected diplomats and politicians. The former governor had worked closely with the Indians in the past, having appealed to Nehru the previous year to assist in formulating a negotiated end to the looming superpower rivalry in Laos. Significantly, too, throughout the summer of 1962, Harriman had been a lone senior voice in the State Department supporting the CIA's argument for ongoing paramilitary operations out of Mustang.

Discussed at the 19 November meeting was increased U.S. military assistance to India and options for a show of force in the region. Also mentioned was the possibility of using the CIA's Tibetan guerrillas. John McCone, a wealthy and opinionated Republican chosen by Kennedy to replace CIA Director Dulles after the Bay of Pigs, was on hand to brief the president on such covert matters. Joining McCone was Des FitzGerald, the Far East chief; James Critchfield, head of the Near East Division, was touring Beirut at the time. [24]
By meeting's end, it was decided that Harriman would lead a high-powered delegation to New Delhi to more fully assess India's needs. General Paul Adams, chief of the U.S. Strike Command, was to head the military component. From the CIA, Des FitzGerald won a seat on the mission, as did the head of the Tibet Task Force, Ken Knaus. Rendezvousing with them in India would be Critchfield, who received an emergency cable to depart Lebanon immediately for the subcontinent.
On 21 November, Harriman's entourage departed Andrews Air Force Base in Maryland. Although the Chinese declared a unilateral cease-fire while the group was en route, the situation was still tense when it reached New Delhi the following day. Without pause, Ambassador Galbraith ushered Harriman into the first of four meetings with Nehru. The end results of these discussions were plans for a major three-phase military aid package encompassing material support, help with domestic defense production, and possible assistance with air defenses.
As a covert aside to Harriman's talks, the CIA representatives on the delegation held their own sessions with Indian intelligence czar Mullik. This was a first, as Galbraith had previously taken great pains to downscale the agency's activities inside India to all but benign reporting functions. As recently as 5 November, he had objected to projected CIA plans due to the risk of exposure. But in a 13 November letter to Kennedy, the ambassador had a qualified change of heart, noting that Menon's departure was a turning point to begin working with the Indians on 'sensitive matters'.
Both the CIA and the Intelligence Bureau were quick to seize the opportunity. "I went into a huddle with Mullik and Des," recalls Critchfield, "and we started coming up with all these schemes against the Chinese." Most of their ideas centered around use of the Tibetans. "The Indians were interested in the Tibet program because of its intelligence collection value," said station chief David Blee, who sat in on some of the meetings. "Mullik was particularly interested in paramilitary operations." There was good reason for this: following Menon's resignation, and Gyalo Thondup's stated preference, the Intelligence Bureau had been placed in charge of the 5,000 Tibetan guerrillas forming under Brigadier Uban.
Mullik was cautious as well. Although he was well connected to the Nehru family and had the prime minister's full approval to talk with the CIA, he knew that the Indian populace was fickle, and until recently, anti-Americanism had been a popular mantra. It was perhaps only a matter of time before the barometer would swing back and make open Indo-U.S. cooperation political suicide. To offer some protection against this, Mullik and one of his close deputies, M. I. Hooja, made a special request during a session with FitzGerald and Blee. "They made us promise that our involvement," said Blee, "would remain secret forever."
By the end of the Harriman mission, the CIA and Intelligence Bureau had arrived at a rough division of labor. The Indians, with CIA support from the Near East Division, would work together in developing Uban's 5,000-strong tactical guerrilla force. The CIA's Far East Division, meantime, would unilaterally create a strategic long-range resistance movement inside Tibet. The Mustang contingent would also remain under the CIA's unilateral control. 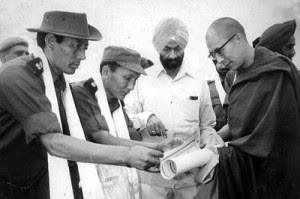 I post below an article I wrote for Rediff.com on January 08, 2003 on the 'The Phantoms of Chittagong', the Special Frontier Forces of Maj. Gen. SS  Uban, based at Chakrata in Uttarakhand.
The context of my article was a personal attack on the Dalai Lama, while he was preaching the Buddha's gospel in Bodh-Gaya.
I had earlier published on this blog, an excellent article of Manas Paul (Phantom Warriors of 1971: Unsung Tibetan Guerrillas).