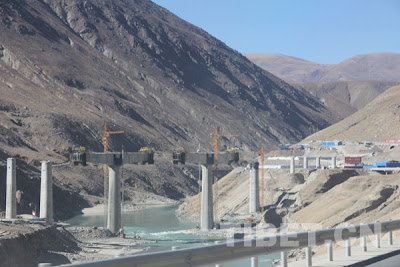 While the delegates of the CCP's 18th Congress are busy selecting their next leaders and the foreign media speculates on who will be the new Emperors of China, the infrastructure development continues at a quick pace in Tibet; it moves towards the Indian border.
According to China Daily, Jampa Phuntsok (alias Qiangba Puncog for the Chinese), the Chairman of the Standing Committee of the Tibet People's Congress and Padma Choling, the Chairman of the Tibetan Autonomous Region gave a press conference on the side of the Congress to boast about the new railway line to Shigatse which will later be extended to Nyingchi, north of the McMahon Line.

Another article on China Tibet Online also mentions this first stage of the project, the Lhasa-Shigatse railway:


The railway linking Lhasa and Shigatse in southwest China's Tibet Autonomous Region is under construction as an extension line of the Qinghai-Tibet Railway.
The construction started in 2010 with a total investment of 10.8 billion yuan as a key project of the Central Government.
The railway runs 253 kilometers with a designed transportation capacity of over 8.3 million tons every year. The construction work is estimated to finish in 2014.
Designed with the top national standard, the railway will run at a speed of over 120 km per hour and stop at 13 railway stations including Lhasa South, Quxu, Nyemo and Shigatse.

India, busy with different scams and cricket matches, is still half asleep.

Qiangba Puncog: Transport boost for Tibet
China Daily
12-11-09
New railway line among measures to improve flow of passengers, goods in region Construction of a new railway linking Lhasa, capital of Tibet, and Nyingchi prefecture in the region's southeast will start very soon, Padma Choling, chairman of the autonomous region, told a group discussion at the 18th National Congress of the Communist Party of China in Beijing.
He did not disclose details of the route or budget for the line.
Media reports in April said the 435-km-long Nyingchi-Lhasa Railway is part of the proposed Sichuan-Tibet Railway, linking Chengdu in neighboring Sichuan province and Lhasa.
Upon completion, the journey between Lhasa and Nyingchi, which now are linked by car and airplane, will be shortened to less than two hours from the current more than nine hours' drive.
The Sichuan-Tibet Railway will be 1,900 km long, with investment of about 130 billion yuan ($20.8 billion) in State funds. Construction will take six years, according to the Tibet Daily. 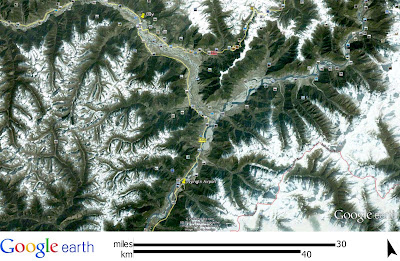 Construction work will be difficult, having to overcome frozen earth, landslides, rock slides, cold weather and lack of oxygen due to high altitude in some places.
On Thursday, a senior Tibetan legislator also said another railway, between Lhasa and Xigaze, will begin operating by the end of 2014.
"Construction of the railway has been progressing well despite some geological difficulties," Qiangba Puncog, chairman of the Standing Committee of the Tibet People's Congress, said on the sidelines of the Party congress.
The line from Lhasa to Xigaze is the first extension of the world's highest-altitude rail link, the Qinghai-Tibet Railway, which opened in July 2006.
Posted by Claude Arpi at 5:52 AM