A New Road to Bhutan 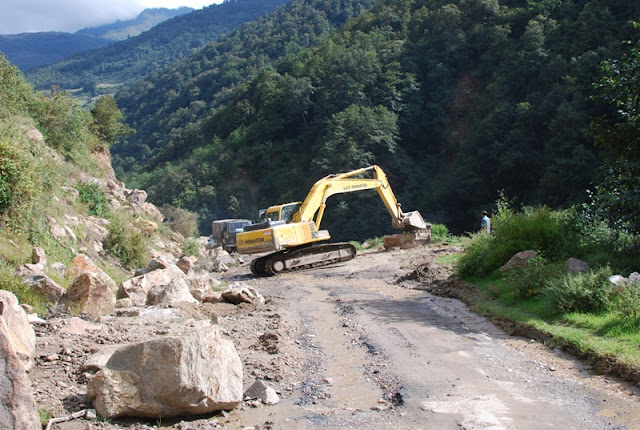 The Arunachal Pradesh Gaon Bura Association (village headmen) has requested the King of Bhutan to complete a portion of the road linking Tawang district of Arunachal to the Dragon Kingdom.
That would be a welcome development.
Tawang area and Eastern Bhutan have always had friendly cultural contacts.
Had not the ancestors of the 'Monpa' Dalai Lama, Tsangyang Gyatso (1683-1742) migrated from Bhutan?
I quote here from my book The McMahon Line Saga:


One question was bothering the Government in Delhi: where is the frontier between Tashigang’s district of Bhutan and the Balipara Frontier Tract? The question came for discussion in 1933 and two years later, it was finally agreed between the two Governments that a joint team of officers would inspect the ground. This gave the pretext for the first visit to Tawang by a British officer after the 1914 border Agreement.
Captain G. Lightfoot, the Political Officer in Balipara spent five days in Tawang (from April 10 to 14, 1936); he also visited Lumla where the negotiations with the Bhutanese took place. The settlement of the Central Monpa boundary was eventually successfully concluded.
Lightfoot did not have at that time any special orders from his government to look into the presence of the Tibetan administration in the area.
Lightfoot’s report dealt mainly with the question of the boundary with Bhutan. The presence of the Tibetans was however mentioned.
On his return there was an immediate reaction from the Assam Government.
The Chief Secretary wrote to the Government of India May 29, 1936, pointing out “the authority of the two Tsona  Dzongpons Ragashah and Gaden did not extend south of the Manda-la and Bomdila Line.”
He also informs us that of the Rs. 5,000 posa [tribute], Rs. 1,122 is sent by the Tawang Monastery to Lhasa where the amount is paid to Drepung Monastery and Rs.522 retained by the Tibetan Government. The balance of Rs. 3,878 is divided among the Dzongpons of Tawang and Tsona Dzongs.
The location of the Bhutan-Tawang boundary was subsequently entered on the Survey of India quarter-inch sheet maps.
The simple fact of discussing the border with Bhutan, west of Tawang was a proof that the British had decided to reassert their rights accrued from the 1914 Agreement.
Lightfoot also took the opportunity to inform the local representative of the Tsona Dzongpons that the area was Indian and the Monpas were British citizens.

Two years earlier, the area had been visited by the famous British botanist Frank Ludlow and his colleague George Sheriff. It was then the shortest and easiest way to reach Tawang from India:


We reached Trashigong [Tashigang] on the 2nd March [1936] and were received with great hospitality by our good friend the Dzongpon whom we had met in 1934. In his early days he had been a mendicant monk, and had travelled extensively in Bhutan and Tibet. Then, abandoning his vagabond life, he had settled in eastern Bhutan where his administrative ability was soon recognized, and he became governor of an important frontier district.
At Trashigong we received a present of two maunds of fresh butter from His Highness the Maharaja, and one of a maund from the Dzongpon, so we did not suffer from a deficiency of fats in our diet. This supply lasted for many months, and never became rancid. We were informed that no preservative was used in its preparation, that it was washed thoroughly, and that it would keep fresh until we had finished it. We were skeptical, but fresh it remained. Why, I cannot explain.
Lumsden had many patients during the three days we spent at Trashigong. Goitre was very prevalent, also leprosy, and there were several cases of cataract. 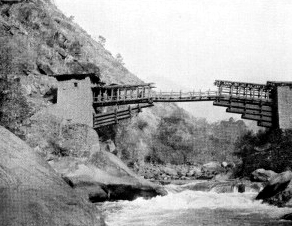 ...We returned to Trashigong on the 18th March and left the following day for the valley of the Nyam Jang Chu. A steep descent of a thousand feet brought us to a fine chain suspension bridge over the Dangme Chu, or Manas river. This bridge is approximately 200 feet long, 6 feet broad, and hangs 50 feet above the river. The footway and sides are of bamboo matting to permit the passage of animals such as ponies and cattle. The iron links of the chains are a foot in length, and the chains themselves are attached to wooden blocks built into masonry piers at either end. This is the only chain suspension bridge I have ever seen in Bhutan, but there are several in Tibet. There is one, for instance, over the Tawang Chu; a second spans the Sutlej at Toling; and in former days a third bridged the mighty Tsangpo at Chaksam near Lhasa. Who forged the iron links of these chains? The answer to this question I have never discovered. The local inhabitants are entirely ignorant of their history.

More recently a problem cropped up about the border between Bhutan and Tawang district. Bhutanese officials visited Tawang in order to get a road rectified; according to the Tashigang's Dzongda (DC) it encroached on Bhutan's territory.
The Bhutanese newspaper Kuensel reported:


A visit to Arunachal Pradesh, India by the dzongda [District Commissioner] and some gewog officials helped to resolve the issue
District officials in the neighbouring Indian state of Arunachal Pradesh have agreed to rectify the road construction that has encroached Bhutanese soil in Dongshingma, Yalang gewog, Trashiyangtse district administration officials say.
Trashiyangtse dzongda Sangay Duba and gewog officials from Yalang and Toedhtsho visited Tawang, the capital of Arunachal Pradesh [sic], a few weeks ago, where the agreement was reached.
“We hadn’t met our neighbouring district officials before, so our visit was more of a courtesy call,” Dzongda Sangay Duba said. “We also apprised them of some issues, including encroachment at Dongshingma.”
The international boundary office in Thimphu earlier reported that a road construction from the Indian side had entered Bhutanese soil by around 10m.
“When a team from Toedtsho and Yalang gewogs visited local officials in Bongling to resolve the issue, our team was told the issue be taken up with Tawang,” Toedtsho gewog officials said.
The team was also told by locals that the encroachment was accidental.  They reasoned contractor’s discrepancy during construction as the cause for encroachment.
“To resolve this issue, they’ll probably have to discuss among themselves to verify the alignment,” dzongda Sangay Duba said. “If our presence is needed at the site to rectify the alignment, they may draw our attention.”
The team also learnt that the deputy commissioner (DC) in Tawang wasn’t even aware of the encroachment.  The letter, the dzongkhag administration had written and sent more than a month ago, had not reached Tawang.
“Our letter hadn’t reached Tawang. I don’t know if we got the address correct,” Sangay Duba said. “But we handed the DC a copy.”
Tawang has also been informed to apprise its people to refrain from entering other parts of Bhutan via Trashiyangtse without possession of valid immigration documents.
Toedtsho gup Dechen Wangdi said that people from Tawang would not be allowed to travel beyond Chazam in Trashigang without valid documents.  This was to prevent Tawangpas from getting stranded in Bhutan.
Tawangpas, wishing to travel to other parts of Bhutan, can enter only from designated entry points in Samdrupjongkhar and Phuentsholing.
Meanwhile, dzongkhag officials said that no border disputes have been reported from Bumdeling, which shares a border with China. “Our people are monitoring the boundary pillar and, according to their report, everything is fine,” Sangay Duba said.
The international boundary office is also following up on a missing border pillar KT-2, between Buri in Tawang and Jangphutse under Teodtsho gewog in Trashiyangtse.

Let us hope that the King of Bhutan will agree to the request from the Arunachal Government and the village headmen. It could help dis-enclave Tawang district which today depends of the road presently widened by the Border Road Organization. 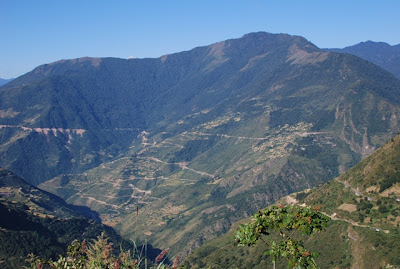 Arunachal body appeals to Bhutan to complete Lumla-Tashigang Road
Lumla , Thu, 22 Nov 2012 ANI
Lumla, Nov 22 (ANI): The Tawang unit of the powerful Arunachal Pradesh Gaon Bura Association has urged the King of Bhutan to give permission to build the Bhutan portion of the Lumla-Tashigang Road.
The demand comes even as the Arunachal Pradesh Government led by Chief Minister Nabam Tuki has taken the initiative to construct the Lumla-Tashigang Road.
The Indian government of late has shown keen interest to build the Lumla-Tashigang Road to reduce the distance between Tawang, which houses the world-famous Tawang Monastery, and Guwahati, the gateway to North East India, by about 200 km and travel time by almost six hours.
Currently, it takes around 15 hours to travel from Tawang to Guwahati via Bhalukpong and Tezpur, a distance of about 600 km.
The road is not fair-weather because of Sela pass located at an altitude of 13,700 feet while the 400 km Tawang-Lumla-Tashigang would be a laissez-faire road and help reopen the age-old traditional border trade between the people of Bhutan and Tawang district.
The district GBs led by president Kota Lama, in a memorandum, has pleaded with the Bhutan King for permission to rebuilding of hardly 10 km road which would complete the road.
Pointing out that the people of Bhutan and the Monpas of Tawang district have the same religion, culture and traditions, the GBs said that since olden days the people of Tawang used to visit religious places, like Gombay Kora, Durang Chorten, Gonja Ney, Tango Ney, Thimpu Dzongkha etc. in Bhutan while the Bhutanese used to visit for pilgrimage to Tawang Monastery, Gorsam Chorten, Zangdopari Gompa, Taksang Gompa, Urgelling Gompa, Khinmay Gompa, Lhu-gyepu Phobrang (Muktur), Thongmin Gompa, Manma-Gyalam Ney, Thanga-Fe Ney, Banga Jang Ney, Sarong Gompa, Changbu Gompa, Gomshin Ney etc with great difficulties by undertaking foot march for days together.
It said road connectivity would facilitate easy movement of people from both the countries.
The opening of Lumla-Tashigang road would also be useful for the Indian Army guarding the border, said Tawang District Seva Dal chief organizer Lobsang Dawa, while appreciating the CM for his assurance on reopening of the road soon in his address during the recent Tawang festival in presence of AICC general secretary Rahul Gandhi.
The proposed STOL (Short take off a and landing) airport at Lumla would be a boon for security of the nation as Lumla's weather remains conducive for air operation, commented Lumla circle anchal chairperson Lobsang Yonten.
Yonten's comment supports the recent statement of Air Chief Marshal Norman Anil Kumar Browne that the outcome of 1962 Chinese aggression would have been different had India used air power.
Attn: News Editors/News Desks: The views in the above article are those of Mr. Pradeep Kumar, Editor-in-Chief of the Arunachal Front. By Pradeep Kumar (ANI)
Posted by Claude Arpi at 6:18 AM

Hi! Has the Tawang-Lumla-Tashigang road been completed? I am traveling to Bhutan in Oct/Nov and am looking to get to Tawang directly from Thimphu, without going through Guwahati/Tezpur. Any info would be helpful. TIA.