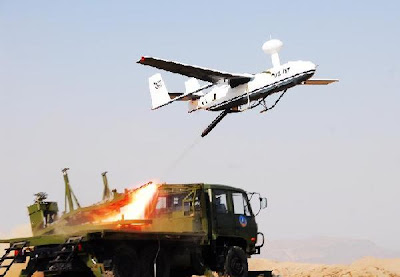 Hi, sir, I am Hari, working as an Engineer in UK. From my name, you can understand , am Indian, by nationality. I am following your blog for the past few days.
As I read most of your researched writings about Indo-china war in 1962, I could understand the problem faced by Indian army,in that period.

This topic, which I am commenting on does not mention the projects of DRDO's branch Aeronautical Development Establishment and National Aerospace Laboratories, of CSIR.
The UAV's that can be mentioned are DRDO Nishant, DRDO Lakshya, DRDO Rustom - I, DRDO Netra, all in service, which are indigenous.
And When it comes to high altitude, DRDO Nishant flies upto 3600m, DRDO Lakshya till 9000m, DRDO Rustom till 8000m - all in the same service ceiling range of the above mentioned Chinese UAVs.
Apart from this India uses israeli drones, such as IAI heron, harop, harpy and searcher, in large numbers, for surveillance.
And also NAL(National Aeropace Laboratories) have produced Micro air vehicles , like NAL pushpak, Golden Hawk and Black kite.
So, I feel DRDO is going in the right direction, in UAV research.
And the rustom 2 which is under development will be another UCAV other than AURA UCAV.AURA UCAV is compared to BAE taranis, Dassault Neuron and Boeing phantom ray projects, not like small ones as MQ-9 reaper, compared by chinese dark sword and blue shark UCAV.

I am commenting for the first time in a blog.

I may be wrong also.