The Change inside China

This article of The New York Times demonstrates that some Chinese have the courage to honestly look at the situation in Tibet.
In 2008, as a postscript to my book Dharamsala and Beijing: the negotiations that never were, I had mentioned the work undertaken by Xu Zhiyong's think-tank, the Open Constitution Initiative:


The only change in view is a change inside China. Interestingly, a report prepared by a Chinese think-tank, Open Constitution Initiative or Beijing Gongmeng Consulting on the 2008 riots in Tibet is an eye-opener. It entirely contradicts the Party’s official version. The authors, Li Kun, Huang Li, Li Xiang and Wang Hongzhe are lawyers “committed to building a modernized China and promoting human rights, democracy, and rule of law in China.”
Their research team spent one month in Tibet “interviewing Tibetan monks, nomads, farmers, scholars, migrants, artists, and business people”. Their objective was to come into personal contact with voices which can give “a clear and objective outline of ordinary people’s living conditions in Tibetan areas.”
The lawyers first point out “major errors in government policy” after the March–April 2008 protests. One was ‘over-propagandizing of violence’; another, encouragement of racist sentiment towards Tibetans: “The excessive response of the government all over Tibet was to regard every tree and blade of grass as a potential enemy soldier.”
According to them, this further strained the relations between the local Tibetans and the Han migrants. One of their conclusions is: “Understanding is a precondition for discussion, unity and development. If the promotion of healthy development in Tibetan areas is truly desired then there must be a change in thinking and an adjustment in thinking behind the current nationality theories and policies.”
‘Stability in ethnic areas’ has for a long time been essential to the Central Government policies. The leadership in Beijing (and probably even more the PLA) emphasized the importance of stability to ‘defend China’s borders’. Soon after the Tiananmen massacre, in October 1989, the “Summary of the Central Politburo Standing Committee’s Forum on Tibet Work” already pointed out two main issues ‘to firmly grasp the Tibet work’: stability of the political situation and economic development. Since then the dual mantra has been constantly repeated, though ‘stability’ has never been achieved. The Lawyers’ report has tried to find out why.
According to them, one of the issues which makes Tibet (and China) so unstable is the emergence of a new aristocracy. The Chinese Revolution is supposed to have wiped out the old aristocracy and emancipated the masses. This has not happened.
The Report found that in Tibet, the difficult terrain has created “locally fixed power networks, which inevitably lead to a high incidence of corruption and dereliction of duty.” For the Chinese lawyers, this new aristocracy, which is ‘legitimized by the Party’, is even more powerful than the old one.
The Report analyses in detail the rapport between the new aristocracy and the masses: “there is a lack of any effective supervision over the local officials. …‘Foreign forces’ and ‘Tibet independence’ are used by many local officials as fig leaves to conceal their mistakes in governance and to repress social discontent …elevating everything to the level of splittist forces in order to conceal their errors.”
The final conclusions are not far from the Tibetan Diaspora’s views: “Earnestly listen to the voices of ordinary Tibetans and on the basis of respecting and protecting each of the Tibetan people’s rights and interests”.
Regarding ‘stability’, the Lawyers’ conclusions are lucid: “Due to the special nature of the political environment in Tibetan areas, ‘stability’ in the state’s Tibet policies has special significance. The Center considers that, ‘If there is not a stable social environment, then all talk of development is empty’. Even though ‘development and stability’ are the two trains of thought for government work in ethnic areas, in the actual exercise of power, ‘stability’ takes on an overwhelming importance.” The problem, according to the Report, is that “there are many people who have learned how to use stability to protect themselves”.
A similar conclusion was arrived at in the 70,000 character petition sent by the previous Panchen Lama to Premier Zhou Enlai in 1962, for which the former spent 17 years in jail.
This report has not pleased everybody in Beijing.
Xu Zhiyong, one of the founders of the Open Constitution Initiative has been arrested early August and since then he has been released on ‘bail’, though it is not very clear what ‘bail’ means in China. Will he be able to continue to do his work on human rights and other ‘hot’ topics? Doubtful!

The fact the Xu can still speak is a positive sign, a sign that China is slowly changing. 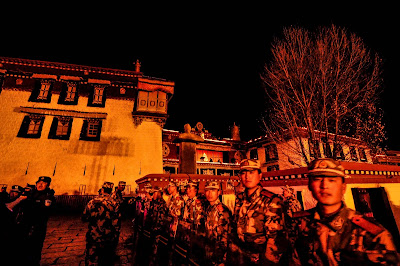 Tibet Is Burning
The New York Times
December 12, 2012
XU ZHIYONG
Beijing: AROUND noon on Feb. 19, an 18-year-old named Nangdrol set himself on fire near the Zamthang Monastery in the northeast Tibetan town of Barma. In a note left behind, he wrote, “I am going to set myself on fire for the benefit of all Tibetans.” Referring to China’s ethnic Han majority as “devils,” he added, “It is impossible to live under their evil law, impossible to bear this torture that leaves no scars.”
Over the last three years, close to 100 Tibetan monks and laypeople have set themselves on fire; 30 people did so between Nov. 4 and Dec. 3. The Chinese government is seeking to halt this wave of self-immolations by detaining Tibetans it accuses of being instigators. Meanwhile, the scarless torture continues.
I first visited China’s far west 21 years ago with college friends. Back then it at least looked peaceful, but now, sad news arrives daily. When I returned in October, a young monk invited me to visit his monastery. Passing a checkpoint where a red banner read, “Stability Maintenance Calls for Fast Response to Emergencies,” he told me how he hated the sight of armed soldiers.
Because a road was closed for construction, I had to wait until evening to hitch a ride to Barma, where Nangdrol had lived, about 30 miles away. I was the third passenger in the car; the other two were young Tibetans.
“Are you Buddhist followers?” I asked them. One of them showed me a pendant portrait of the Dalai Lama that he pulled out from his chest. “He is our true Holiness,” he said.
“Have you heard about the self-immolations? Like, burning oneself?” I asked tentatively, finally broaching the topic. They knew about it.
“Pardon me, but do you hate the Hans?” I asked them because Nangdrol had used the term “Han devils” in his suicide note. They’d heard about Nangdrol. When I told them I was there to visit Nangdrol’s parents to express my sadness, they told me more.
They said they’d been to the site, as hundreds of Tibetans had. People had set up white tents at the intersection where he died. “He is our hero,” one said.
It was dark when we arrived in Barma. At a lamppost, one of my fellow passengers asked a man for directions but was waved off. At a crossroads, he asked two men on motorcycles and an argument broke out. A monk came to the window to examine me.
“Sorry,” my fellow passenger said, “they scolded me for taking you here.” A minivan approached. Two men jumped out of it and upbraided him indignantly. Fear and hostility shrouded the place like night.
“We are Tibetans,” he said all of a sudden as we left Barma in silence to spend the night in a nearby town. “We are Buddhists, but we can’t go to Lhasa without a permit.” Years ago, you could see many Tibetans on their pilgrimage to Lhasa, but not anymore.
The next day, I returned to Barma. I asked a young monk, on his way to fetch water, about Nangdrol. He took me to a hall where a middle-aged monk sat cross-legged in a corner. Since I didn’t have Nangdrol’s photo with me, he said he couldn’t help me.
A teenage monk asked several of his peers but got no answers. Passers-by shook their heads. At a construction site, no one had heard about him either. In the town’s elementary school I asked an armed soldier guarding the gate. I’d read that Nangdrol was a student. The soldier suggested that I check out the nearby compound where a Chinese flag flew, but people told me the town had no secondary school.
The road back from Barma was open only from noon to 1 p.m. I had to leave. Along a creek, a row of poplars basked in the golden sun, and a group of young monks in crimson robes were holding a class. Reluctantly, I climbed into a cab. I had been to many places over the years but never felt so lost.
I stopped the driver a mile or so down the road when we passed by a village on a slope. After my repeated pleadings, the roadside shop owner gave me directions to Nangdrol’s home. Up on the slope, an old couple pointed to the house.
It was a small mud-plastered house enclosed in mud-brick walls, and five tall sutra streamers flew on one side of the property. The iron gate was locked.
A middle-aged woman with a boy, passing by, said she had known Nangdrol. His parents now live on a faraway cattle farm, she said. The day of his death, she told me, he wore new clothes, and he was freshly bathed, with a fresh haircut. He asked people whether he was handsome.
I didn’t know how else to express my sorrow. I asked the woman to give 500 yuan (about $80) to Nangdrol’s parents, letting them know that a Han Chinese man had come to pay his respects.
I am sorry we Han Chinese have been silent as Nangdrol and his fellow Tibetans are dying for freedom. We are victims ourselves, living in estrangement, infighting, hatred and destruction. We share this land. It’s our shared home, our shared responsibility, our shared dream — and it will be our shared deliverance.
Xu Zhiyong, a lawyer and human rights advocate, is a founder of Gongmeng, the Open Constitution Initiative. This essay was translated from the Chinese by Yaxue Cao.
Posted by Claude Arpi at 7:26 AM