The official 'profile' of Wang Qishan, the new member of the Standing Committee of the CCP's Politburo says: "He can do it".
This comment was posted on Xinhua website "after Wang Qishan took up a challenging new mission last month to lead China's top discipline watchdog [Central Commission for Discipline Inspection], amid rising calls for crackdown on corruption".
Xinhua added: "Simply more than a month into his new role, Wang has demonstrated the same style that previously won his fame as a troubleshooter in the economic field: tough, resolute and confident in front of difficulties."
Wang told a symposium at the end of November: "Ethics of the Party determines its survival or demise... In the fight against corruption, we can not attain our goal at one stroke. We must convince the public that we are making more and more concrete efforts and delivering more and more powerful blows."
One of these blows is to recommend the 19th-century classic on the French revolution (“The Old Regime and the Revolution”) written by Tocqueville.
As the article of Global Voices posted-below shows, this has attracted thousands of comments on the Chinese blogosphere.
Does Mr. Wang mean that China could go through a French Revolution?
By recommending Tocqueville's book, Wang probably wants to highlight the dark sides of the French Revolution, which helped Europe to come out of the 'regime of privileges', Old Regime in Tocqueville's words.
This reminds me of one the last speeches of Danton, the great French revolutionary:


We broke the tyranny of the privileges by abolishing them and offer men the powers to which they are entitled.
We ended the monopoly of birth and wealth in all important offices of State, in our churches, in our armed forces, in all parts of this beautiful country, France.
We declared that the most humble man in this country is equal to the greatest.
The freedom that we have gained for ourselves, we have given it to all the slaves in the world.To the world, we have entrusted the mission to build the future with the hope to which we have given light.
This is more than a victory in a battle, more than swords and guns and all the cavalry of Europe!
And this inspiration, this new breath for all men, everywhere, this appetite, and this thirst for freedom, nobody should ever be allow to stifle it.

By in the case of China, the tyranny of privileges are born with the Party.
To give the common men the powers to which they are entitled, was the first objective of the Chinese Revolution in 1949. Isn't it?
This has abysmally failed; it is good that the leaders are today becoming aware of this failure (it does not seem the case in India as yet).
Will Xi Jinping and his colleagues manage to return to the basics, and bring offer a 'true' revolution to China?
It is doubtful, because they themselves belong to the system which has failed.
In any case, the French Revolution itself failed as beautifully explained by the great Indian Rishi, Sri Aurobindo:


Freedom, equality, brotherhood are the three godheads of the soul; they cannot be achieved through the external machinery of society or by man as long as he lives only in the individual and communal ego. When it asserts equality, it arrives at strife, then at an attempt to ignore the variations of nature, and, as the sole way of doing that successfully, it constructs an artificial and machine-made society. A society that pursues liberty as its ideal is unable achieve equality; a society that aims at equality will be obliged to sacrifice liberty. For the ego to speak of fraternity is for it to speak of something contrary to its nature. All that it knows is association for the pursuit of common egoistic ends and the utmost it can arrive at is a closer organization of the equal distribution of labor, production, consumption and enjoyment.

But a small dose of 'equality' and 'freedom', if not of 'brotherhood' could certainly help China to become a Great Power.
The same remarks apply to India. 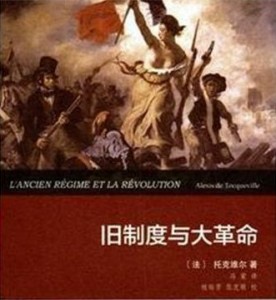 Thanks to China's top officials, French historian Alexis de Tocqueville’s “The Old Regime and the Revolution”, a 19th-century classic about the French revolution, has become a best seller in China. According to a report on Business Week, after Chinese Communist Party Vice Premier Wang Qishan highly recommended this book, it sold out in many bookstores in Beijing.
Chong Ming, a history professor who studies Alexis de Tocqueville explained:


Many civil servants read it just to follow leaders’ interests. In China, officials have a big influence on the political culture.

Why did Chinese officials suggest this classic on the subject of revolution? Scholars started heated discussions on the Chinese social media and blogosphere.
A search of “The Old Regime and the Revolution” on Weibo yields 235,416 results, crackling with quotes from the book:

Great revolutions that have happened historically, such as violent revolutions, did not occur during a time of poverty. They occurred when economic situations brought polarization to society. This is because at times like these, conflict between social classes is incited. It is easy for those in the bottom classes of the society to turn the flames of their anger into flames of war.

Some scholars think that the social background at the time of French Revolution is very similar to the conditions in today’s China.


Like then in France, China has been through a lot of wars and revolutions in the past, now China is experiencing a transitional period with a centralized power and booming economy. Perhaps this is why the book has touched the nerves of Chinese leaders. I think they are not recommending this book to express their opinions against the reform, because if they thought the book is just about the danger of reform, they would censor it. It is more likely that they try to make people realize the necessity of reform: it is not to be delayed, otherwise, we will face great danger. To some extent, reform is the best way to avoid revolution.

One netizen echoed on Weibo:

银幕街一号 : In the book “The Old Regime and the Revolution,”  the description of the social conflict in France before the revolution and its development is a lot similar to today's China. If they remove the word “France”, it's like a high resolution picture of Chinese society. Due to the improvement of material life and increase in wealth, the amount of ignorance, arrogance, greediness, dissolution, shamelessness and depravity compared to the old days before the revolution in France is simply greater.

Tocqueville discusses: why do people lose more freedom after a revolution that is meant to gain more freedom? The book reminds us of the danger of centralized power, it also reminds us that  corruption will lead to failure.

Is it because the top officials predict that a similar large-scale incident like the French Revolution will break out in China anytime? So they use the book as a warning to the whole society? Perhaps Tocqueville's “The Old Regime and the Revolution” serves as a mirror? Even so, this is not a bad intention, as it suggests that the leaders are clear-headed and that they are not fooled by the illusion of the so-called “ten golden years” in the past decade.


告诫提示一方面是针对各级官员的，如果缺乏危机感，“中国式大革命”同样会在不经意中存在爆发可能性，其针革命的对象会是 各级官员。因此，不让民众革官员的命，就必须统一思想，回到坚定推进市场化的经济改革和法治化。告诫提示另一方面是针对全社 会的，对于自由和民主的追求， 不能一蹴而就，法国大革命后雅各宾专政时期实行的“激进的人民民主”在中国的 “文化大革命”中已有过充分的表现。中国所要选择的民主，应是在中国共产党领导下逐步实行宪政民主。
On the one hand the warning is for officials at all levels: without a sense of crisis, “the Chinese Revolution” might take place. The only way to prevent this is to promote market-oriented economic reform and the rule of law. On the other hand, the warning is for the society as a whole: the pursuit of freedom and democracy can not be done overnight. After the French Revolution the Jacobin dictatorship of “radical people's democracy” can be found in China's “Cultural Revolution”. China's democracy should be realized step by step under the Chinese Communist Party.

It's better to watch what they actually do than to listen to what they say and try to guess what it means.