The Radar over Tibet

According to China Military Online, this picture shows "the combat-readiness highway leading to the Ganbala PLA radar station in Tibet of China".
Ganbala (Chinese) is Kampala in Nagartse County of Lhoka/Shannan Prefecture.
It is another first for the PLA is Tibet: a very good road has been built to serve the highest radar station in Tibet.
Kampala is the last pass in Nagartse county, before reaching Lhasa valley. Nearby is the stunningly beautiful Yamdrok Yumtso  Lake, one of the three largest sacred lakes in Tibet. It is over 72 km long. The lake is surrounded by many snow-capped mountains.
This radar station already appeared in the news in 2008 when some soldiers were  demobilized from the radar regiment of the PLA Air Force.
An article in the China Military Online website had shown the veterans of the radar regiment "saluting the national flag at the Ganbala [Kampala] radar station with an elevation of 5374 meters on November 26, 2008. More than 100 veterans who ever worked in the Ganbala radar station returned to the radar station that day to bid farewell to the place where they started their military service." 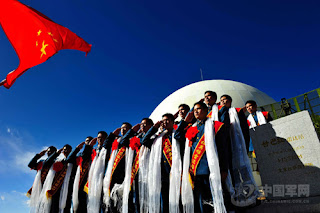 In an earlier posting (Drones and Toilets), I mentioned  the fast infrastructure development in Tibet.
Last week, another article in China Tibet Online spoke of the 'Tibetan highway gains leapfrog development'.


With the fastest construction speed, most investment, and constantly improved management system, Tibetan highway transportation has acquired the most noteworthy construction achievements, bringing the rural highway construction a historical leap to a better stage of best and fastest development.
Back to the old days, Tibetan highway construction was left behind due to its bad natural conditions and weak economic base.
Since 2001, budget and investment for Tibet highway construction has been expanded. With 53.3 billion yuan (about $8.56 billion) investment, the Tibetan highway total distance has increased from 39760 kilometers to 63108 kilometers by the end of 2011 at a growth rate of 58.7%.
The amount of newly built and rebuilt highway in the past decade exceeds the sum total of that in the previous 50 years after the Tibet Peaceful Liberation. The airport expressway between Lhasa and Gunga fulfils the zero breakthrough of Tibetan expressway. The opening of the Galongla tunnel on Mutuo [Metok, north of the McMahon Line] highway ends up the highway-less history of the last county in China.

Tibetan road network has made breaking through development by increasing 265.4% of the previous 10,647 km highway roads that can be graded at the level of political unit. So far, 60 counties in Tibet have had asphalt road.
Meanwhile, the passenger transport network also has a primary formation. Now there are 30,000 commercial cars in the whole Tibet Autonomous Region. Accordingly, the passenger transport routes has risen from less than 100 to 353, covering 98.6% Tibetan counties and 61% Tibetan rural towns.

The Risur Bridge Highway is 94 kilometers long. It is reported that the project adopts the Level 4 technical standard of road construction, with a design speed of 20 kilometers per hour, 6.5 meters width of roadbed and 6 meters wide pavement. The whole project will be invested with 399,925,519 yuan (about $64.3 million) and its overall construction will last for 18 months.
The newly built highways along with the old ones will bring together great opportunities to Tibet’s development. Tibetans believe that their life will become better and better owing to the highways that lead them to wealth.

And of course, all these roads have a dual use (civil and military).
Once again, it is time for India to wake up.

The Radar over Tibet
Combat-readiness highway for highest PLA man-controlled radar station completed
China Military Online
2012-12-03
A delivery ceremony for the main part of the construction project of a combat-readiness highway for the Ganbala radar station of the Air Force of the Chinese People’s Liberation Army (PLA) was held on the morning of November 21, 2012.
The Ganbala radar station is the highest man-controlled radar station in the world with a height of 5,374 meters above the sea level. The project of the highway, measuring 9 kilometers in length, was undertaken by the Office of Traffic and Combat Readiness of the Tibet Autonomous Region and the Military Transportation Department under the Logistics Department of the PLA Air Force. After nearly 15 months of construction since September of 2011, the completed combat-readiness highway, featured with standard and scientific designs in protection and drainage systems, costs over 29 million yuan (about 4.7 millions US $).
Prior to the construction, the highway was a winding sand road which, in frequent rains and snows, witnessed landslides and debris flows from time to time. Being only 9 kilometers in length, it used to take nearly an hour of drive, but now, it takes less than 15 minutes.
According to leaders from the Military Transportation Department of the Logistics Department of the PLA Air Force, all the radar stations on the snowy plateau will have the class-4 highways built according to national standards under the joint efforts of military and civilian sectors.
(By Xu Wei, Guo Chaoying and Li Jianwen).
Posted by Claude Arpi at 5:34 AM

India can not complain about the developments, military or other wise done by PRC in Tibet or else where, What India must do ....and do fast, is not only catch up with that but out do PRC at all steps. I wish the Indian think tank reads all this and acts before our adversary reaches the finish line!!!