The New Explorers on the Roof of the World

Xinhua yesterday reported: "Southwest China's Tibet Autonomous Region has received a record 10 million domestic and foreign tourists so far this year," adding: "As of Nov. 30, the total number of tourists visiting the region had surged 22.6 percent year on year to 10.34 million, exceeding 10 million for the first time."

Can you believe it?
This reminds me of some research that I made a few years back on  Alexandra David-Neel and other French Explorers in Tibet (1846-1950).
I wrote an introduction about the unbelievable adventures of  these intrepid travelers, quoting Peter Hopkirk, the author of Trespassers on the Roof of the World:


No other land has captured man’s imagination quite like Tibet. Hidden away behind the protecting Himalayas in the heart of Central Asia, ruled over by a God-King and inhabited by a people whose only wheel was the prayer-wheel, it has long been the stuff of traveler’s dream.

The period between the mid-19th and the mid-20th century witnessed one of the greatest thrillers in the history of Asia, the Great Game.
Great empires, amongst them the British, the Russian and the Chinese fought a practically unknown war on the tracks of Central Asia and Tibet to grab new lands and bring under their suzerainty large expanses of unexplored territories.
The Game was simple, you send some adventurers or small armies in these remote regions, you annex them through treaties and later you assure the natives of your protection while trading local goods against ‘modern’ commodities. It was the way the East India Company functioned in India; a well-oiled system.
An essential part of the game was to take along cartographers and missionaries which helped establishing your own stewardship (and suzerainty) over these ‘uncivilized’ regions.
These intrepid travelers were not just explorers, professional soldiers, diplomats or mountaineers, most of them had an intelligence mission to accomplish, primarily to bring back maps and information on these uncharted places.
The best known of these ‘gate-crashers’ or ‘trespassers’, as Hopkirk call them, were Sir Francis Younghusband, Col. Nicolas Prejevaskly, Mooncroft, Kawaguchi or Rockhill.
Less known are the French explorers who at the risk of their lives criss-crossed the Tibetan high plateau and tried to enter to the mysterious and holy city of Lhasa, the seat of the Dalai Lamas.
Most of them were attracted by ‘large blanks’ on the Roof of the World’s maps. The diplomat Charles-Eude Bonin, France’s vice-resident in Indochina who tried his luck in 1895 later wrote:


there is the large blank square, white of the maps, between the Yangtze in the south and west, the road from Tatsienlou to Batang in the north and the valley of Kien-Tchang in the east. The itinerary of other explorers such as Garnier, Cooper, Bonvalot or Henri d’Orleans passes alongside this quadrilateral, without penetrating it.

How exhilarating to be the first to present a new map to the Royal Geographical Society or to its French equivalent, La Société de Géographie!
Many of them were missionaries like Rev. Huc & Gabet who are said to have reached Lhasa in 1846 and have resided in the Tibetan capital for 6 weeks. Explorer and politician Edouart Bonvalot and his companion the Prince Henri d'Orléans succeeded in their plans to travel by caravans from the Russian empire to the French ‘possessions’ (Tonkin) across the Tibetan plateau in 1889.
But there are many less known names such Duteuil de Rhins and his assistant Fernand Grenard who attempted to reach Lhasa in 1891 (Duteil being killed on his way back to China) or the scholar Jacques Bacot who explored unknown areas of Kham, the eastern part of Tibet.
Undoubtedly, the greatest amongst them was Alexandra David-Neel, the first woman to reach Lhasa in 1924. Contrary to her fellow travellers, she was not an intelligence agent; she was only interested by Tibet for Tibet and its people. She was truly in love of the mystifying land and the philosophy of its Mystic and Magicians. She once wrote:


Truthfully, I am ‘homesick’ for a land that is not mine. I am haunted by the steppes, the solitude, the everlasting snow and the great blue sky ‘up there’! The difficult hours, the hunger, the cold, the wind slashing my face leaving me with enormous, bloody, swollen lips. The camp sites in the snow, sleeping in the frozen mud, none of that counted, those miseries were soon gone and we remained perpetually submerged in a silence, with only the song of the wind in the solitude, almost bare even of plant life, the fabulous chaos of rock, vertiginous peaks and horizons of blinding light. A land that seems to belong to another world, a land of Titans or gods? I remained under its spell.

Alexandra’s numerous writings, translated in several languages, have contributed to make Tibet known the world over.
The tragedy occurred in October 1950. Tibet was invaded by Communist China. Many had foreseen that the plateau’s isolation was not to last forever. André Guibaut, who visited Tibet in 1941 had written:


Armed with small wooden pegs and sighting equipment, men [surveyors] have penetrated into Tibet’s territory... The Tibetans do not realize that these pegs are warning signs that a very ancient civilization, is condemned to disappear. Will the new roads be an improvement? The time is obviously near when it will be possible to come into Tibet by car or even by plane. Then Lama Civilization will dissolve into tourism.”

Today this ancient civilization does not exits anymore on the high plateau, though it continues to survive in exile in the Indian Himalayas.
Some will ask: “Where is the need for exploration today when anyone can install Google Earth on his computer in a few minutes?”
But is it the same?

This was then my question.
Today, new explorers have come.
They have rushed to Tibet by train or by air; most of them from the mainland China. Ten millions in 11 months, it is a lot of people.
Hopkirk's words still ring true: "No other land has captured man’s imagination quite like Tibet."
One could ask, will it change the attitude of Beijing vis-a-vis Tibet?
Though the Roof of the World is still the 'stuff of traveler’s dream', the Tibet policies of the Chinese government does not change and more and more Tibetans are resentful against the  Chinese presence.
As this article of Xinhua was published, the 94th immolation was reported. 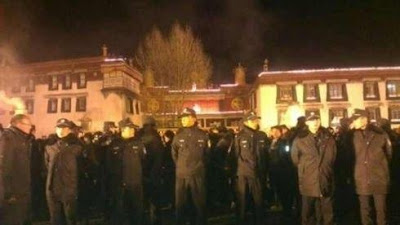 Tibet receives record number of tourists
Xinhua
2012-12-07
Southwest China's Tibet Autonomous Region has received a record 10 million domestic and foreign tourists so far this year, tourism authorities said Friday.
As of Nov. 30, the total number of tourists visiting the region had surged 22.6 percent year on year to 10.34 million, exceeding 10 million for the first time, said Wang Songping, an official with the region's tourism bureau.
Revenues in the tourism sector increased 33.9 percent year on year to 12.4 billion yuan (1.99 billion U.S. dollars), said Wang.
Wang attributed the boom to nationwide promotion efforts, improved transportation access and an increasing number of individual trips.
Tibet is situated on the Qinghai-Tibet Plateau, an area predominantly populated by ethnic Tibetans. Tourist destinations include Tibetan Buddhism heritage sites, such as Potala Palace, Jokhang Temple and the Zhaxi Lhunbo Monastery.
Nearly 300,000 people are employed in the region's tourism sector, according to government figures.
The number of tourists traveling to Tibet has grown by an average of 30 percent annually over the past five years. Last year, more than 8.69 million people visited Tibet, bringing in tourism revenues of 9.7 billion yuan. Authorities expect to see 15 million tourists annually by 2015.
Posted by Claude Arpi at 6:47 AM