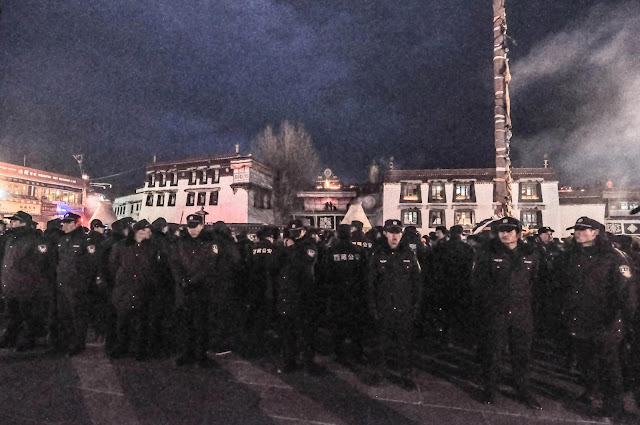 Every December 10, the world celebrates the International Human Rights Day.
The date was chosen by the United Nations' General Assembly to celebrate the proclamation of the Universal Declaration of Human Rights on 10 December 1948.
The formal establishment of Human Rights Day was decided by the General Assembly on 4 December 1950; it invited all member states and any other interested organizations to celebrate the day as they saw fit.
This year, on that day, the BJP leader Yashwant Sinha spoke in the Lok Sabha to say that China has been carrying out the 'grossest' violations of human rights in Tibet over the last 60 years, as a result of which 81 [now 95] Tibetans self-immolated.
Nobody (except the Communists, of course) can deny that human rights have been flouted in Tibet; already in 1959, the UN International Commission of Jurists reported widespread violations.
During the Zero Hour, the former External Affairs Minister rightly said that Tibetans were disturbed by "excessive use of military force, religious restrictions, disappearances and detentions, removal of nomads and degradation of ecological system in the region under Chinese rule."
A CPI (M) member, Basudeb Acharia immediately rose to link the situation in Tibet to the one in Kashmir. He alleged 'blatant' human rights violations in Jammu and Kashmir (J & K) by Indian security forces.
Without going into the intricacies of the situation of the State of J & K (and the Communist views on the subject), it is worth noticing that if the famous (or infamous) Article 370 of the Indian Constitution was applied to Tibet, the Tibetan issue would be solved according to the aspiration of the Dalai Lama and the Tibetan people.
Article 370 mentions that except for Defence, Foreign Affairs, Finance and Communications, (which are matters specified in the Instrument of Accession) the Indian Parliament needs the State Government's concurrence for applying all other laws.
It practically means that J & K citizens lived under a separate set of laws, including those related to citizenship, ownership of property, and fundamental rights.
The 1974 Indira-Sheikh accord mentioned: "The State of Jammu and Kashmir which is a constituent unit of the Union of India, shall, in its relation with the Union, continue to be governed by Article 370 of the Constitution of India."
When the Dalai Lama asks for 'genuine' autonomy for Tibet, he does not ask for more than that.
Can you imagine Tibet with its own Constitution?
It is the case for J & K.
The State of J & K also has its own flag.
I have often written about the Tibetan flag which is today banned in the People's Republic of China.
Further in J & K, Indian citizens from other States cannot purchase land or property, can you imagine the consequences of a similar clause for Tibet?
If people from Han nationality were not allowed to acquire properties on the Roof of the World or start business ventures in Lhasa or other large cities (in Nyingtri prefecture, north of the McMahon Line in particular), most of the tensions and resentment would disappear.
People of J & K have their own 'citizenship'; they are known as 'State-subjects' with their own privileges, for example, a non-State-subject can't study in a university in Kashmir.
Article 370 is so drastic that Kashmiri women marrying non-State-subjects loose their rights, particularly on properties.
This is of course questionable, but those who make a parallel between Tibet and Kashmir should think twice before comparing the situations.
Further, the violence in Kashmir has always been triggered by a neighbouring State, while the unrest in Tibet is due to the resentment of the local population against outside migrants and a 'foreign' Administration.
For the past 60 years, this resentment has manifested itself in a non-violent manner, which is not the case in Kashmir.
J & K has its own Parliament (Legislative Assembly).
Article 370 says: "The power of [Central] Parliament to make laws for the said State shall be limited to:


those matters in the Union List and the Concurrent List which in consultation with the Government of the State, are declared by the President to correspond to matters specified in the Instrument of Accession governing the accession of State to the Dominion of India...

Can you imagine, Tibet with its own Legislative Assembly or local Parliament? Federal laws from Beijing would have to be ratified by elected legislators in Lhasa!
In November 2008, the Dalai Lama's Envoys presented a Memorandum on Genuine Autonomy for the Tibetan People to the United Front Vice Chairman,  Du Qinglin. The Summary says:


The Constitution of the PRC contains fundamental principles on autonomy and self-government whose objectives are compatible with the needs and aspirations of the Tibetans. Regional national autonomy is aimed at opposing both the oppression and the separation of nationalities by rejecting both Han chauvinism and local nationalism. It is intended to ensure the protection of the culture and the identity of minority nationalities by empowering them to become masters of their own affairs.
To a very considerable extent Tibetan needs can be met within the constitutional principles on autonomy. On several points, the Constitution gives significant discretionary powers to state organs in decision-making and on the operation of the system of autonomy. These discretionary powers can be exercised to facilitate genuine autonomy for Tibetans in ways that would respond to the uniqueness of the Tibetan situation. Given good will on both sides, outstanding problems can be resolved within the constitutional principles on autonomy. In this way national unity and stability and harmonious relations between the Tibetan and other nationalities will be established

Here again, Article 370 goes so much further.
It is however true that in India, Article 370 has been the biggest impediment to integration of J & K State into the Indian Union.
Here again there is a basic difference between Tibet and Kashmir.
Tibet has for centuries managed its own affairs, Tibet was an independent State before 1950 with Representatives of India, Nepal, Bhutan and China seating in Lhasa.
Kashmir has always been part of the Indian subcontinent and Kashmiriyat remains an important aspect of Indian civilization.
It is not the case of Tibet, where the language, script, religion and culture had their own identity, entirely different from the Chinese.
The comrades should learn their history before making this type of parallel. But History tells us that the comrades have always been prisoner from own Marxist history.

Issue of rights violations in Tibet raised in LS
Press Trust of India
New Delhi
December 10, 2012
On the occasion of International Human Rights Day, BJP today raised in the Lok Sabha the issue of rights violations in Tibet, while CPI(M) alleged that similar problem exists in Jammu and Kashmir.
BJP leader Yashwant Sinha said the Chinese have been carrying out the "grossest" violations of human rights in Tibet over last 60 years because of which 81 Tibetans have committed suicide during this period.
66 Tibetans have committed self-immolation since January this year and "worse, the response of the Chinese is more repression", Sinha, former External Affairs Minister, said in Special Mentions during the Zero Hour.
He said Tibetans were troubled because of "excessive use of military force", religious restrictions, disappearances and detentions, removal of nomads and degradation of ecological system in the region under Chinese rule.
Sinha wanted the House to express "deepest heartfelt condolences" over Tibetans' plight and call upon the Chinese to "listen to the anguish" and "ensure people (in Tibet) get their rights".
"I call upon Parliament to speak up," he appealed.
Immediately after, CPI(M) leader Basudeb Acharia rose to allege "blatant" human rights violations in Jammu and Kashmir by security forces.
He alleged that youth were being picked up by security forces and their families were not informed.
"They are put in jail, they remain in jail for five-six years as undertrials. After that they are acquitted," Acharia said.
He referred to the demand for withdrawal of Armed Forces Special Powers Act (AFSPA) from Jammu and Kashmir and said the central government had not taken any decision even after recommendation from the state government.
Posted by Claude Arpi at 10:59 AM