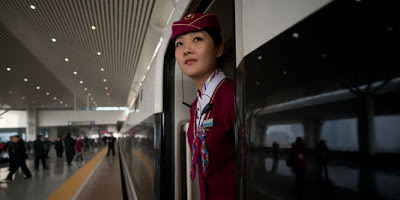 The Chinese media recently announced that China has successfully conducted a test run of the world's longest high-speed railway. The 2,298-km line will link Beijing to Guangzhou.
The new Chinese train will soon be running at an average speed of 300 km per hour; it will take just 2 ½ hours to cover the 693 km distance from Beijing to Zhengzhou, the southern economic hub.
It will ultimately connect Beijing with industrialized Guangdong province, at a speed of 350 km per hour, stopping in 35 major cities.
But this is not the most worrisome for India.
Another train will soon reach China’s border with India.
While the delegates of the CCP's 18th Congress were busy selecting their new leaders and the foreign media speculated on who will be the new Emperors of China, the infrastructure development on the Roof of the World continued at a quick pace; it now moves towards the Indian border. 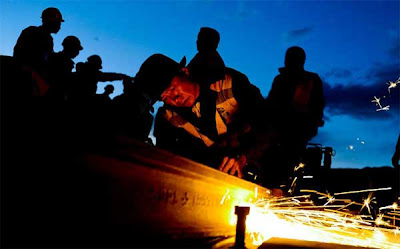 According to The China Daily, Jampa Phuntsok (alias Qiangba Puncog in Chinese transliteration), the Chairman of the Standing Committee of the Tibet People's Congress and Padma Thinley, the Chairman of the Tibetan Autonomous Region boasted about a new railway line which will soon reach Shigatse, the second largest city in Tibet. The same line will be later extended to Nyingchi, north of the McMahon Line.
Jampa Phuntsok announced that the extension of the world's highest-altitude rail link, the Qinghai-Tibet Railway, which reached Lhasa in July 2006, has been progressing well ‘despite some geological difficulties’.
The State-run CNTV believes that the lives of Tibetans have changed with the fast upgrading of the transportation infrastructure on the Roof of the World.
The TV channel takes the example of Tea Houses in Lhasa: “Whether in the morning, after lunch, or dinner, Tibetans drink tea all day long. Traditionally, it’s a mixture of boiled tea, yak butter, and salt, with milk and sugar occasionally mixed.” Beijing says that the train helped the Tibetans to get their supplies faster. Is it truly a great benefit?
Another advantage of the train would be the tourism boom.
But has the local population, once upon the time the most isolated of the world, really benefited? When Tibet was invaded by Communist China in October 1950, many foresaw that the plateau’s isolation would not last forever. 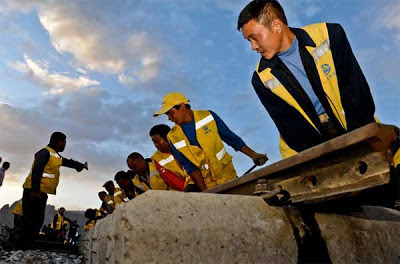 André Guibaut, a French explorer who had visited Tibet in the 1940’s wrote: “Armed with small wooden pegs and sighting equipment, men [surveyors] have penetrated into Tibet’s territory... The Tibetans do not realize that these pegs are a warning sign that a very ancient civilization, is condemned to disappear. Will the new roads be an improvement? The time is obviously near when it will be possible to come into Tibet by car or even by plane. Then Lama Civilization will dissolve into tourism.”
New explorers, mostly from the mainland China have come; ten million of them in the first 11 months of 2012. Tibet is fast becoming a museum.
Another article on China Tibet Online also mentions the Lhasa-Shigatse line now under construction. Considered as a key project for ‘China’s Western Development’, the construction started in 2010. Though only 253 kilometers long, the project is designed to carry more than 8 million tons every year; it will be completed in 2014. And when Beijing announces a date, the project is usually finished a few months in advance.
In view of the technical difficulties, the altitude and the climate, it is remarkable that the train will run at a speed of over 120 km per hour.
Further, the Chinese media also stated that the 435-km-long Nyingchi-Lhasa Railway was to be part of a proposed Sichuan-Tibet line, linking Chengdu in neighboring Sichuan province to Lhasa. The journey between the Tibetan capital and Nyingchi will thus be shortened by two hours from the current ten hours' drive.
For India, the problem is that Nyingchi is located just north of Arunachal Pradesh which saw a border war 50 years ago.
According to The Tibet Daily, it will take six years to complete the 1,900 km long Sichuan-Tibet Railway and an investment of 21 billion dollars will be required.
The Communist mouthpiece admits: “Construction work will be difficult, having to overcome frozen earth, landslides, rock slides, cold weather and lack of oxygen due to high altitude in some places.”
This new infrastructure can of course be used in times of peace for tourism and bringing more Han migrants on the Roof of the World, but also in case of a conflict with the neighbouring State (i.e. India)
But it is not India’s borders alone which are targeted by Beijing’s planners.
According to The Economic Times, Xinjiang will soon be linked to Kazakhstan through a rail line (292 km are laid in Xinjiang, while the remaining 293 km section is in Kazakhstan). Both lines will meet at the Korgas Pass in the restive Xinjiang Uyghur Autonomous Region.
The rail line will be able to handle 15.6 million tonnes of cargo a year and will cost nearly 1 billion dollars for the Chinese side alone.
Xinhua news agency said: “Industry observers expect the Korgas pass, which now connects China and Kazakhstan by a railway, a highway, and an oil pipeline, to handle 20 million tonnes by 2020 and 35 million tonnes by 2030.”
The total trade volume between China and Central Asia drastically increased during the last few years. According to official figures, the trade between Xinjiang and five Central Asian countries reached a historical high of 17 billion US dollars last year. 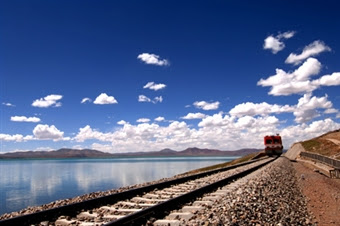 In the meantime, India remains busy with scams of all shades and magnitudes and ‘important’ cricket matches.
A CAG report, which has recently been tabled in the Parliament mentions the state of the railway line to Kashmir: “Already way behind schedule, the Udhampur-Srinagar-Baramulla-Rail Link, aimed at connecting the Kashmir Valley with the rest of the country with an all-weather route, is likely to run into further complexities and higher cost overruns”.
The CAG went into the history of the project and discovered that, scheduled to be completed in 2007 at an estimated cost of Rs. 3,077 crore, the project was now expected to be completed only in 2017-18 at a cost of Rs. 19,565 crore. Can you believe it?
The CAG report explained that poor planning resulted in time delay and cost overruns. In July 2012, just 12-14 % of the project was completed.
The Parliament was informed that “deficient planning affected land acquisition and finalisation of design and drawing; major changes in the scope of work as field investigations were taken up during construction; geo-technical investigations of the proposed alignment were not conducted before the commencement of work, but were done simultaneously, resulting in uncertainty in progress and that impacted finalisation of land acquisition and the design and drawing of bridges and tunnels.”
Worse, construction contracts were mostly awarded before ground investigations were concluded.
It is development with Indian characteristics: first, contracts are awarded, then feasibility studies begin. In the Kashmir railway case, the CAG found that even survey of the line had not been completed.
The CAG particularly points out to the Katra-Qazigund section which had to be abandoned and contracts terminated as a result of which a Rs. 1514.40-crore loss was incurred, inflicting a direct burden on Indian tax-payers.
Further the critical section between Katra and Banihal is likely to encounter complexities during execution and this could increase the cost manifold.
Where are the anti-corruption activists?
In China, corruption is as bad as in India, but projects are completed on time. One can, of course, discuss the benefitd for the local populations, but it would certainly make a difference for India’s defense preparedness.
Posted by Claude Arpi at 7:23 AM