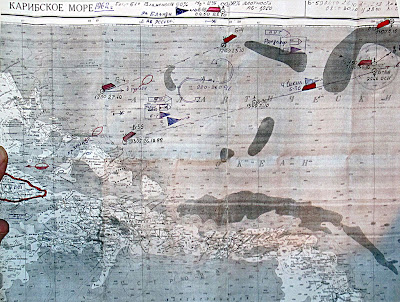 While the 1962 Sino-Indian War has received an extensive coverage in India, the Cuban Missile Crisis between the United States and Soviet Union has widely been discussed in the media worldwide.
Both events occurred at the same time.
One difference of course is the fact that outside the subcontinent, very few cared for what happened fifty years ago on the Himalayan slopes.
For example, I have not seen a single article in the French press about 1962 War.
Another difference is the number of new documents which have been declassified by the US, the Russians and other protagonists of the Cuban Crisis.
In India and China, the archives have remained as hermetically closed as ever; it is not a sign of maturity.
It has not been the case in the US and Russia. I post below an example of declassified documents published by the National Security Archives in the United States about the role of the submarines in the Cuban 'underwater' war.
Many more such examples could be given
One of them is the Cold War International History Project (CWIHP) of the Woodrow Wilson International Center for Scholars in Washington, D.C. which released its CWIHP Bulletin (Issue 17/18) on “The Global Cuban Missile Crisis at 50.”


...this issue continues the Project’s mission to enrich scholarship and public policy debate through new archival evidence from inaccessible (or less easily accessible) archives around the world. Containing over 500 newly declassified and translated documents from international sources, this issue is the most extensive collection ever presented of original, never-before published, non-US primary sources on the Crisis.

One can continue dreaming that one day India and China will open their archives.

The Underwater Cuban Missile Crisis: Soviet Submarines and the Risk of Nuclear War
National Security Archive Electronic Briefing Book No. 399
Edited by Thomas Blanton, William Burr and Svetlana Savranskaya
October 24, 2012
Washington, DC, October 24, 2012 – Extreme temperatures, equipment breakdowns, and the reckless deployment of nuclear torpedoes aboard Soviet submarines near the quarantine line during the Cuban Missile Crisis 50 years ago this week elevated the already-high danger factor in the Crisis, according to Soviet and American documents and testimonies included in a new Web posting by the National Security Archive (www.nsarchive.org).
The underwater Cuban Missile Crisis received new attention this week with two PBS Television shows, one of which re-enacts as "overheated" docudrama (in the words of The New York Times reviewer) the confrontation between U.S. Navy sub-chasing units and the Soviet submarine B-59, commanded by Valentin Savitsky, on the most dangerous day of the Crisis, October 27, 1962.
The newly published documents in the posting include the original Soviet Navy map of the Caribbean showing the locations of the four "Foxtrot" diesel submarines that had deployed from the Kola peninsula northwest of Murmansk on October 1, 1962, bound for Mariel port in Cuba to establish a submarine base there. Unknown to the U.S. Navy, each of the subs carried a nuclear-tipped torpedo, with oral instructions to the captains to use them if attacked by the Americans and hulled either above or below the waterline.
The documents include the never-before-published after-action report prepared by Soviet Northern Fleet Headquarters after the four commanders' return to Murmansk in November 1962, describing the atrocious conditions aboard the subs, which were not designed for operations in tropical waters.
The posting also includes the U.S. Navy message on October 24, 1962, detailing the "Submarine Surfacing and Identification Procedures" to be followed by U.S. forces enforcing the quarantine of Cuba, including dropping "four or five harmless explosive sound signals" after which "Submerged submarines, on hearing this signal, should surface on Easterly course." The State Department communicated this procedure to "other Governments" including the Soviet Foreign Ministry, but the Soviet submarine commanders, in a series of interviews in recent years, report they never received the message.
A fascinating sub-plot of the underwater missile crisis involves U.S. efforts to locate the Soviet submarines. Since 27 September 1962, the U.S. Navy had been tracking the subs using listening posts that detected electronically-compressed "burst radio transmissions" between Soviet Navy command posts and the submarines themselves. The messages could not be deciphered but the location from where they were transmitted could be identified. While U.S. Navy analysts had assumed that the subs were on their way to the Barents Sea for exercises they discovered that they were in the North Atlantic on their way to Cuba. [1] Another high-tech method for tracking subs was the Sound Surveillance System (SOSUS) that detected the noise made by submarine engines. [2] The Navy also used "mad contacts", referring to magnetic anomaly detection (MAD), and "Julie" and "Jezebel" sonobouys. [3]
The Archive's publication also makes available:
Anatoly Petrovich Andreyev, excerpts of diary entries, October 1962.
Photographic images of the evocative diary of submariner Anatoly Petrovich Andreyev, who wrote his account as a letter to his wife describing the equipment breakdowns, the elevated temperatures, the lack of ventilation or fresh water, skin rashes, 30-40% weight loss, and a crew stripped down to their skivvies to deal with the heat.
Video of Soviet signals intelligence officer Vadim Orlov from the historic 2002 40th anniversary conference on the Missile Crisis, in Havana, Cuba. Orlov served on the B-59 submarine and witnessed how close the sub's commander came to arming the nuclear torpedo aboard.
Video of Capt. John Peterson (USN retired) at the 2002 Havana conference, describing the hunt for Orlov's submarine, acknowledging that the "signaling depth charges" he and his crew dropped on the Soviets might have sounded very different to the Soviet sailors down below Peterson's destroyer.
Finally, today's posting includes the Navy cables, deck logs, Flag Plot charts, and photographs from the October 27 tracking and surfacing of B-59, excerpted from the Archive's previous publication which established the precise date and time of the confrontation with submarine B-59
Posted by Claude Arpi at 7:00 AM