'I was, I am, and will remain anti-Chinese' 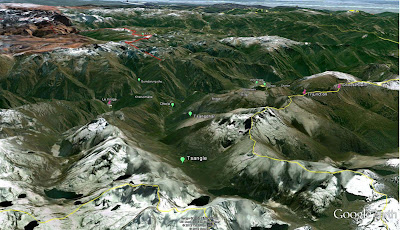 'I know by experience that they can put a dagger in our back at any time...'
'It was a state of total chaos. Nobody knew what was happening. The fog of war was so thick that nobody could see anything... It is an experience which marked everybody's life.'
Brigadier Amarjit Singh Behl (retd), then a second lieutenant, and his men fought to the end before being taken prisoners of war by the Chinese in the 1962 Indo-China war.
Then a 21 year old, the soldier looks back at a war fought in extremely difficult circumstances and life as a Chinese PoW in this interview to Rediff.com's Claude Arpi.

Did they capture a lot of arms and ammunitions?

They must have; also trucks and other equipment from south of Tawang till the Assam border. As far as the 7 Brigade is concerned, it was totally and entirely an on-foot battle. A battle of the fit men only!
From Tawang to Bridge III, it was between 5 and 7 days walk. You had to be strong and I was strong, I was only 21 years old.
With my boys, I walked from Ziminthang to Tsangdhar in 16 hours only.
On October 21, we were kept near the helipad and I saw the two officers who had been killed near their chopper. I went to the Chinese officers who had interpreters in English and Hindi (while in the Chinese prisoner of war camp, they also would speak Gorkhali and Punjabi).
I asked this officer, I want to bury these officers; after I insisted, he said 'Alright'. With two of my boys, we dug a 2-feet trench and buried Major Ram Singh and Squadron Leader Sehgal. We saluted them.
The next night (October 21-22) we stayed on there.
On the 22nd morning, we walked till Bridge III on the Namkha chu where we stayed for the night. Then we went to Khenzimane (the Indo-Tibet border) and the next day, we reached Le village on Nyamjiang chu in Tibet.
We stayed for two days in Le and moved to Marmang where we spent two nights before being taken in trucks to the PoW's camp near Tsetang in central Tibet.