Mao will not lead China forever 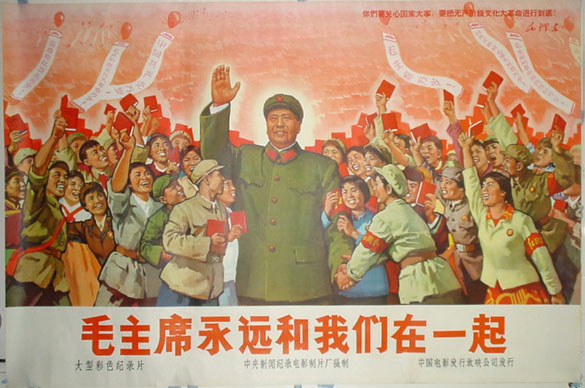 Mao is for ever with us, says the poster.
Perhaps not.
"To include Mao, or not to include Mao? That is the tough question China's rulers are facing as the nation prepares for the once-a-decade leadership transition", writes Cary Huang in The South China Morning Post.
One can understand that Xi Jinping, the expected new leader of China does not believe in the cult of Mao.
As I mentioned in another posting, Xi Jinping was nine years-old when he saw his father, Xi Zhongxun, then Vice-Premier of the People's Republic of China,  unjustly purged by Mao.
This happened in September 1962 as Mao was preparing to go to war with India. Xi Zhongxun only reappeared in 1978, when Deng Xiaoping gave him the task to start economic reforms in China's coastal areas.
What a traumatic experience, it must have been for young Xi!
Here is an extract of The Origins of the Cultural Revolution (Volume 2) written by the great scholar Roderick MacFarquhar:

The day of the jackal
The Gao Gang affair [Gao was the victim of the first major purge within the CCP in 1953-54] was still alive issue in 1962. As we have seen, by the time of the Seven Thousand Cadres Conference [January 1962] , it was Peng Dehuai's alleged involvement in it that had to be used as the major justification for Mao's refusal to rehabilitate the marshal, since his trenchant criticisms of the GLF [Great Leap Forward] had been proved correct.
Thus it was no wonder that Kang Sheng should prick up his ears at the mention of a new Gao Gang angle. In the tense atmosphere of intra-party struggle revived at Beidaihe by Mao, here was a heaven-sent opportunity for Kang to prove again to the Chairman his indispensability in ferreting out traitors.
Among Kang's current positions was vice-head of the CC's Culture and Education Small Group and head of its theory section, and on that authority he ordered the Propaganda Department to stop any further publication of chapters from Liu Zhidan, even though at this point he had not even seen the manuscript. He ordered 300 copies of the third draft and 600 copies of the fifth draft to be printed and distributed for examination by the Beidaihe conferees.
On 24 August, he wrote to the CC's General Office to say that this was not simply a literary issue but had political implications. He coined the phrase 'using novels to promote anti-party activities' is a great invention, which Mao embraced with enthusiasm, and which indeed was subsequently attributed to the Chairman. But author Li Jiantong was small fry, and so Kang Sheng concocted the idea of a high-level plot masterminded by Xi Zhongxun.
Why did Mao seize on the Liu Zhidan affair and give Kang Sheng his head without really looking into the matter, or indeed believing the charges?
Did he not have enough to do discouraging his leagues from pursuing revisionist policies in the countryside and abroad?
One reason was probably that he welcomed a fresh case seemingly tailor-made to justify his warnings on the need for class struggle and eternal vigilance.
Secondly, ever since the Hungarian revolt and the Hundred Flowers in China, he had been extremely wary of the ability of intellectuals to use their professional skill for nefarious political purposes, what might be called the Petofi Circle syndrome.
Kang's new concept resonated with him, and as the 1960s progressed, Mao would increase the pressure on the intellectuals. Finally, as Kang Sheng doubtless intuited, attacking Liu Zhidan was an excellent way to demonstrate the continuing relevance of the Gao Gang affair, and thus provide additional justification for the refusal to rehabilitate Peng Dehuai.
For his own reasons, Liu Shaoqi had to fall in with this strategy vis-à-vis Peng Dehuai, but at the 10th plenum he also condemned Xi Zhongxun and Liu Zhidan in the same terms. There is no record of Zhou Enlai attempting to save a man he evidently regarded as a key member of his State Council team; with Mao's permission and  Chen Yi in attendance, the premier tried only to comfort Xi Zhongxun with an assurance that if the Liu Zhidan accusation was a mistake, it would be corrected.
At the 10th-plenum, Kang Sheng was thus free to lead the attack on Xi, and thereafter to lead the second special case review commission in its investigation of the supposed 'anti-party group' led by Xi; Jia Tuofu, a one-time associate of Liu Zhidan and currently a CC member and a vice-chairman of the State Planning Commission; and the author's husband, Liu Zhidan's brother, Liu Jingfan. Kang Sheng alleged that a character in the novel named Luo Yan represented Gao Gang, just as three years later he would claim that Hai Rui was Peng Dehuai. Officials at the publishing house and throughout the northwest were investigated, and the case had still not been concluded when the Cultural Revolution broke out and it became public knowledge. Kang Sheng's reward was promotion to the CC's secretariat at the 10th plenum.

Thus Xi Zhongxun was purged, for no fault of his.

Will Mao Zedong's philosophy live on in party constitution?
South China Morning Post
LEADERSHIP TRANSITION
Cary Huang in Beijing
Analysts are divided on whether omission of Mao Zedong's name in recent statement means his philosophy may be cut from constitution
To include Mao, or not to include Mao? That is the tough question China's rulers are facing as the nation prepares for the once-a-decade leadership transition in two weeks.
The omission of Mao Zedong's name from a recent Xinhua statement has triggered speculation as to whether the Communist Party's 18th congress, which begins on November 8, will make a historic decision about how much emphasis to accord one of the party's founding fathers, as the practical impact of Mao's legacy on the party wanes.
The statement, issued after the party's 24-member Politburo met on Monday, made references to President Hu Jintao , his predecessor Jiang Zemin , and Deng Xiaoping , the architect of China's transformational "reform and opening up" policy, but did not mention Mao. The statement also said the congress would revise the party constitution to incorporate "significant" theories.
Analysts are divided on whether the omission was an indication that the party leadership had reached a consensus on Mao's controversial theories.
"This is not a new development. The omission has happened before in the past decade," said Professor Steve Tsang, who teaches contemporary Chinese studies at the University of Nottingham, where he is also director of the China Policy Institute.
Tsang said the practice of citing the "contributions" made by successive generations of top leaders had become too long and unwieldy to include the full citation from Karl Marx to Hu.
"Do not read too much into the omission," said Professor Liu Kang, director of Duke University's China Research Centre.
Liu said the party was uncertain about its ideological legitimacy but still tended to preserve its ideological continuity. "The party is unlikely to deliberately trigger a political controversy and jettison a figure on whose memory it depends for legitimacy and continuity," he said.
The party announced yesterday the planned naming of four halls in the Mausoleum of Mao Zedong in Tiananmen Square after revolutionary places related to Mao.
The places are Jinggangshan and Yanan , which were Red Army headquarters; Shaoshan , Mao's birthplace; and Zunyi , where Mao was appointed top leader of the Red Army.
Some analysts agree that the omission of Mao's name from the recent statement may hint at a pivotal change in the party's outlook, even as time is running out for the government to fix structural flaws in the way the country is run.
Zhang Ming , a political scientist at Renmin University, said it had become imperative, and therefore likely, that the party would reach a decision on whether to acknowledge Mao's ideology, particularly after the Bo Xilai saga this year.
Bo, a high-flying Politburo member until his recent downfall, had gained considerable popularity through his Maoist revival campaign.
"The party as a whole is extremely averse to the idea of another Mao appearing, and they understand that China's future depends on overcoming its attachment to Mao," Zhang said.
Posted by Claude Arpi at 6:49 AM