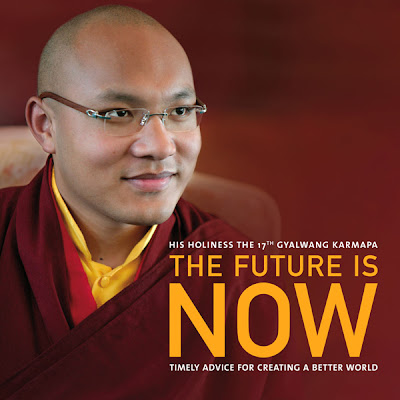 As Sudip Mazumdar quoted me in this article on Karmapa, I would like to add that the responsibility for feeding rubbish to a very gullible media is not only with 'lower level police officials and unidentified source', but also with higher level police officers of the HP government and the Chief Minister himself.
These officers may have please some local lobbies, but ultimately it has deeply upset the people of Himachal and other Buddhist regions of the Himalayas.
Another news item said: "Prime Minister Manmohan Singh has assured a Buddhist delegation that he will personally look into the case."
According to a press release issued by the Joint Action Committee of Buddhist Organisations of Sikkim: "The PM assured a Buddhist delegation, which met him yesterday to discuss the issue, that he would personally look into the matter and review the entire case as soon as the Budget session is over."
It is high time that the Karmapa's name is cleared from accusations of spying. As Sudip Mazumdar explains: "[The Karmapa] is under surveillance round the clock. Intelligence officials listen in on all his meetings. Those agents must be too dumb or utterly incompetent not to notice money being put in the donation boxes."
It would be the first case in the history of intelligence of someone who, being under day and night watch for 11 years, could continue to 'spy' without the intelligence agencies being able level any specific charges against this person.

The Karmapa case: Lies, plants and damage control
Sudip Mazumdar  | 2011-02-27
IANS
Now that Ogyen Trinley Dorje, better known as the 17th Karmapa, has been cleared of money-laundering charges by the Indian government, it is in order to take a look at the inept handling of a matter of great national importance and religious sensitivity.
But first a recap: A random police check on a car carrying Indian rupees worth a little over
$200,000 on Jan 26 led to a series of raids on the 25-year-old Karmapa's shelter in exile. His modest living quarters in the Gyuto Tantric monastery in the sleepy village of Sidhbari in Himachal Pradesh yielded cash worth over $1 million in some 20 foreign currencies, including about 10 per cent of the total amount in Chinese yuan.
Lower level police officials and unidentified sources quickly fed gullible reporters with charges ranging from the Karmapa being a Chinese 'mole' sent to India to spread Chinese influence in Himalayan border states to money-laundering to shady land deals. Few bothered to check with the Karmapa's aides before repeating the serious charges. Some media outlets aired blatant lies such as Chinese SIM cards having been found in his monastery and that he had visited Hong Kong and met Chinese officials there.
Recovery of Chinese yuan was proffered as evidence of his being a Chinese mole. But there were 20 other foreign currencies including Malayasian ringgit to Singapore dollar. If Chinese yuan makes him a Chinese spy then he could jolly well be a Malaysian mole or Singaporean agent. The police recovery lists never mentioned Chinese SIM cards.
It was also found that the Karmapa's office didn't hold foreign currency secretly and had twice sought the government's permission to receive unsolicited donations from a large number of devotees, including an increasing number from China. But an unsure government, prompted by a suspicious section of the officialdom, was still sitting over the application.
'The Karmapa's trust had also sought and received preliminary permission from the town and country planning department of the state government to buy land in the state,' says the Karmapa's lawyer, Naresh Mathur. 'There was nothing hush-hush or shady in all this.'
Amidst all these allegations, the tall, handsome and intelligent Karmapa remained unruffled even as messages of support poured in from Tibetan exiles and Buddhists from across the world. The Dalai Lama himself threw his weight behind the Karmapa saying that the young popular lama has many visitors from China who offer him donations in Chinese yuan.
Since his daring escape and arrival in India in 2000, the Karmapa has been a source of suspicion for a section of India's security establishment which had put severe restrictions on his movements. He was allowed only one trip to the US in 2008. He is under surveillance round the clock. Intelligence officials listen in on all his meetings. Those agents must be too dumb or utterly incompetent not to notice money being put in the donation boxes.
Beijing's leadership must be gleeful in seeing a possible rallying force for the Tibetan cause facing such ignominy in his host country. 'It is clear that China is the first to benefit from the present messy situation in Dharamsala,' says Claude Arpi, an author and expert on Tibetan affairs.
'The last thing Beijing wants is to see the Dalai Lama designate a 'spiritual' successor before he leaves this world. Beijing has been planning for decades for the Dalai Lama's succession'.
Any disarray and confusion among Tibetans obviously helps the Chinese leadership's plans to keep the restive region under control. 'China gains from this episode without having to lift a finger,' says Dibyesh Anand, who teaches in London's Westminster University and has authored a book on Tibet.
'The Karmapa cannot become a unifying religious figure for the Tibetans and their supporters after the Dalai Lama passes away, because in order to do that, he needs to remain in India, have trust of the government and the people, and be allowed to travel without too many restrictions. China gains from this. '
Add to this India's own chaotic and opportunistic party politics. The BJP-ruled Himachal Pradesh government planted stories in the media with little respect for the sentiments of Indian Buddhists. Peace-loving and intensely loyal Himalayan Buddhists felt let down by the vicious attacks. Similar attacks on Muslim or Hindu religious figures would have invited violent protests. Instead of throwing stones, they held prayer meetings in Delhi's Jantar Mantar. Much of the Indian media of course ignored those peace vigils.
'Indians in the Himalayan region are not treacherous beings and to see them as willing allies in an effort to destabilize India is simply preposterous,' says Thinlay Topgay, a lawyer from Sikkim who now works in New Delhi. 'The Karmapa is not running the local office of the Chinese security establishment.' By allowing wild rumours to gain currency, India's paranoid security establishment has scored an ignominious self-goal, much to the amusement of its Chinese rivals.
India has never really appreciated both the diplomatic and strategic advantage and the goodwill that it has derived from sheltering the Dalai Lama and the Tibetan refugees. It is time India handled them, including the Karmapa, with care.
Posted by Claude Arpi at 6:34 AM

What everyone seems to miss is thefact that the Karmapa lineage is non-political and has been for 900 years; and the Karmapa himself has no interest in taking on the leadership after the Dalai Lama retires. HH Karmapa's views on this matter have been clearly stated in The Guardian, December 1 'The Karmapa is Caught in a Political Game.'

It might actually be the other way around to be honest. Maybe the chinese yuans have reached the state, not in the Karmapa's pockets, but in the pockets of the local dignitaries. That coupled with local politics could have led to this bizzare accusations which even a fool will know have no legs to stand in court. It is a publicity stunt which dangerously encourages local resentment and possible riots much like what had happened in the past in the area. The Indian Govt. must seriously look into the poor handling of the case, especially from the top local officials and the police department and bring proper law and order in its place. Simply letting corrupt officials to get away will lead to future unrest as there would be no consequences to their anti-country actions.

One such lie from a high level source: The DGP of Himachal had alleged that the Karmapa monastery was illegal; that he owns huge properties worth millions that were sitting on benami property. If he & all the Indian reporters had done the basic investigations it would have been revealed that the Gyuto monastery is neither owned nor built by karma kagyu. The 17th HK occupies a small apartment in that monastery complex.