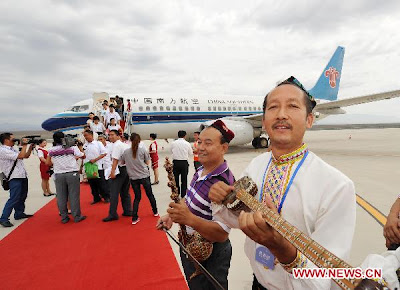 An old Report China’s Railway to Lhasa, Tibet: Crossing the Line prepared by the International Campaign for Tibet, Washington, DC had mentioned:
"Today, the Uyghurs, Kazakhs, and other indigenous peoples may still constitute a majority block [in Xinjiang], but they are outnumbered by the Chinese in many urban areas like Urumqi, creating widespread ethnic tension and economic disparity. Meanwhile trains continue to bring in migrants to the region, stopping at major points like Turfan, Korla, and Aksu. In 2000, tracks reached the city of Kashgar near the Kazakhstan border. Few Chinese lived there until the 1990s, but today signs of a growing presence are evident. By one account, the Chinese population jumped by 30 percent in 2001, compared with a 2.5 percent increase a year before the railway began its operation. Migration and redevelopment of traditional neighborhoods have, according to a Uyghur living in the west, made Kashgar virtually unrecognizable."
This was written a decade ago when Beijing decided to consolidate its 'border areas'. I then wrote: "We should always keep in mind the dual purpose of the rail in the history of Communist China: one is the colonization (what Beijing calls the ‘integration of the different nationalities’) and the second one is the ‘strengthening' of the borders.
Since the early fifties, Beijing was able, first with the road network (primarily in Tibet), then through the rail (in Xinjiang) to establish military garrisons which helped to stabilize the ‘liberation’ and control their remote and often rebellious provinces. The opening of these new communication links provided the necessary infrastructure to have an administrative control."
Now, the Central leadership is going a step further by opening airports on a very large scale in Xinjiang and Tibet.
The future is ominous for these 'minorities' areas.


China to spend $4.6 bln on airports in restless Xinjiang
Jan 30 2011
Reuters
Beijing
The Chinese government will spend around 30 billion yuan over the next five years on new airport projects in the restless far western region of Xinjiang, state media reported on Monday.
The government will build four new airports and expand or relocate six others, so that by 2015 Xinjiang will have 22 airports handling civil flights, the official Xinhua news agency said.
The number of passengers using Xinjiang's airports are expected to almost double by 2015 compared with 2010, to around 20 million people, it added.
Energy-rich Xinjiang is strategically located at the crossroads of Central Asia, and Beijing has shown its determination to keep a tight grip on the region, which has been wracked by ethnic unrest in recent years.
The government has invested billions in developing Xinjiang, which has been accompanied by an influx of majority Han Chinese. Many Uighurs, a Muslim Turkic people native to Xinjiang, resent the growing Han presence in the region.
China has likewise spent generously on transport infrastructure in another sensitive part of the country, Tibet, opening a fourth civil airport there last year.
Beijing says that the new airports, roads and a railway to Tibet will promote development and help raise living standards. Tibet activists say it will speed up the pace of Chinese migration there and dilute Tibetan Buddhist culture.
Air travel is developing rapidly in China on the back of a booming economy.
China has big plans for its airport network, especially in poorer and more remote regions in the far west. But many of these stylish new airports have struggled to attract customers and languish with just a few flights a week, or none at all. (Reporting by Ben Blanchard; Editing by Jacqueline Wong)
Posted by Claude Arpi at 7:18 AM