Almost every tourist property is owned by non-Himachalis 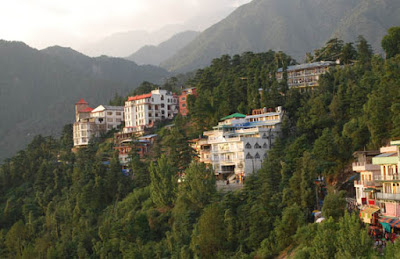 "It would not be an exaggeration to claim that today almost every tourist property in the state is owned by a non-Himachali, and the government is silent about it." says this article in the HimVani.

The author raises some important questions behind the Karmapa issue, particularly the land problem.
Has the vociferous DGP, frivolously accusing Karmapa of all sorts of crimes, inquired into the 'tourist' properties in McLeod Ganj or Kangra in general? Do they all belong to Himachalis? Have they been legally purchased?
It does not absolve the Karmapa to be inquired into. But there should be no double standards.
Prof Samdhong Rinpoche, the Tibetan Prime Minister yesterday told  the Times of India: "if huge haul of foreign currency including Chinese Yuan had been accumulated illegally must be investigated thoroughly to extract the truth about it." He added that "the Karmapa staff had been responsible for the money found to be kept at monastery in illegal manner. Regarding suspicions being raised about Karmapa being Chinese agent or spy, he said that he (Karmapa) was not so smart and competent to indulge in such sort of activity."
For the land issue, Mr Dhumal has to decide what he wants to do, but he can't apply the stick for Tibetans, if doesn't do it also for Punjabis and others who 'own' properties in Dharamsala and else in the State.
Politicians usually understand that 'business is business' (Dhumal knows that it is not in the interest of the State, if the Dalai Lama and the Tibetan refugees leave Himachal), therefore an anachronistic situation should perhaps be regularized.
As for the Karmapa, being surrounded for the past 11 years by police and intelligence officers, if he still manages to spy for China, only means that he is really clever... or the intelligencewallas totally stupid.
In my opinion, his biggest failure is probably not to have been able to make friends with Himachalis.
Let us hope that this will change soon.

Would we ever blame ourselves for the Tibetan crisis!
Himvani
February 14, 2011
By Satyakam Bharti
So the Himachal Pradesh government continues with its flip-flop on the Karmapa issue with the state chief secretary making a formal announcement declaring that the “state government trusts him fully” a day earlier, and then the Chief Minister himself contradicting her by saying that “there is no question of giving clean chit to anybody”. A couple of days earlier the state police had made every effort to vilify the religious leader and the state political big-wigs had fought a most unlikely war of words over the issue. While the whole debate over Himachali interests being compromised through benami land deals by Tibetans was waiting far an appropriate trigger, which happened to be recovery of unaccounted cash from Karmapa’s staff, the way the political establishment and the administrative machinery have conducted themselves over the last fortnight only reflects our own naiveté.
On the other hand, silence of the Union government reflects India’s perplexity in dealing with Ogyen Trinlay Dorje, the person, and therefore the status quo maintained over the last one decade is expected to continue. Or has the central government something up its sleeves? As of now, the way various wings of government have reacted to the development, there appears total lack of any definite policy on Tibetan refugees in general. If it was not so, them how come the government took 10 years to take action against the Karmapa on his alleged China links despite the fact that he has been living under near house arrest. And anyway, 10-years was a long enough time for India to decide what to do with him and maybe also to win him over, if we ever doubted his intentions.
The larger question, however, is of the common Tibetan refugees, who have been living with us for over five decades now. Let’s admit that there has always been an uncomfortable relationship between Himachalis and Tibetans and they live in two separate worlds, the reasons for which are several – from economy to culture and politics. The recent developments will take them further away, and our politicians have been contributing to that. Sadly, over these years hardly have we ever thought about their refugee status and life in exile. Surely, there are several Indo-Tibetan friendship forums, but their reach is limited to seminar rooms and there is no people-to-people contact.
So while, as any other refugee community, they have created an economy of their own, for locals it’s still a riddle how they manage their finances. While overtly it may appear that the Tibetans are comparatively well off, but that may not be the complete reality. In any case, Tibetans still need our land for shelter and to do business but we never understood this need of theirs, or rather decided not to bother ourselves with the thought.
From 8,000 in the 60s to nearly 2 lakh now (that’s the official figures though the actual numbers may be in the multiples), the Tibetan community today is spread across India, but they can’t buy property. So were they expected to live in hotel rooms throughout their life? Those who settled in Karnataka and were allowed forest land are today successful farmers. Why could the same not happen in Himachal? Because land in the mountains comes at a premium, and it’s more profitable to raise a hotel building than to till fields. The local administration had no problems with this arrangement because influential property dealers were earning in millions by buying cheap land from gullible local villagers and selling it to cash-rich Tibetan institutions and individuals. And anyway, the Tibetans just used the loopholes in our system to get benami land transactions done that other non-Himachalis too have been exploiting without being questioned.
It would not be an exaggeration to claim that today almost every tourist property in the state is owned by a non-Himachali, and the government is silent about it. Why, because it suits the political and bureaucratic establishment and also the local land mafia. The state government needs to answer why a request from the office of the Dalai Lama to consider the issue of Tibetans’ property rights has not been decided yet. The situation cannot continue for ever as the third generation of Tibetans has already started applying for Indian citizenship, to which they are now legally entitled. What if it happens fast enough and in large numbers and also that they continue building huge monasteries across Himachal. Would we still call it cultural invasion and an attack to alter our demography? This scenario is unlikely to arise as the Tibetans are as desperate to preserve their identity, as are we about not letting them usurp our resources. So let’s not be hypocritical but realistic and try to understand ground realities so that the two communities may co-exist without any ill-feelings, and considering our cultural, historical and political interests that should not be much of an effort, but only if our rulers show some signs of maturity.
Posted by Claude Arpi at 6:17 AM