Holidays with friends and dictators 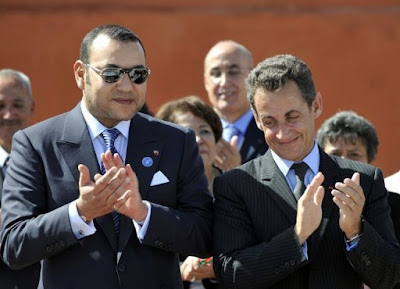 French politicians love holidaying with friends.
The issue is not that French (and probably other) politicians spend 'free' holidays with 'friends', but that a Minister of Foreign Affairs of France could go holidaying when a popular revolution had begun and use the plane of a 'friend' of the hatred leader to move around.
French politicians from Left to the Right have been traditionally spending some relaxation time with France's good friends around the Mediterranean Sea: Chirac in Morocco (at the Gazelle d'Or Palace in Taroudant, invited by the King), Sarkozy and Madame Bruni (at the Jnane Lekbir Royal Residence near Marrakesh, also invited by the King) or Francois Mitterrand (at the Old Cataract Hotel in Aswan, courtesy Hosni Mubarak). Ditto for senior ministers.
Their hosts are (were) French best friends. They are the ones who bring security and peace around the Mediterranean Sea. Unfortunately for the French political leaders, the vox populi have turned some of them into 'dictators'.
Worse than the 'free' invitation, Mrs Alliot-Marie's should have had the proper information about what was happening in the country. What is the point to have an embassy and intelligence agencies, if they do not warn you that something is brewing in the region.
The role of a Minister of Foreign Affairs is to grasp what is going on in a given place and see how promote the interests of his/her country in this area. It does not help to promote French interests to use the plane of a 'friend' of the dictator.
The Alliot-Martie (as well and the Fillion) incidents demonstrate that the Ministers of the Republic are totally unable to grasp the political situation of the world today. It is a serious issue. In my opinion, more serious than the 'paid holidays'.
The new Code of Conduct announced by President Sarkozy is welcomed, but will it make the Ministers 'intelligent'. Opposition leaders Daniel Cohn-Bendit said that the main problem was the 'extremely foolish attitude' of Mrs Alliot-Marie (attitude extrèmement bête), this is the real question. Will the politicians feel the pulse of the world better after the Conflict of Interest Bill is passed. Not sure!
Watch this video, you will see that France has also a great tradition of hospitality for its 'friends'. Of course, it is still difficult to differentiate between 'friends' and 'dictators'. For this particular one, we will have to wait more time for the vox populi to give its verdict.


Sarkozy tells cabinet to holiday in France
By Roland Lloyd Parry (AFP) – 2 hours ago
PARIS — French President Nicolas Sarkozy on Wednesday ordered his ministers to stay in France on holiday to avoid diplomatic gaffes after scandals over hospitality from authoritarian North African leaders.
Sarkozy bowed to criticism from rivals after embarrassing revelations that his prime minister and foreign minister accepted free holiday flights in Egypt and Tunisia, shortly before popular uprisings in both countries.
"From now on, members of the government must prefer France for their holidays," President Nicolas Sarkozy told a cabinet meeting, according to a transcript released by his office.
"Invitations accepted abroad will be authorised by the prime minister and the presidential diplomatic unit... to see whether they are compatible with France's foreign policy."
Prime Minister Francois Fillon on Tuesday admitted that he had a New Year family holiday on the Nile paid for by Egyptian President Hosni Mubarak.
Foreign Minister Michele Alliot-Marie had faced calls to resign after she admitted using a private plane owned by a Tunisian businessman who was alleged to have ties to the regime of the country's ousted dictator.
"What was common a few years ago can shock nowadays. So it must be strictly monitored," Sarkozy said. "Only by being above reproach will people holding high office strengthen their citizens' trust in the state institutions".
Some government allies had rejected the uproar as political attacks by their opponents, but Tuesday's revelation by Fillon raised broader laments from opponents over government ethics.
"The crumbling of the public spirit has reached the very top of the state," said Jean-Marc Ayrault, the Socialist parliamentary leader who had led calls for Alliot-Marie to resign.
"The government must immediately launch a bill on conflicts of interest that will apply to everyone."
"The Sarkozy system has erased the line between power and money," said Jean-Louis Roumegas, spokesman for the minority green party Europe-Ecologie-Les Verts, in a statement before Sarkozy's announcement.
"Now a minister sees nothing abnormal in using an oligarch's plane or having his holidays paid for by a dictator. That's the most serious thing."
Egypt is a key regional ally for France as well as for the United States. North Africa is a popular winter destination for France's political elite.
Sarkozy and his pop singer wife Carla Bruni spent their end-of year holiday in Morocco at the Jnane Lekbir royal residence belonging to King Mohammed VI.
Fillon said in a statement that he and his family got a free holiday from December 26 to January 2 in the Nile resort of Aswan, and were treated to a Nile boat ride and a flight on an Egyptian government plane to go sight-seeing.
Alliot-Marie admitted that in December she took two trips in Tunisia in a plane owned by a prominent businessman when the revolt that eventually deposed dictator Zine El Abidine Ben Ali was already under way in the former French colony.
Alliot-Marie denied that the businessman was close to Ben Ali's regime. She said she regretted her actions but refused to step down despite repeated calls from the opposition Socialists.
The outcry over Alliot-Marie came at a delicate time, after France was accused of being slow to react to the Tunisian uprising and of indulging Ben Ali's authoritarian regime.
France had warm ties with Ben Ali during his 23 years in power but just after he was driven out, Sarkozy backed the protest movement and denied him refuge in France.
Last week Sarkozy also added his voice to calls for immediate political transition in Egypt as pressure grew on Mubarak to step down amid mass protests.
Copyright © 2011 AFP.
Posted by Claude Arpi at 7:25 AM

Email ThisBlogThis!Share to TwitterShare to FacebookShare to Pinterest
Labels: France