A Train for Nil Trade

In the early 1950's, Yatung (Yadong for the Chinese) was still a busy Indian Trade Mart.
Through the Panchsheel Agreement, some Trade Agencies were 'officially' established:
"(1) The Government of India agrees that the Government of China may establish Trade Agencies at New Delhi, Calcutta and Kalimpong.
(2) The Government of China agrees that the Government of India may establish Trade Agencies at Yatung, Gyantse and Gartok."
It was further agreed: "The Trade Agencies of both Parties shall be accorded the same status and same treatment. The Trade Agents of both Parties shall enjoy freedom from arrest while exercising these functions, and shall enjoy in respect of themselves, their wives and children who are dependent on them for livelihood freedom from search.
The Trade Agencies of both Parties shall enjoy the privileges and immunities for couriers, mail-bags and communications in code."
Unfortunately, it did not last long. A Note given by the Government of India to the Chinese Counsellor in India on 8 July 1959 states: "Apart from the Embassy, the Chinese Government have consulates General in Bombay and Calcutta and, by virtue of the 1954 Agreement, a Trade Agency in Kalimpong. All these Chinese posts in India enjoy full facilities for hiring of suitable accommodation for the offices and their residential staff. Chinese officers and members of the staff have freedom of movement without even intimation to the Government of India. They are allowed, after registration, to keep personal arms with them. They enjoy freedom of meeting whom they wish, freedom to distribute official bulletins, move in official transport and function without restrictions in India. Further full facilities are allowed for couriers to carry official mail from and to Chinese Mission and Posts in India.
2.Similarly Chinese nationals, other than officials, are permitted freedom of movement, facilities to take up employment, own property, ply their transport and indulge in trade between India and Tibet region as well as maintain shops and undertake petty commerce in India.
3. In contrast to these facilities for the Chinese officials and their nationals, India posts in the Tibet region and Indian nationals have faced, particularly in recent months, innumerable difficulties and disabilities in the pursuit of their official normal functions. The following are only some examples of such difficulties reported to the Government of India."
This was particularly true in Yatung.
The Note pointed out to the restrictions on the movements of the Trade Agent: "By order of Military Control Commission freedom of movement is not being permitted to our Trade Agents even in the vicinity where the Trade Agencies are located. For example the I.T.A. Yatung was not permitted to go to Rinchengang,only six miles from Yatung, where he wished to meet the Indian Trade Agent, Gyantse, and his wife, who were returning to their post from Gangtok. Similarly a junior official of the Trade Agency, who desired to return to Gangtok on short leave, was not permitted to do so."

What is use for this new railway line considering that the trade is practically nil through the Natu Pass? Why this tremendous investment? For military purpose? 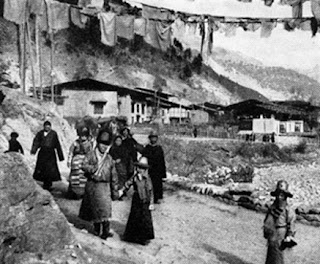 Plans on track, China rail link to stretch to near Sikkim border
Pranab Dhal Samanta
The Indian Express
February 14 2011
New Delhi : China is set to extend its Tibet railway network into the strategically important Chumbi valley area, next to Sikkim and the Siliguri corridor. This was confirmed by a Chinese Railways Ministry map, put out last month, showing China’s “long term railway network plan”.
Until now, these plans were being loosely speculated upon, but they now have an official stamp on it. The latest map shows the railway line extending from Lhasa to Zangmu on the Nepal border, which is going to eventually extend into Nepal and even Kathmandu.
According to the plan, another line will branch out midway from this link to Zangmu, at a place called Shigatse. This line will move east and go right up to Yadong, on the mouth of the Chumbi Valley. This town is connected to Sikkim through the Nathu La pass and is strategically located on the tri-junction of India, China and Bhutan.
There are areas near Yadong which are still disputed between China and Bhutan. The area witnessed military conflict in 1962 as part of the Indian effort to defend Nathu La.
While construction on the line has not yet started, sources said, feasibility studies are already being conducted. This project is slated for completion by 2017, bringing the Tibet railway just 500 km short of the Siliguri corridor. This may raise demands from Bangladesh to provide connectivity to the Chinese market via India.
This project must be seen along with the hectic progress, further east, on a railway line connecting Kunming in China to Singapore. With the Thailand government throwing its weight behind the idea, work on this project is moving at a quick pace. Given that there already exists a trade route from the Indian border to Kunming, the understanding is that pressure will increase on India to link up with the Chinese railway network.
What is of more concern to India is that the improved technological ability in this sphere means Beijing will end up meeting its deadlines. In the last year, China added over 10,000 km of high speed railway, and in the past five years has built 70,000 km railway lines. India, on the other hand, has struggled to connect Bhutan to India by rail.
Posted by Claude Arpi at 6:40 AM