Everything is fine for Brahmaputra, says Ministry 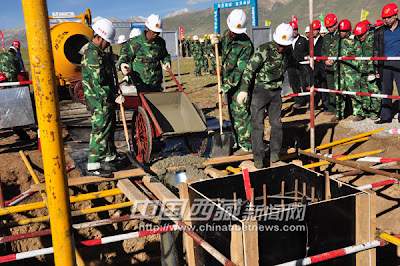 I had to read three times to believe it: "China’s plans to dam the Brahmaputra won’t affect India," says the  Ministry of Water Resources and the Central Water Commission.
The Ministry affirms: "[the Brahmaputra] enters India from China with 78 billion cu. m (bcm) of water and that 629 bcm is added after the river enters the country, and that because of this, China’s plans to dam the river and divert water should not be of concern to India."
I just think that some officials have been bribed by China, it is the only explanation which makes sense.
Tomorrow the Chinese will dam (and divert) the Indus and the Sutlej and these 'officials' will probably also say: "What difference does it make, we have the monsoon rains?" Don't you feel like crying.

Water ministry not worried by China plan to dam Brahmaputra
Sangeeta Singh
Mint
February 8, 2010
China’s plans to dam the Brahmaputra won’t affect India, according to a controversial assertion by the country’s ministry of water resources and the Central Water Commission—a contention that belies concerns to the contrary expressed by academics, activists and sections of the government, including the external affairs ministry.
The statement by the ministry was made during a meeting of a committee of secretaries chaired by the cabinet secretary K.M. Chandrasekhar in December last year.
They said the river enters India from China with 78 billion cu. m (bcm) of water and that 629 bcm is added after the river enters the country, and that because of this, China’s plans to dam the river and divert water should not be of concern to India. Mint has reviewed the minutes of the meeting.
Activists and experts say the ministry’s declaration reflects a lack of understanding.
“India needs to assert itself as a lower riparian country even though there is no binding on China not to take up projects as per international law,” said Uttam Sinha, an analyst at strategic policy research agency Institute for Defence Studies and Analyses (Idsa) in New Delhi.
By 2030, China’s water supply is expected to fall short of demand by 25% and it has very aggressive plans for water farming, he added.
Both Sinha and Himanshu Thakkar, coordinator at the South Asia Network on Dams, Rivers and People, an activist group, said they were worried about China’s plans to divert water in a 180 km stretch of the Brahmaputra before it enters India.
Thakkar said China plans to develop hydropower projects in this stretch, a so-called U-bend (because of the shape) of the river, and also pump water from there to northern China through a series of tunnels.
Central Water Commission chairman A.K. Bajaj said this was not a concern because hydropower projects on U-bends are complex and expensive. An official at the water resources ministry, who did not want to be identified, dismissed China’s plans.
These plans have caused concern in Arunachal Pradesh, a state that is trying to develop several hydropower projects on the Brahmaputra.
“Arunachal Pradesh is concerned about the possibility of Brahmaputra water diversion by China since reduction of flow would have both economic and ecological impact,” according to the minutes, citing H.K. Paliwal, the state’s principal secretary, power.
Bajaj said even a diversion would mean a reduction in water availability in the non-monsoon season to 50% of the 31.25 bcm currently available, and that this would mean a reduction of only 50% during this season in “power generation in the upper Siang” project in Arunachal Pradesh.
Bajaj described this as being “not significant”.
Activists have also pointed to the potential impact China’s plans could have on water flow in Indian states in the North-East, resulting in scarcity at some times and floods at others.
“We are also suggesting solutions for that. One is: India needs to build storage dams at various locations; and two: it should work hard on flood mitigation programmes. To be fair to China, we buy their data to keep a watch on overflowing of water during floods,” said the water resources ministry official cited in the first instance. Government data show that India’s water storage capacity is 224 days against China’s 2,200.
The Brahmaputra, known as Yarlung-Tsangpo in China, originates in south-west Tibet. It flows downstream to India, entering the north-eastern state of Arunachal Pradesh (where it is called the Siang), and then flows through the plains of Assam before entering Bangladesh.
In a speech to the Observer Research Foundation think tank in December, India’s foreign secretary Nirupama Rao said: “We are alert to reports of China damming trans-border rivers and have sought assurances from China that it will take no action to negatively affect the flow of the rivers into India. China has assured us that the projects on the Brahmaputra are run-of-the-river projects and are not meant for storing or diverting water. We look forward to working closely with China in this critical area of environmental and livelihood security.”
She could not be reached for comment on the water ministry’s assertions.
Elizabeth Roche in Delhi contributed to this story.
Posted by Claude Arpi at 7:41 AM