Chances of toppling Qadhafi are better than ever 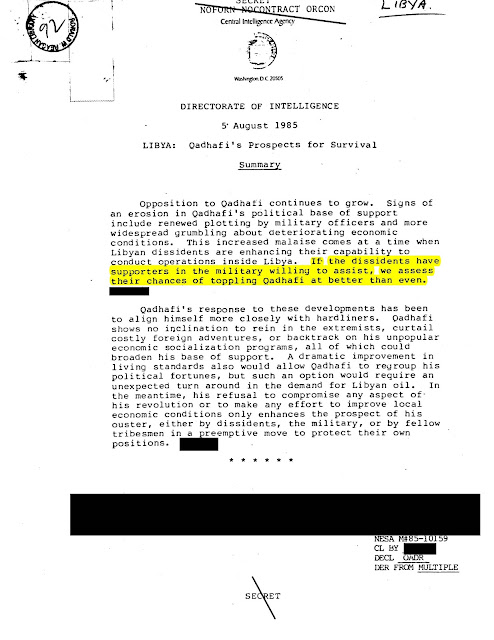 The National Security Archives Blog publishes some 'historic' documents on Qadhafi.
Two days ago, I wrote about the poor 'intelligence' of the French (soon former) Minister of Foreign Affairs who went on a 'private' visit to Tunisia when the popular revolution had already started.
The assessment of the US Directorate of Intelligence demonstrates that the Americans, like the French can be totally wrong in their assessment about an actual situation.
Twenty five years ago, the CIA believed that the chances of toppling Qadhafi (see below for the 53 different spellings) were excellent. What has happened then?
The problem is perhaps that the Western powers prefer to work with Ben Alis or Qadhafis or even ISI's generals in Pakistan or even a Politburo in China than with a democratic elected government.
Dictators, tyrants, military rulers are considered more 'stable'.
Take India for example. it is so difficult to understand who is ruling and who should be 'influenced' to get a decision through. 'Democracy' seems to confuse great powers.
Another moral of the story: a 'sage' said that God will come when wisemen eat and sleep (and they will not notice God), so perhaps the tyrants will fall when the CIA or the DGSE sleeps and the ministers  enjoy their lives.