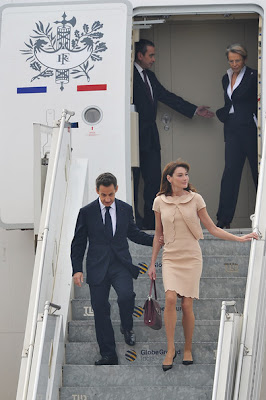 I have (quickly) translated part of an Op-ed published a couple of days back in the daily Le Monde on the French diplomacy and the tussle between the French President and the Ministry of Foreign Affairs.
The statement speaks sadly of the position of France in the world: "[Our] Europe is powerless, Africa escapes us, Mediterranean sulks, China has tamed us and Washington ignores us".
When the Minister of Foreign Affairs uses the plane of a friend of Ben Ali to go holidaying in Tunisia when the revolution is raging in the country, does it means that she is not reading the dispatches and cables from her diplomats?
Or perhaps the 'diplomats' had not seen the 'revolution' coming?
Let us pray for French Wikileaks. As the text in Le Monde states, it is the only way to know what 'our' diplomats and politicians think and do on 'our' behalf.
And what about an Indian Wikileaks? It will be fum, I am sure!
In the meantime, the Elysee Palace answered the op-ed by saying that it is just an electoral pamphlet. Easy answer, though it will not help solving a real problem for France.

One does not just become a diplomat
A group of French diplomats of different generations, some serving, some retired, of various political persuasions, decided to pen down a critical analysis on the foreign policy of France under Nicolas Sarkozy. By choosing anonymity, they imitated the military-circle group, ‘Surcouf’, who also denounced some of the choices of the Head of the State. The collective nickname chosen is 'Marly' — the name of a café where they first met. Here is their first public text.

The scheme is not fooling anyone: when events upsets the presidential stage set-up, State bodies are then made the scapegoats.
Indeed, in diplomatic matters, there are many vexations for political authorities!
In contrast with what has been trumpeted during the past three years, Europe is powerless, Africa escapes us, Mediterranean sulks, China has tamed us and Washington ignores us! At the same time, our aircraft Rafale and our nuclear industry, announced as future triumphs, remain on the shelf. Worse, the voice of France has disappeared worldwide. Our blind following of the United States has put off many of our partners.
During the Cold War, we were in the Western camp, but we could weight on both sides by an original attitude. Today, we joined the United States as shown by our return to NATO, [as a result] we do not interest anybody because we lost our visibility and ability to maneuver diplomatically. This loss of influence is not attributable to diplomats, but the options selected by the politicians [the foreign policy of France is decided by the President of the Republic].
It is clear that the President does not like the government ministry; he looks at them with an overt contempt and tries to blame them for his [failed] policy. Thus, the diplomats are designated as responsible for mishaps of our foreign policy. They reject the trial is done to them. The policy towards Tunisia and Egypt has been defined by President of the Republic without regard to the analysis of our embassies. It was the Presidency who chose Mr Ben Ali and Mubarak as the ‘southern pillars’ of the Mediterranean.
A French Wikileaks will demonstrate that French diplomats, like their American colleagues, have written critical texts without concession. If diplomats had been listened to, many errors could have been avoided. [mostly] due to amateurism, impulsivity and media short term ‘effect’.
Impulsive? The Union for the Mediterranean launched unprepared despite warnings from the Quai d'Orsay who wanted to change the purpose and method, is affected.
Amateurism? By entrusting the Ministry of Ecology preparing the Copenhagen conference on climate change, we ended up with the impotence of France and Europe and an embarrassing failure.
Media Concerns? The current tension with Mexico results from exposure of the files which by its nature, must be treated with discretion.
Lack of consistency? Our policy in the Middle East has become illegible, get caught up in dead ends and strengthens the maps of Syria. At the same time, our obvious priorities are neglected. It is so French-speaking Africa, now neglected and politically weaned from all bilateral aid.
Our foreign policy is under the sign of improvisation and successive impulses, which are often due to domestic political considerations. Do not be surprised by our failures. We are living at a time when the provincial prefects pride themselves on diplomacy, when ‘writers’ conceive grand designs, where networks representing private interests and ‘night visitors’ are ubiquitous and listened.
The time has come to react. We must find a foreign policy based on consistency, efficiency and discretion.
Posted by Claude Arpi at 8:07 AM