Some reflections on L'Affaire Karmapa 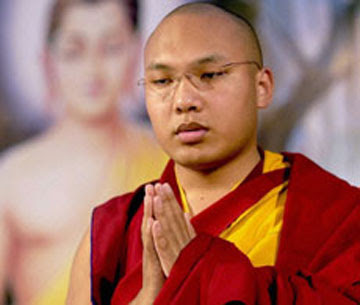 The ‘Affaire Karmapa’ seems to have come full circle.
G.K. Pillai, the Home Secretary assured a delegation of Buddhist leaders from the Himalayan region that the Government of India does not consider the Karmapa as a spy.
Pillai also advised the delegation to press on the Karmapa to make sure his staff dutifully follows the Indian system of accounting and hires a proper Chartered Accountant.
With this happy outcome, it is perhaps time to reflect:

Buddhist leaders meet Home Sec. for Karmapa
February 17, 2011
iSikkim
Smt. Spalzes Angmo, Buddhist Member in the National Commission for Minorities (NCM) led a nine member delegation of Buddhist leaders and monks from Sikkim and Ladakh to the Home Secretary, Mr. G.K. Pillai at North Block on 16th February, 2011 at 4.30 pm. The delegation pressed upon the Home Secretary that the sentiments of the Buddhist community of Ladakh, Sikkim and Arunachal Pradesh were deeply hurt by the allegations levelled by the media, intelligence agencies and state government of Himachal Pradesh that His Holiness the 17th Karmapa was a Chinese spy. They further added that the people of the Himalayan region are nationalists and patriotic to the core and have fought wars on the borders to defend their motherland.
The Home Secretary assured the delegation that the Centre did not regard His Holiness the 17th Karmapa to be a Chinese spy and that the office of His Holiness the 17th Karmapa should be advised to have knowledge of the existing laws and to hire Chartered accountants to manage the funds in a proper manner and register the trust under Foreign Contribution and Regulatory Act (FCRA). After the probe it was found that the cash received was part of donation and offerings.
The Delegation had earlier met the UPA Chairperson Madam Sonia Gandhi on 12th February, 2011. UPA Chairperson had assured the delegation that she would look into the matter so that the sentiments of the people would be assuaged.
In the light of the above, Smt. Spalzes Angmo would like to thank the UPA Chairperson, Madam Sonia Gandhi Ji, Union Home Minister Shri P. Chidamabaram and Shri G.K. Pillai, Union Home Secretary for respecting the sentiments of the Buddhists community of Ladakh Sikkim and Arunachal Pradesh by giving a clean chit to His Holiness the 17th Karmapa Urgen Thinley Dorje and for restoring the dignity of the Karmapa institution.
This would go a long way in keeping the unity and integrity of the country alive.
Posted by Claude Arpi at 8:29 AM