It will take three hundred years 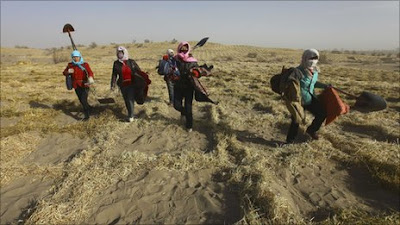 China is bound to become a new Sahel. That is why Beijing is looking at Tibet's waters to save China.
Read my earlier posting on Gua Kai.
In the meantime, the wise men of Bharat say:"They won't do it".

China official warns of 300-year desertification fight
January 2011
Martin Patience BBC News, Beijing
A senior Chinese official has said it will take 300 years to turn back China's advancing deserts at the current rate of progress.
Liu Tuo, who leads China's efforts to tackle the problem, said investment was "seriously insufficient."
More than one quarter of China is either covered by desert or is land that is suffering desertification.
The process is often caused by overgrazing and other unsuitable farming techniques.
Authorities worry that expanding deserts could put crops and water supplies in the world's second largest economy at risk.
But the official leading China's efforts against the problem said not enough was being done.
Liu Tuo said there was a "huge gap" in the country's efforts, adding that at current rates it would take 300 years to reclaim land which has recently become desert.
"There is about 1.73m sq km (0.67m sq miles) of desertified land in China, and about 530,000 sq km of that can be treated," he said.
"At our present rate of treating 1,717 sq km a year, I've just calculated we'll need 300 years."
He also warned that global warming could exacerbate the problem by causing drought.
Most of the desertification in China happens on the fringes of the Gobi Desert which lies in the west of the country.
Posted by Claude Arpi at 5:35 AM