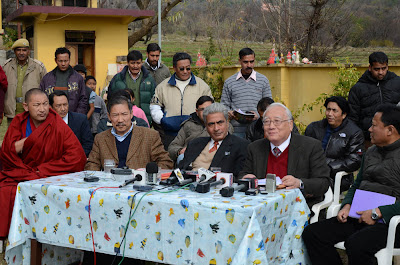 The Statement issued by the Office of the Karmapa is a welcomed development though I can't agree with this part: "It is also important to underscore that the Karmapa Office of Administration was formed to allow the Karmapas to devote their time and energy to their roles as spiritual leaders. The Office manages all the worldly affairs of His Holiness the Karmapa, including handling the donations and administering the finances. In this way, His Holiness the Karmapa is left free to fulfil his solemn duties as spiritual guide to a large, respected Buddhist order."
I feel that a modern spiritual leader should also look into 'mundane' affairs, it is part of his duties. Otherwise, there is the danger to return to old Tibet when changzoes (estate managers) were ruling the labrangs (estates), the monasteries, the country. In my opinion, it has led Tibet in the situation it is in today.It is one of the conclusions of my book The Karma of Tibet.
I am told that the young Karmapa is a very strict follower of the Vinaya rules edicted by Buddha for the monks; I am sure that it is much easier to follow the Indian accounting rules than the Buddhist Code of Conduct. The Karmapa should make sure that every manager follow the Government of India accounting precepts. It has consequences for him personally, but also for his monastery as well as the entire Tibetan exiled population.
It is also important because he has to be an example for the youth of Tibet.

Statement from Karmapa Office of Administration
1st Feb, 2011
We would like to categorically state again that the allegations being levelled against His Holiness the Karmapa and his administration are grossly speculative and without any foundation in the truth whatsoever.
We can confirm that under 5 Crores (USD 1 million) was taken by the authorities from the Monastery. This sum represents unsolicited donations that have been made by the followers of His Holiness the Karmapa from around the world to enable the substantial social and spiritual programmes of the Karma Kagyu order. Our administration has sought to acquire clearance since 2002 to deposit cash donations under the Foreign Currencies Regulation Act of India. Until the necessary permissions are granted, the Monastery diligently recorded and stored the currency on its own premises.  We are currently in the process of providing this evidence to the authorities.
As for the Chinese currency, we would like to stress that His Holiness the Karmapa has a large and devoted following of Tibetans from Tibet and of Buddhists from the Chinese mainland who make offerings in the Yuan. The Yuan found constitutes less than 10% of the cash in question, which included currency from over 20 countries.  Moreover, the Yuan seized by police include notes ranging from 1 Yuan to larger denominations, clearly indicating that they come from multiple, individual sources.
It is also important to underscore that the Karmapa Office of Administration was formed to allow the Karmapas to devote their time and energy to their roles as spiritual leaders. The Office manages all the worldly affairs of His Holiness the Karmapa, including handling the donations and administering the finances. In this way, His Holiness the Karmapa is left free to fulfil his solemn duties as spiritual guide to a large, respected Buddhist order.
We are glad to notice that the media and public no longer pays credence to the allegations that His Holiness the Karmapa maintains links with arms of the Chinese Government to counteract the Free Tibet Movement and associated causes. His Holiness the Dalai Lama furnished the final word on this issue when he underlined that this allegation was absolutely false, that he knew His Holiness the Karmapa to be an exceptionally devout and spiritual man and that our order would be exonerated of all allegations and charges by this any kind of investigation or probe. His Holiness the Karmapa is very grateful for the refuge given to him by the people and Government of India, and has nothing but the best interests at heart for the country that is the home of his faith and that has allowed him to practice his faith freely for many years.
Regarding allegations of improper land deals, His Holiness the Karmapa has been hosted in a temporary residence in Dharamsala since 2000.  As the premises belong to another Tibetan Buddhist order, the Karmae Garchen Trust has sought to purchase land and build a new residence and monastery since 2007. When the Trust identified suitable land in 2010, it informed the office of the District Collector of Dharamsala and sought their approval to proceed with the purchase. The application was accompanied by a strong letter of support from the Central Tibetan Administration of His Holiness the Dalai Lama. The trust obtained both an ‘essentiality certificate’ and a ‘no-objection certificate’ from the Town and Country Planning Department of the Himachal Pradesh Government, indicating state government approval to proceed with the plans for purchase.
Mr. Ashutosh and Mr. Sanjay, the two men arrested for carrying INR 1 Crore, were acting on behalf of  the seller of this land. The money they were carrying was partial payment for this land that had received all necessary preliminary approvals from relevant Government Departments.  The seller of the land had insisted on payment in cash. Acquiring capital assets through cash payments is perfectly legal in India.  The order had received this cash in the form of donations primarily at the yearend puja in Bodh Gaya, Bihar.
Finally, we would like to thank the many thousands of individuals across the world who have come out to express their solidarity with His Holiness the Karmapa and our order through peaceful candlelight vigils, sympathetic messages on the web, and their prayers.
We will continue to supply as much information as is available and as regularly as possible. However, our first priority remains to cooperate fully with the investigations underway.

Karma Topden
Deki Chungyalpa
Posted by Claude Arpi at 6:50 AM

The statement of the Labrang says clearly they were trying to comply with the foreign currencies regulation act since 2002 and presumably had received no reply. What else were they supposed to do with the foreign curency and where was the negligence?
I fully support the fact that HHK devote his time to spiritual work and not the maintenance of the accounts. Perhaps you should investigate the office of the Dalai Lama and see if he is the person in charge of accounts for his donations.
thanks for your post,
Naomi Levine
PS This is all clearly a set-up to discredit the Karmapa during the Karmapa 900 year.It would be good to investigate that as well.