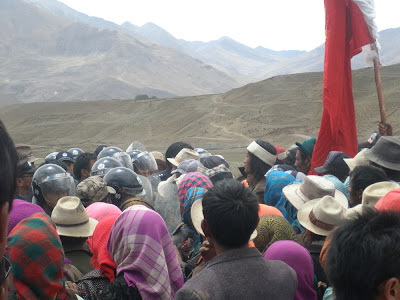 China is nervous.
One understands when one reads the three articles from the Chinese press posted below.
First, the number of major social incidents is fast increasing. A large numbers of such incidents can't be solved locally, and Beijing has to intervene. But are the issues really solved as long as there is no independent judiciary.
Then, Beijing refuses what Politburo Standing Committee Member Wu Banguo called "a multi-party political system or  diversity of the guiding ideology".
It is a pity that Mr Wu and his colleagues are unable to see that a 'democratic' system, even if not perfect like in India helps containing the often-genuine grievances of the masses.
But do they still care for the 'common men' or are they just interested to keep the monopoly of the Party?
The present leaders are perhaps less corrupted than the Qaddafis or the Mubaraks, but the repression of the ordinary people's  aspirations, is the same in China, in Libya or in Tunisia. This does not lead to stability and peace.
In the third article, the entire blame is put on the United States for the present 'flower revolutions': "the US State Department is willing to see crowds and blood in the squares belonging to other territories."
It is just too easy. In fact, the US have accommodated quite well with dictators in the past. The example of Qadaffi and others are the most recent cases. It is perhaps time for Beijing to stop blaming the West for its own problems and look into the aspirations of its own people.

Major Social Unrest Every Five Days In 2010
Source: Shanghai Jiao Tong University, January 29, 2011
http://news.sjtu.edu.cn/info/news/content/101406.htm
In January, Shanghai Jiao Tong University released its annual report on social unrest in China. The report, titled “Annual Report on China’s Crisis Management,” stated that in 2010 there was a major incident of social unrest every five days. This represents a 20% increase over 2009. The report stated that in 2009 there were 60 major incidents of major social unrest while in 2010 there were 72. Social unrest had spread throughout 29 provinces and cities (over 90%), with most occurring in Henan, Beijing, and Guangdong. About 43% of the incidents could not be resolved by the local governments and required intervention from upper levels of government to restore order. The report found that the crises hit the media much faster in 2010 than in 2009. About 33% were reported the same day and 67% were reported by Internet media, particularly through blogs.

Beijing Will Not Tolerate Democracy or a Separation of Powers
Sources: Qiushi, February 1, 2011
http://www.qstheory.cn/zxdk/2011/201103/201101/t20110128_64951.htm
People’s Daily, February 21, 2011
http://theory.people.com.cn/GB/13963415.html
On January 24, 2011, Wu Banguo, a member of the Politburo standing committee, spoke at a national conference on the Chinese style legal system. Qiushi published his speech on February 1, 2011. The highlights of his speech also appeared in a People’s Daily editorial on February 21, 2011. “Based on China's national conditions, [we] solemnly declare that we will not engage in a multi-party political system or in diversity of the guiding ideology. We will not pursue the ‘separation of powers’ and the bicameral system, or engage in federalism or privatization of property.”

Xinhua: America’s “Black Hand” Can Be Seen behind the Turmoil in the Middle East
Source: Xinhua, February, 23, 2011
http://news.xinhuanet.com/2011-02/23/c_121115542.htm
Xinhua quoted an article from a Russian media report with the same title as above to hint that the United States instigated the recent Egyptian riots. The article stated that the dramatic events happening in the Arab countries in recent weeks once again demonstrate that the United States has never observed the principle of not interfering in a sovereign country’s internal affairs. It (the U.S.) gets rid of the “dictators” from the list of its past friends in order to arrange newly “elected” dictators. As long as it can help solve the problems facing the United States, the U.S. State Department is willing to see crowds and blood in the squares belonging to other territories. Secretly starting a revolution “from within" is an ideal tool. The article quoted a report from the U.K.’s Telegraph claiming that the United Stated secretly supported the Egyptian dissidents who, three years earlier, had promised Washington they would organize a “power turnover” campaign.
Posted by Claude Arpi at 8:48 AM

Email ThisBlogThis!Share to TwitterShare to FacebookShare to Pinterest
Labels: China 2011