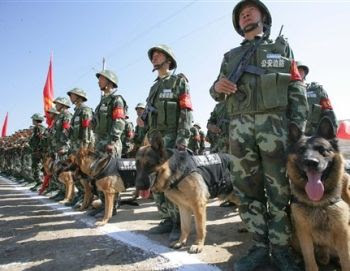 Napoleon Bonaparte, the French Emperor is supposed to have said: “When China will awake, the world will tremble”.
Today as the Arab world awakes, China is trembling. Indeed, Beijing is nervous, very nervous. It is quite apparent when one reads the Chinese press.
Already at the end of January, an article entitled Major Social Unrest Every Five Days in 2010 appeared, quoting a report published by the Shanghai Jiao Tong University on social unrest in China. The “Annual Report on China’s Crisis Management” affirmed that every five days in 2010, there was a major incident of social unrest in the Middle Kingdom. This represented a 20% increase over 2009. While 60 major incidents of social unrest were reported in 2009, it climbed to 72 in 2010: “Social unrest had spread throughout 29 provinces and cities (over 90%), with most occurring in Henan, Beijing, and Guangdong. About 43% of the incidents could not be resolved by the local governments and required intervention from upper levels of government to restore order.”
Interestingly, 67% of the incidents were made public thanks to Internet, mainly through private blogs.
If this not was bad enough, the ‘flower revolutions’ began in Tunisia and rapidly spread to Egypt and elsewhere in the Arab world, giving an ‘example’ to resentful Chinese masses.
While the leaders/dictators of the two first nations have already fallen; many more are hopefully on their way out. These unexpected upheavals did not amuse the leadership in Beijing. In China, when some protesters (one can’t call them dissidents) began to use the Internet to call for peaceful rallies in a dozen major Chinese cities, the regime had a panicky reaction.
According to the People’s Daily on February 21, Wu Banguo, a member of the all-powerful Standing Committee Politburo of the CCP stated: “Based on China's national conditions, [we] solemnly declare that we will not engage in a multi-party political system or in diversity of the guiding ideology. We will not pursue the ‘separation of powers’ and the bicameral system, or engage in federalism or privatization of property.” In other words, the Communist Party will continue to keep its monopoly over the country.
On the eve of the first rallies, a meeting of the Politburo was hurriedly called by Chinese President Hu Jintao. Amongst other things, it was decided to tighten the State control over the cyberspace and watch some ‘specific groups of people’, an ominous term targeting not only dissidents and human rights militants, but also environmentalists and all those for one reason or another do not agree with the present regime.
According to official news agencies: “Provincial heads, ministry chiefs and senior military officials were summoned to attend the meeting” and all nine members of the Standing Committee were present.
Hu is said to have told his colleagues that the session was meant “to unify the minds in the light of the new changes in domestic and foreign situations”.
Though the official agenda for the meeting was ‘to adjust [Chinas’] foreign policy’, the main objective was clearly to formulate strategies to avoid a Middle East situation. “[Hu] stressed that social management must be strengthened in order to ensure the CCP stays in power”, explained The Straits Times.
The Chinese President defined the meaning of ‘social management’: “managing the people as well as serving them.” The Chinese leaders usually speak of ‘serving the people’ only, not ‘managing’ them. This new concept was to “maximize harmonious factors and minimize non-harmonious ones,” according to Hu Jintao.
To achieve this, it was decided amongst other measures:

It was immediately implemented. Beijing's response was extremely tough when an online campaign called for weekly rallies all around China. Robert Saiget in the Sydney Morning Herald reported on one of these rallies: “Hundreds of uniformed and plainclothes police smothered Beijing's designated rally site on the Wangfujing shopping street, aggressively pushing away foreign reporters with cameras and briefly detaining several.”
The Politburo also decided to emphasize that the current turmoil ‘is plotted by the United States behind the scenes.’
Soon after meeting, Zhou Yongkang, the member in charge of national and public security confirmed that a national database containing basic information on the different strata of the population would soon be set up. He also announced that an early warning system will be put in place to alert the authorities in case of social grievances to diffuse possible incidents before they happen.
A few days later, Xinhua began to follow the new guidelines. It quoted from a Russian report ‘Black Hand Can Be Seen behind the Turmoil in the Middle East’; it accused the United States to have started the Egyptian unrest: “The dramatic events happening in the Arab countries in recent weeks once again demonstrate that the United States has never observed the principle of not interfering in a sovereign country’s internal affairs”.
The report: “The US gets rid of the ‘dictators’ from the list of its past friends in order to arrange newly ‘elected’ dictators. As long as it can help solve the problems facing the United States, the US State Department is willing to see crowds and blood in the squares belonging to other territories. Secretly starting a revolution from within is an ideal tool.”
It is perhaps time for Beijing to stop blaming the West for its own problems and look into the aspirations of its people. But nothing seems able to stop the Politburo which further emphasized that ‘greater efforts to criticize and control micro-blogs should be made’ (soon after, The Global Times published an op-ed entitled Microblogs Are Not Necessarily Such Great Things).
Hu and his colleagues seem even ready to partly shut down the Internet; in the meantime, local Party bosses were requested to “reduce reporting on any sensitive incident that might occur in your locale.”
It is a pity that the present leadership is unable to see that a 'democratic' system, even if not perfect like in India (God knows that it is not perfect!) helps containing the often-genuine grievances of the masses. But do the apparatchiks in Beijing still care for the 'common men' or are they just obsessed to keep the monopoly of the Party over the nation?
The present leaders in Beijing may be less corrupt than the Qaddafis or the Mubaraks, but the repression of the ordinary people's aspirations, is the same in China, in Libya or in Tunisia. Ultimately this does not lead to stability and peace.
One thing is sure, the world rising power seems rather shaky and trembling. From this angle, the Middle Kingdom looks like a paper tiger.
In any case, it seems obvious that Beijing has forgotten to take the masses along in its dream of wild development.
Posted by Claude Arpi at 5:59 AM