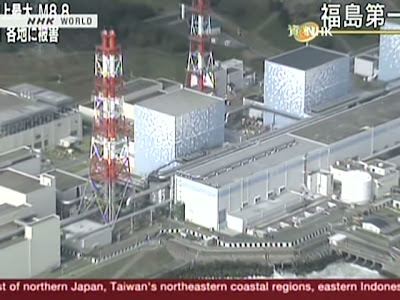 Let us hope that the tragedy in Japan will trigger some  reflection in India as well as in China where Areva is setting up nuclear plants (EPR technology).
At the same time, the 'greens' who are occupying the TV studios to lecture us against the nuclear technology, do not seem to have a balanced opinion. They are led by an one-sided 'anti-nuclear' ideology, which is unable to solve any energy problem.
A more scientific approach is required and perhaps more sustainable consumption patterns.
And the so-called clean hydropower energy is probably more dangerous than the nuclear.


NPCIL hopes techno-commercial deal with Areva in Mar-April
Kolkata, Mar 13 (PTI)
Nuclear Power Corporation of India Ltd (NPCIL) is hopeful of signing a techno-commercial agreement with France''s nuclear group Areva SA this month or in the following one.
"We expect to sign the final agreement on scope of work for Areva for building the two reactors at Jaitapur and cost will be signed within March-April," NPCIL Chairman and Managing Director S K Jain told PTI.
The state-owned nuclear power company expects to begin work on 9,000 MW Jaitapur power plant at Maharashtra shortly after the agreement.
In December last, both NPCIL and Areva had signed two agreements comprising a "general framework" agreement and an "early works" agreement for the construction of two of Areva''s Evolutionary Power Reactors, or EPRs, of 1,650 megawatts each in Maharashtra.
The agreements also covers the supply of nuclear fuel for 25 years at the Jaitapur site, which is expected to eventually have six of the 1,650 MW reactors.
India aims to expand its nuclear power generating capacity to 63,000 MW by 2032 from around 4,000 MW now.
On agitation against setting up of the nuclear power plant at Jaitapur, NPCIL officials termed the "opposition as more of a political rather than opposition from the local people".
"As the ruling Maharashtra government is in favour of the project, opposition are trying to take political mileage by opposing it," they said.
NPCIL officials said the Centre had given its nod for the project earlier, including the environment clearance. PTI BSM RG NIK

China May Consider Japan Nuclear Accident in Drafting Future Energy Plans
Bloomberg News
Mars 13, 2011
A blast at a nuclear facility in Japan after a record earthquake may become a factor in China’s drafting of future energy plans, a top planning official said.
China may consider the effects of the nuclear accident as it finalizes its energy plans for the 2011-2015 period, Xie Zhenhua, vice chairman of the National Development and Reform Commission, said in Beijing. Radiation at the Fukushima Dai-Ichi plant exceeded Japanese limits after an explosion yesterday destroyed the wall of the reactor building and injured workers following Japan’s strongest earthquake on record.
“Evaluation of nuclear safety and the monitoring of plants will be definitely strengthened,” Xie said today, while attending the closing of the Chinese People’s Political Consultative Conference.
China, the world’s biggest polluter, is building more nuclear reactors than any other nation in an effort to cut emissions and protect its environment while trying to maintain economic growth. The country is tripling the number of reactors, building 27 units to add to the 13 that are already operational, according to the London-based World Nuclear Association.
“China will become more cautious while developing nuclear- power plants but is unlikely to alter its long-term nuclear development plans,” Dave Dai, a Hong Kong-based analyst at Daiwa Securities Capital Markets Co., said by phone today. “The accident in Japan may trigger increased public concerns over building atomic plants.”

Nuclear Accident
An explosion at Tokyo Electric Power Co.’s Fukushima Daiichi No. 1 reactor, which had begun venting radioactive gas after its cooling system failed, injured four workers yesterday. The utility reported no damage to the building housing the reactor. It began flooding the reactor with sea water and boric acid today to prevent a meltdown and eliminate the potential for a catastrophic release of radiation.
China won’t change its plans to develop nuclear power after the Japanese earthquake, Zhang Lijun, vice minister of environmental protection, said yesterday.
Global expansion of nuclear power may draw more scrutiny and skepticism as the world watches Japan struggle to prevent a meltdown at the reactor damaged by the earthquake, said Peter Bradford, a former member of the U.S. Nuclear Regulatory Commission.
There are 442 reactors worldwide that supply about 15 percent of electricity, the World Nuclear Association said. There are plans to build more than 155 additional reactors, most of them in Asia, and 65 reactors are currently under construction, the association said on its website.

Emission Cuts
China has pledged to cut carbon emissions by switching to clean energy such as nuclear and wind power. It wants at least 15 percent of its energy mix to come from non-fossil fuels by 2020 and is building more atomic plants to help meet that goal.
The government may approve 10 additional nuclear power projects during the 12th five-year plan which covers the period from 2011 through 2015, the China Daily reported Jan. 26, citing Zhang Guobao, former director of the National Energy Administration. China is expected to raise its 2020 target for nuclear power generation to 86 gigawatts, accounting for 5 percent of China’s total power generation, the newspaper reported, without citing anyone.
The country is also studying specific measures to control total energy use and conduct carbon-trading trials during the next five years, Xie, who is also the nation’s top climate negotiator, said today, without elaborating.
Wang Ying. Editors: Allen Wan, John Liu
Posted by Claude Arpi at 2:07 PM