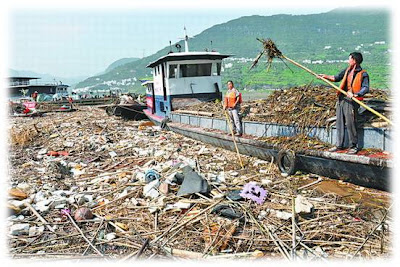 In the 1980’s, the American agronomist Lester Brown wrote Who Will Feed China in which he studied the cases of Japan, Korea and Taiwan. The conversion of agricultural land for other uses (factories, residential areas, airports, roads, flyovers, etc…) had provoked the loss of 52% of Japan’s grain harvested areas, 46% of Korea’s and 42% of Taiwan’s, while more and more waters were being used for industrial purposes. Brown deducted that the same process will occur in China and ultimately China will be unable to feed its own people. A real nightmare for Beijing!
But ultimately the problem will be the lack of water to irrigate and to ...drink.
This is confirmed by this report of the National Development and Reform Commission (the Chinese Planning Commission).
It is why China needs Tibet. But as the Sichuan earthquake has shown, the big dams are as dangerous as the nuclear plants (if not more) for the downstream populations.