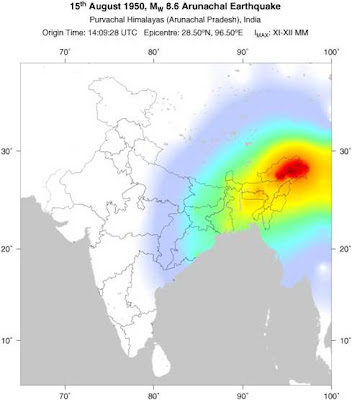 At 14:09 hrs on August 15, 1950, one of the most powerful earthquake of the 20th century occurred in Tibet.
According to a Report of the US Geological Survey: “At least 780 people killed and many buildings collapsed in the Nyingtri (Rima, Zayul) area of eastern Tibet. Sandblows, ground cracks and large landslides occurred in the area. In the Metok area, the village of Yetong slid into the Yarlung Zangpo (Brahmaputra) River and was washed away. The quake was felt at Lhasa and in Sichuan and Yunnan Provinces, China. Severe damage also occurred in the Sibsagar-Sadiya area of Assam, India and in the surrounding hills. About 70 villages were destroyed in the Abor Hills, mostly by landslides. Large landslides blocked the Subansiri River. This natural dam broke 8 days later, creating a wave 7 m (23 ft) high which inundated several villages and killed 536 people. The quake was felt as far away as Kolkata.
Many sources call this the Assam-Tibet earthquake or even the Assam earthquake, even though nearly all place the epicenter in Tibet. Thus it is possible that the casualties for Tibet are not included in the total, as well as those from the Subansiri River flood. Furthermore, Gu et al. do not give casualty totals for Yetong or other areas of the most severe damage in Tibet. Therefore, the actual casualty toll may be much higher than the value given."
The magnitude of the earthquake was 8.6 or 8.7.

The young Dalai Lama who was then in Lhasa wrote in his biography: "It was like an artillery barrage – which is what we assumed to be the cause of both the tremors and the noise: a test of some sorts being carried out by the Tibetan army… Some people reported seeing a strange red glow in the skies in the direction from which the noise came…."
Another witness was Robert Ford, the British wireless operator working for the Tibetan government in Eastern Tibet. He remembered: "This was no ordinary earthquake; it felt like the end of the world. Mountains and valleys exchanged places in an instant, hundreds of villages were swallowed up, the Brahmaputra River was completely rerouted and for hours afterwards, the sky over the south-eastern Tibet glowed with an infernal red light, diffused with the pungent scent of sulphur."
A few days later, Jawaharlal Nehru, the Indian Prime Minister visited Assam south of the epicentre in Tibet. He noted: "As a result of the landslides, rivers were blocked up for a while, and when they broke through, they came down with a rush and a roar, a high wall of water sweeping down and flooding large areas and washing away villages and fields and gardens. These rivers have changed their colour and carried some sulphurous and other material which spread a horrible smell for some distance around them. The fish in them died. The remains of villages, animals, including cattle and elephants, and large quantities of timber floated down these raging waters."
Now the governments of China and India are planning mega-dams in the same area. Beijing even speaks of cascades of hydropower stations.
Though extremely worrisome, the situation described in the China Daily about new dams on the Salween river would probably far more catastrophic than an earthquake in Nyingtri area, mainly because of the larger dams on the Brahmaputra and its tributaries: millions would be washed away in Arunachal, Assam and Bangladesh.
One healthy development: the Chinese media has started mentioning these issues. It is good and necessary before it is too late.
The earthquake and tsunami in Japan will hopefully trigger more researches and inject some 'thinking' cells in the brains of the 'developers'.
Not sure, because the greediness of the politicians has no limit.

Earthquake casts doubt on hydropower
By Li Xing and Wang Huazhong
China Daily
2011-03-12
BEIJING - The 5.8-magnitude earthquake that struck Yingjiang county, Yunnan province, was a deadly reminder that local officials should be careful in planning hydraulic power projects for the Nujiang River valley in the province.
Wang Jirong, a member of the Standing Committee of the 11th National People's Congress (NPC), has prepared a proposal calling for the central government to "pay attention to the special and complex geological and seismological conditions in the Nujiang River valley and take caution in making decisions about hydraulic power development there."
Even so, Hou Xinhua, an NPC deputy and head of the Nujiang Lisu autonomous prefecture, is asking the central government to hasten the construction of a hydraulic power project along the Nujiang River's main stream. Consisting of a reservoir and four dams, the project is to be capable of generating up to 180,000 kilowatts.
Nujiang River is one of the longest free-flowing rivers in the world and is one of the Three Parallel Rivers listed as a world nature heritage in June 2003. It flows to Myanmar, where it is called Salween, and to Thailand, where it is called Salawin.
Despite the river's physical grandeur, the Nujiang valley is one of the least-developed areas in China. According to the statistical bureau of the Nujiang prefecture, more than 80 percent of the 510,000 people who live there are farmers in mountainous areas.
The valley itself lacks much in the way of flat fertile land. But its sharp vertical walls and abundant water supply make it nearly ideal for generating hydraulic power.
"People in Nujiang prefecture live on the fringe of poverty according to the new national poverty line, which was set at 1,196 yuan ($182, annual income)," Hou told China Daily, adding that poverty is prevalent among more than 90 percent of the members of the small ethnic groups in China.
"We should be able to scientifically develop (hydraulic power) while protecting the environment," Hou told China Daily.
He said the project and the power it generates will improve the local economy and residents' standards of living, while increasing China's use of renewable energy.
"The people in Nujiang hope to push forward with the hydraulic project," Ma Zhengshan, an NPC deputy also from Nujiang, told China Daily.
Ma, deputy secretary-general of the prefecture government, said about 120,000 local people will be relocated if the project is approved.
Ma said close to 500 scientists have studied the valley.
Wang Jirong, who is also vice-chairwoman of the NPC's Environment Protection and Resources Conservation Committee, said that a series of national studies have revealed that the area is especially prone to geological and seismological disasters.
There is a consensus that the area's geological conditions are complex, Wang said. But those who favor pursuing the generation of hydraulic power argue that they can still find "solid ground" for such a project.
"My question is: Can a lot of cement do anything about instability deep down in the earth's crust?" Wang said. "We must be able to make clear the connections between one location and the whole region."
Above all, decision-makers should consider what harm a geological or seismological disaster of the worst proportions imaginable would do to the proposed project, she said.
Guo Anfei contributed to this story
Posted by Claude Arpi at 12:14 PM