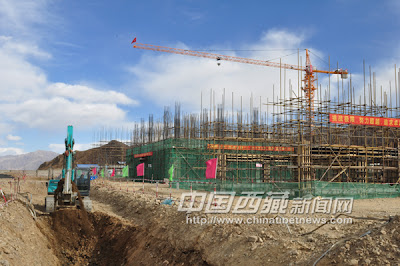 Xinhua already announced that one important item on the agenda during the two sessions will be the review and approval the outline for China's 12th quinquennial plan covering the period for 2011 to 2015.
Xinhua explains: "Since 1953, China has drawn up eleven five-year plans. Through the implementation of these plans, China has achieved marked successes. China's annual economic growth rate exceeded 10 percent during the past five years. In 2010, China's gross domestic product expanded 10.3 percent year on year to 39.8 trillion yuan (6 trillion U.S. dollars), surpassing Japan as the world's second largest economy."
Increase in power projects (particularly in Tibet) will be on the table of the deputies. As one can see from the two articles below that Beijing has already decided to give a great boost to power projects in Tibet.  The future is quite ominous. And the Tibetans have no say in the matter.
Interestingly, an article in The Telegraph  mentions that the earthquake that killed 87,000 people in Sichuan last year was probably triggered by a dam close to the epicentre: "The 511ft-high Zipingpu dam holds 315 million tonnes of water and lies just 550 yards from the fault line, and three miles from the epicentre, of the Sichuan earthquake. Now scientists in China and the United States believe the weight of water, and the effect of it penetrating into the rock, could have affected the pressure on the fault line underneath, possibly unleashing a chain of ruptures that led to the quake", says The Telegraph.
Fan Xiao, the chief engineer of the Sichuan Geology and Mineral Bureau in Chengdu is quoted as saying: "it was very likely that the construction and filling of the reservoir in 2004 had led to the disaster. There have been many cases in which a water reservoir has triggered an earthquake, this earthquake was very unusual for this area.There have been no seismic activities greater than a magnitude seven quake along this particular seismic belt before."
Even more ominous. 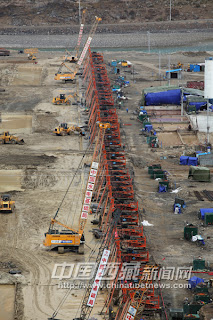 Hydropower projects speed up in Tibet
China Tibet Online
2011-02-28
Amanda Wu
Currently, a number of key hydropower projects are being constructed simultaneously in southwest China's Tibet Autonomous Region, Tibet Daily reported.
In a bid to push forward its economic and social leap-forward development and long-term stability, Tibet recently formulated a medium- and long-term energy development plan to make detailed arrangements for the region's energy construction.
The Phomdo Water Control Project mainly is aimed at irrigation and power generation with due attention to flood control and water supplies.
With a planned reservoir capacity of 1.23 billion cubic meters, the project will be able to irrigate an overall farmland area of 16,370 square kilometers, expected to produce 255 more tons of grain.
The construction of the Phomdo Project, with a total investment of about 4.57 billion yuan, is estimated to last 69 months.

Chamdo to expedite energy base construction
China Tibet Online
2011-02-28
Amanda Wu
Eastern Tibet's Chamdo Prefecture will accelerate the national-level energy base construction with an overall installed capacity of over 5 million KW by the end of the 12th Five-Year Plan period (2011-2015), Tibet Daily reported.
With abundant hydroelectric resources, Chamdo boasts an investigated power reserve of up to 40.46 million KW.
The installed power capacity of the prefecture had totaled 117,000 KW by the end of 2010.
According to the water-resource development plan, Chamdo will build 30 terraced hydropower stations along the Drichu River, Dachu River and Ngulchu River.
In the next five years, Chamdo will intensify its comprehensive water-resource development to boost the national-level energy base construction.
Posted by Claude Arpi at 6:37 AM