The Dalai Lama about his 'retirement' 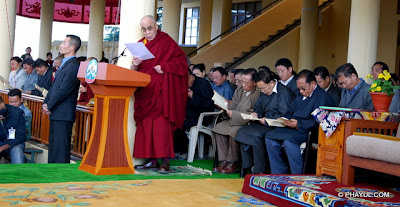 The Dalai Lama has announced that he will retire from active politics. Nothing new.
In an interview in 2006, he told me about his motivations: "I have three commitments: promotion of human values, promotion of religious harmony and promotion of awareness of Tibetan cause.

Is there an order in these commitments?

Yes, it is in this order.
First, as a fellow human being, promotion of human values is my first priority, this covers 6 billions of human beings.
Then second, I am a Buddhist, and as a Buddhist I want to promote religious harmony: it addresses perhaps half of these 6 billions who are religious believers.
The third one is about Tibet. There is 6 millions of Tibetans and if you take the Tibetan environment, there are more than 100 millions of human beings dependent on Tibet. North India, Pakistan and Bangladesh depend on river flowing from Tibet: (Ganga, Brahmaputra) then Mekong in Indochina, and in China, Yellow River, Yangtze and many others rivers. But my three commitments are not separate, there are interlinked.
But the Tibet issue is also connected with human values and inter-religious harmony. Out of three commitments, number one and two are mostly on volunteer basis. Till my death I committed myself to these causes. Regarding the third one, in a way it not a voluntary commitment, it is due to past history and to the he Dalai Lama institution. I am bound to this commitment and this responsibility, because I am the Dalai Lama who played a role in past history of Tibet.
More importantly, Tibetans inside and outside Tibet put their total trust in me.
They put their hopes into me; that is why I have the moral responsibility to serve them as much as I can. In the meantime, the Tibetan cause is the cause of a nation, this struggle should continue from generation to generation. My life represent only one generation. It is therefore very important, for the people themselves take more responsibilities.
Secondly, we are deliberately promoting democracy. We truly believe in this concept: for the past 46 years, we are fully committed to the democratization of the Tibetan society. Our biggest achievement is to have now an elected leader, the Kalon Tripa [Prime Minister]. Since the last elections (4 years ago), I consider my position as of a semi-retirement. If we return to Tibet with a certain degree of freedom, then I will fully resign. Therefore, my third commitment has some limitation. But even in my complete retirement, I will continue with the promotion of human values and promotion of religious harmony.

You speak about democracy, but if a poll is undertaken today, nobody will vote for your retirement!

[Joking] My retirement will not be through voting, it is my individual human right [laughing].Already all the important decisions are taken by Samdhong Rinpoche [Tibetan Prime Minister]. I deliberately did so. Of course, sometimes, he comes and asks my opinion and whatever I say, he may listen.
[The Dalai Lama jokes] People believe that internally, I am authoritarian, while externally I am a democrat. [Laughing]. Of course, it is not true, I intentionally fully rely on him. In fact, if I had the full responsibility and that one day I die, then there would be total chaos. This [democratic] process started 20 years ago and I often tell the Tibetans officials: “You should carry full responsibility as if there was no Dalai Lama, because for the work you can do, you should take full responsibility. That way I will have more energy and time to do some other work that you can not do.”
[And things] like the promotion of human values, no Tibetan can do this [as I do].

A few weeks ago I wrote about the Karmapa Affair: "Another complicating factor is the media (Indian and foreign), which often tries to project the young Lama as the Dalai Lama's political successor. The media forgets that the present Dalai Lama has ceaselessly worked from the early 1960s to introduce democracy in the exiled community. To have a 'political successor' would negate all these years of hard work. Would a 'political successor' prevail over an elected prime minister whose election is due in March? Tibetan democracy would then become a laughing stock."
This is still valid today and explains why the Dalai Lama has announced his 'retirement'.