More importantly, we have to make people happy 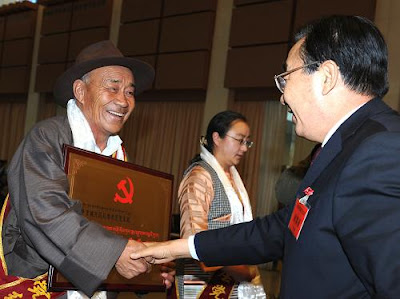 Padma Choling, alias Pema Thinley, the 'Chairman' of the Tibetan Autonomous Region told the National People's Congress: "More importantly, we have to make people happy".
Is it an admission that sixty years after the 'liberation' of Tibet, the Tibetans are still not 'emancipated' and are still unhappy.
Padma Choling quotes President Hu Jintao: "Meticulous efforts must be paid to the tasks of reform, development and stability to boost leapfrog development and maintain perennial stability in Tibet".
The 'stability' of the region seems to obsess the leadership in Beijing.
Why? Simply because the'masses' like in Tunisia or Egypt are 'unhappy'.
Will the new lollipops announced during the National Congress make them happy? It is doubtful.
In the meantime, the Communist government in Lhasa has decided to stop the visit of foreign visitors on the Roof of the World.
Zhang Qingli, the Party chief of Tibet who is attending the annual parliament session in Beijing found a great excuse: "The temporary measures on restricting foreign tourists to Tibet were mainly due to the current cold winter weather, limited accommodation capacity and safety concerns, a high-ranking official said on Monday. The plateau region is still in deep freeze in March and lots of religious activities will be held."
Beijing has a serious problem with the political climate!

Chairman promises changes for Tibetans
2011-03-07
China Daily
BEIJING - Tibetans are being urged to embrace the opportunities that development will bring to their region, said the chairman of the Tibet autonomous region.
"Tibetans should fully take advantage of the region's development," said Padma Choling, who is also a deputy of the National People's Congress (NPC).
"Now that the transportation infrastructure in Tibet has been dramatically improved in recent years, I hope they will go out more, instead of staying at home, so they can earn more income."
And Padma Choling said he is hoping Tibetans become more proactive in the years to come.
"They are being encouraged to be more open-minded toward new things, such as running their own business or even working outside of the region," he explained.
President Hu Jintao on Sunday said Tibet must maintain social stability and push forward reform to achieve sound development.
"Meticulous efforts must be paid to the tasks of reform, development and stability to boost leapfrog development and maintain perennial stability in Tibet," Hu told the Tibetan delegation to the NPC.
Hu stressed the fostering of the region's peculiar and competitive industries, development of modern agriculture and animal husbandry, improving infrastructure and environmental protection in achieving leapfrog development.
The president was with the Tibetan delegation to deliberate a government work report and the country's new five-year plan delivered at the fourth session of the 11th NPC.
The autonomous region's government has recently launched a program aimed at helping people purchase vehicles in order to start up passenger transportation businesses. The project calls for the government to cover some of the cost of the vehicles and pay for fuel during the first year.
"To ease people's fears, we have to help some make the first step and help them enjoy success, then others will follow," Padma Choling told China Daily in an exclusive interview.
He said the region's government helped arrange work for more than 20 Tibetans in coastal Guangdong province last year under a pilot program.
"After seeing how much money those people made and how pleasant their experiences were, some villagers who used to be afraid of working elsewhere decided to give it a go," he said.
"Although Tibet has achieved fast development in the past five years, it is now transforming from fast development to comprehensive development."
Padma Choling said that, in the next five years, Tibet's priority will be to improve people's livelihoods and ensure everyone benefits from the development.
"More importantly, we have to make people happy," he said. "For Tibetans, happiness means living a safe and comfortable life."
The farmers and herders that make up 80 percent of the region's population earned around 3,990 yuan ($607) each last year, which was a lot less than the national average earned by farmers of 5,919 yuan for the year.
Padma Choling said raising people's standard of living will be an important priority. The first step in achieving that will be to settle people down so they can have a safe place to live and ensure they can receive free medical care and education, he explained.
Tibet is expecting to encourage farmers and herders to end their nomadic lifestyles within three years and then plans to ensure people's incomes increase by developing a more complex economy that extends beyond agriculture.
As a relatively undeveloped region, Tibet has received 7.57 billion yuan in aid from inland places as well as government organizations during the past five years. State-owned firms and other institutions have also been helping with the autonomous region's development.
A total of 2,661 officials and professionals from other parts of China have worked in Tibet for periods of one to three years to encourage more technological and management expertise.
Posted by Claude Arpi at 2:59 PM