New Mega Dam on the Mekong 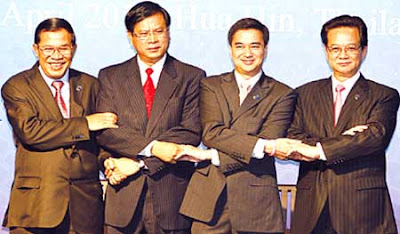 India should watch with interest the reactions of the Mekong Commission. The new dam on the Lanchang (Mekong) will have serious ecological consequences for the nations downstream (Thailand, Cambodia, Laos and Vietnam).
Beijing has so far refused to be a member of the Mekong Commission, considering that the mighty river belongs to Middle Kingdom and therefore the Chinese leadership does not need to inform the four downstream nations when megadams are built in Yunnan Province of China.
This is called international collaboration with Chinese characteristics.
The same process will probably be followed for the Yarlung Tsangpo (Brahmaputra). Will India protest?

Huaneng Lancang River Hydropower largest hydropower Nuozhadu approved by the State
March 25, 2011
Xinhua
Kunming, March 25 (Xinhua Zhao Dachun) reporter from the Huaneng Lancang River Hydropower Co., Ltd. was informed that the national key project, the largest planning and construction of the Lancang River Basin hydropower - Huaneng Power Station Nuozhadu formally approved by the State.
Huaneng Lancang Nuozhadu hydropower station is located downstream of the city of Pu'er in Yunnan Province, is planning the Lancang River Cascade River "second reservoir eight" in the fifth grade, but also the scale of the Lancang River Basin project and adjust the capacity of the largest power station, the total installed capacity of power plant capacity of 5.85 million kilowatts, with a total investment of about 450 million power station installed 65 million kilowatts units 9 units to ensure the output was 240 million kilowatts, the annual average generating capacity of 23.912 billion kwh.
Huaneng Nuozhadu Hydropower Station is the "West to East" and "outgoing electric cloud," the key project, also in Yunnan hydropower-based electricity nurture pillar industries, the construction of hydropower energy base important project. After the completion of power plants, has made great economic benefits in the same time, power saving and emission reduction benefits will be fully reflected. It is estimated that all the generating units, the equivalent to saving 9.56 million tons per year for the state of standard coal, reduce carbon dioxide emissions of 18.77 million tons. At the same time, will reduce the amount of waste water, sludge, dust and other pollutants.
Huaneng Power Project Nuozhadu design indicators of high and complex geological conditions, according to the plan, the dam, spillway, and other underground plant at home and abroad a number of technical indicators are among the forefront of gravel clay core rockfill dam straight dam is the same in Asia, the world's third; underground plant is currently one of the larger underground; open spillway size of Asia, and discharge power and flow rate ranks first in the world.
Posted by Claude Arpi at 12:45 PM