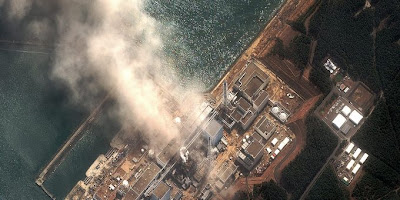 With the Nippon tragedy rapidly unfolding, Naoto Kan, the Prime Minister of the Land of the Rising Sun, announced that the levels of radioactivity have again risen in the Fukushima nuclear power plant. The population has now been evacuated from a zone of 30 km around the nuclear facilities.
In an address to the nation, Naoto Kan declared:"We are making every effort to prevent the leak from spreading. I know that people are very worried, but I would like to ask you to act calmly."
Luckily, the Japanese are among the most composed and disciplined people on the planet.
Authorities admitted that four explosions have already occurred at the plant since the massive earthquake (followed by a tsunami) struck the Japanese coast last week.
The plant’s operator Tokyo Electric Power Co announced that the Fukushima reactor No.2 has become the main concern for the engineers, while the fuel rods of reactor No.1 and No.3 reactors have partially melted.
For Kan, Japan faces its worst crisis since WW II. Many believe that the tragedy could send the world's third-biggest economy back into recession. As a result of the catastrophe, Japanese stocks have plunged to their lowest level in nearly two years ($500 billion loss for the market).
I happen to be in France, the land of nuclear energy, when the tragedy has occurred. Since the end of the 1970’s, France has built 59 reactors producing 63 GW, a staggering 78% of the total electricity required by the country. Soon after the news of Fukushima started flashing on our TV sets, a hot debate began on French national media: can such a disaster happen in France? Is it not time to abandon the nuclear for ‘cleaner’ energies such as wind and solar?
The ‘Greens’ led by Daniel Cohn-Bendit, the former leader of the 1968 student revolution and now European MP, demanded a referendum on nuclear energy. ‘Green ideology’ is one thing, running an industrialised country is another; we can however see many advantages in a serious debate: it can only help to clarify several points about the safety of the plants, though the seismicity level in France is not the same as Japan’s and the third generation reactors are far safer than the ones in use in Japan.
One could regret the absence of Areva in the French debate. The French company perhaps believes that the question is far too serious to be discussed by ‘lay ignorant’ people, but unless and until the true risks are explained to the ‘common man’ in a way he can understand, the discussion will (and should) go on. Another issue is that Anne Lavergeon, the Chairperson of Areva is due for reappointment by President Sarkozy as her term finishes in June; to engage in such slippery discussions may be risky for her future career.
This comes soon after the Nuclear Power Corporation of India (NPCIL) and Areva signed a framework agreement for the construction of two Evolutionary Power Reactors (EPRs), to be followed by four more, at Jaitapur in Maharashtra (with a capacity of 1650 MW each). Shreyans Kumar Jain, chairman of the NPCIL immediately admitted that the potential meltdown in Japan might be ‘a big dampener’ on India’s program which plans to spend $ 175 billion on nuclear energy by 2030. The accident has also become a major factor for China; both nations consider that nuclear energy is still the cleanest energy to sustain a 9% to 10% economic growth.
The economic media Bloomberg believes that Manmohan’s nuclear dream might be threatened: “Manmohan Singh who risked his premiership to secure India’s access to atomic reactors and supplies, faces opposition to his $175 billion investment plan after Japan’s strongest earthquake triggered a nuclear accident.”
The problem for India may not be earthquakes, as no seism of this amplitude has ever been recorded in Western India (it is not the case in Arunachal Pradesh where the government is planning mega-dams), but terrorism. Suppose a jihadist group hijacks a plane after take-off from Mumbai and manages to crash with full tanks in Jaitapur, will the structure resist such an impact?
It depends of course on the design provided by Areva, but also on the construction of the concrete slabs and walls monitored by NPCIL. One can only hope that no ‘CWG techniques’ will be used for the construction.
In the meantime, Germany and Switzerland have declared a moratorium on new nuclear plants. Can India afford it?
One thing India can do is to invest heavily in research on thorium technology; it might be a safer solution.
Posted by Claude Arpi at 8:52 PM