Japan on the side of a knife, Nu River on the blade 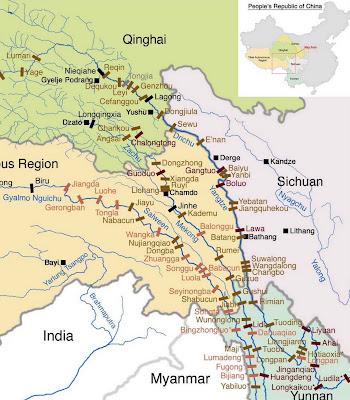 It is comforting to see that the Chinese public public and media are now aware of the danger caused by large dams in seismic zones.
Unfortunately, India is blissfully ignorant (or chose to be ignorant) of this fact. Corruption continues to be rampant in the sector and the dam lobby is extremely powerful.
The Opposition is too much in a reacting mood as many Wikileaks cables show to play any positive role on this issue.
Recently, the government of Arunachal Pradesh announced that the State will be one of India's leading power producers by 2022-23, 'after most of its allotted power projects are commissioned'.
Governor Gen (Retd) J J Singh stated: "The annual revenue accrual to the state is likely to be of the order of Rs 10,000 crores after complete commission of the projects with an estimated capacity of 57,000 MW."
Provided of course that there is no earthquake before.

Liu Jianqiang is the Beijing-based deputy editor of chinadialogue.
Posted by Claude Arpi at 12:54 PM