Is the Zangmu dam 'clean'?

This is in continuation to my previous post on the new electricity grid recently launched between Chamdo and Sichuan.
I raised the question: once the dams on the Brahmaputra are complete, will this (grid) investment be used to send electricity from Tibet to Sichuan or vice-versa.
We shall know soon, as the first run-of-river hydropower plant at Zangmu on the Yarlung Tsangpo, (which becomes the Siang and later on the Brahmaputra), is now operational.
Xinhua announced yesterday: "Tibet's largest hydropower station became partly operational, harnessing the rich water resources of the Yarlung Zangbo [Tsangpo] River to develop the electricity-strapped region."
It is the first generating unit of the  Zangmu Hydropower Station (costing 1.5 billion U.S. dollars). The project is located at 3,300 meters above sea level.
Xinhua says that "five other generating units are due for completion no later than next year", adding "the huge project, which straddles the middle reaches of the roaring Yarlung Tsangpo River, will have a total installed capacity of 510,000 kilowatts [510 Mws] upon completion. It is designed to generate 2.5 billion kilowatt hours of electricity annually."
According to Chinese official statistics, Tibet's per capita electricity consumption in 2013 was slightly over 1,000 kilowatt hours, less than one third of the national average.
Will the entire production of electricity of the 5 'officially' planned dams on the Tsangpo be used on the Tibetan plateau or will it be sent to the mainland? 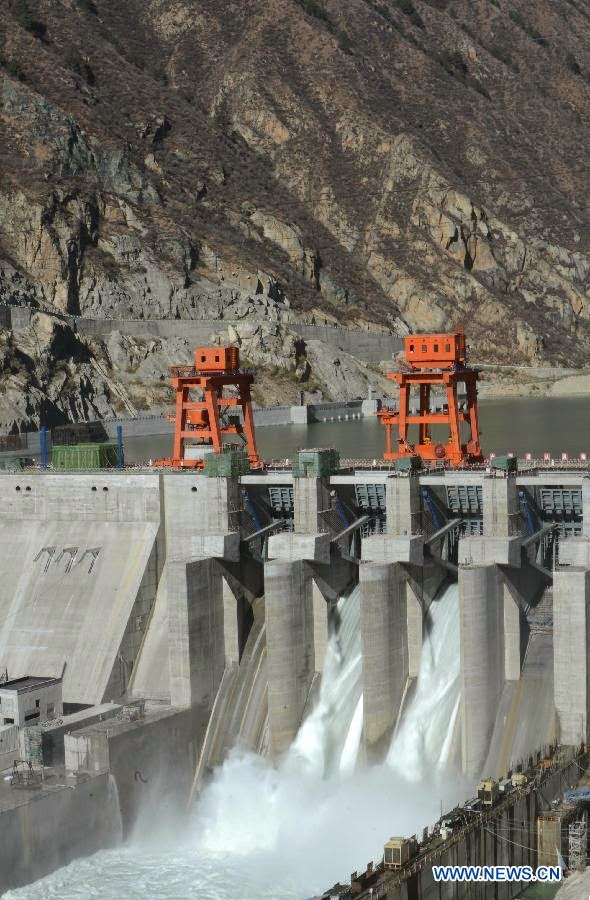 The official news agency is obviously mum on the subject, though Liu Xiaoming, an official of the State Grid's Tibet Electric Power Co affirms: "The hydropower station will solve Tibet's power shortage, especially in the winter."
Tibet's Development and Reform Commission (local Planning Commission) asserts that "the region's installed power generating capacity was 1.48 million kilowatts.Tibet has annual water resources totaling 448.2 billion cubic meters, with potential water power resources reaching 201.36 million kilowatts. It holds nearly 30 percent of the nation's total water power resources."
It is a boon or a curse for the Roof of the World?
And what about the environment?
Though Lobsang Gyaltsen, the head of the Tibetan government declared: "The region has strived to protect the environment throughout construction. The hydroplant is a good example of clean energy development," run-of-river plants are not today considered 'clean' anymore.
There is no doubt that the life of the river between the 'intake' of the diversion and the power station downstream will be badly affected.
One has recently seen the negative consequences of the 'run-of-river' plants in Uttarakhand (see my post, Dam is money, dam is destruction too).

The Xinhua communique affirms: "A total of 320 million yuan has been invested in the Zangmu hydroplant project to build environmental friendly facilities such as sewage treatment plants, garbage recycling stations and fish protection stations."
Will China let environmentalists visit the site and study the state of the river before the diversion and after the power station?
I doubt.
According to Bo Lunzhang, an official of the regional environmental protection bureau. "The Yarlung Tsangpo River requires much higher protection standard than any other rivers in China, and the experience of Zangmu station may be learnt by other hydropower projects in Tibet."
China may learn from the Zangmu experience, but run-of-river plants elsewhere in India and the world have been very damaging for the environment (the aquatic life of the river for example).
Will the waters entering Upper Siang district of Arunachal Pradesh be different now?
India should carefully and scientifically monitor, not only the flow of the Siang, but also the quality of the water.
Article 12 of the 'Implementation Plan' signed in June 2014 between Indian and China for providing 'Hydrological Information of the Yarlung Zangbu/ Brahmaputra River in Flood Season by China to India' says: "In order to ensure normal provision of hydrological information, if necessary, after mutual consultation through diplomatic channel, the parties may dispatch hydrological experts to each other’s country to conduct study tour according to the principle of reciprocity."
Why can't Delhi ask Beijing's permission to send a team of hydrological experts to visit the dam and get some clarity on what is going on?
Posted by Claude Arpi at 7:19 AM