Why India needs to get tough with China 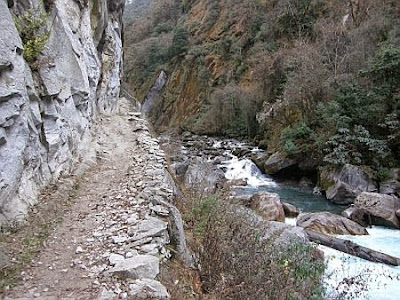 My article Why India needs to get tough with China appeared in Rediff.com

'It is certainly time for New Delhi to open up. Not only should it go ahead at full steam with the roads to the LAC, but the government must also allow tourists to visit these stunningly beautiful areas of Indian territory,' says Claude Arpi.

China is unhappy about India's plans to build a road on the southern side of the McMahon Line in Arunachal Pradesh.
A couple of weeks ago, Hong Lei, the Chinese foreign ministry spokesman, stated 'The boundary issue between China and India is left by the colonial past. We need to deal with this issue properly. Before a final settlement is reached, we hope that India will not take any actions that may further complicate the situation.'
'We should jointly safeguard peace and tranquility of the border area and create favourable conditions for the final settlement of the border issue,' he further asserted.
The proposed billion dollar project on the Indian side of the India-Tibet border was announced by Union Minister of State for Home Affairs Kiren Rijiju during a visit to his home state, Arunachal Pradesh.
Rijiju hoped the construction of the 1,800 km road could begin soon. The minister also said the road would be the 'biggest single infrastructure project in the history of India.'
One could, of course, have asked Hong when China decided to build a road through the Aksai Chin plateau in the early 1950s, was not Beijing 'complicating' the border issue with India?
More recently, during his monthly press conference, Chinese defence ministry spokesman Yang Yujun also 'urged India not to take actions that will complicate the situation on the border, where the two countries have territorial disputes.'
Yang's remarks were made in response to a question about Delhi's plan to build 54 border posts in Arunachal Pradesh ('Southern Tibet' for Beijing).
'We have taken notice of the reports,' Yang Yujun said, adding, 'China and India have disputes over the eastern part of their border. We hope India will try to help maintain stability and peace in the border areas, instead of taking moves that may further complicate the situation.'
China, which has built extremely good roads to the LAC, objects to India struggling to build infrastructure to her side of the LAC where the terrain is extremely difficult.
From the Indian side, there is a strange feature to the plan announced by the government: The road would run parallel to the LAC in Arunachal Pradesh.
Lieutenant General J S Bajwa (retd), the editor of the Indian Defence Review who has held senior positions in the Indian Army's Eastern Command, believes the project is 'specious at best and is likely to remain a pipe-dream for a long time to come.'
The general writes in the IDR: 'In 1997-1998 there was a determined move by the then National Democratic Alliance government displaying a purposeful urgency in an effort to construct road axes right up to our northern boundary. It was then planned to construct a total of 11 roads. Nine roads were in Arunachal Pradesh towards the LAC. One road was to be constructed in the then Uttar Pradesh and one in Ladakh.'
Even for a non-expert, it makes sense to reach the LAC by following the valleys and rivers, all flowing in a north-south direction. Who had this awkward idea, to say the least, to cut across the mountain ranges to have a road 'parallel' to the McMahon Line?
When I asked an Arunachalee friend who knows the area well, what he thought of the 'parallel' road, he just laughed, he did not even want to answer.
As General Bajwa explains: 'The geographical peculiarity of Arunachal is that the river valleys and the mountain ranges in the state run more or less in a north-south alignment. Between the Kameng sector in the west and the lower Subansari, in the centre, there is a vast swathe of land that is unassailable. The major rivers east of Kameng sector are Kameng, Kamla, Kurang, Subansari, Shyom, Siang, Dibang, and Lohit. These rivers have their source in the north in the glaciated regions along the watershed and some north of the watershed too.'
Knowing well the topography of the area, the general adds: 'The volume of water and the current of these rivers, particularly in the monsoon season is awesome. As a consequence these rivers have created deep gorges along their course down to the plains.'
Are some people in Delhi or Itanagar trying to sabotage the entire project whose main objective is to reach troops to the border as quickly as possible in case of conflict?

Click here to continue...
Posted by Claude Arpi at 5:41 AM