A Chinese train to the Indian Border (updated) 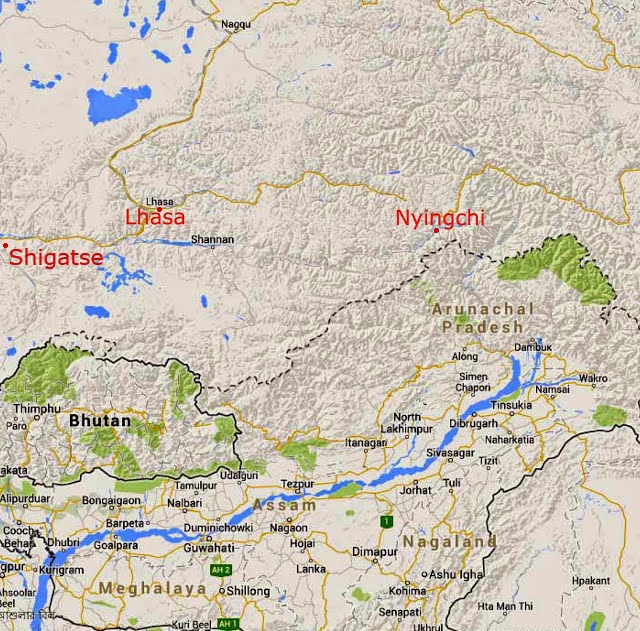 Yesterday, Xinhua announced that "China's top economic planning agency has approved plans to build three rail lines, at a cost of about 250 billion yuan (40 billion U.S. dollars)."
According to the National Development and Reform Commission, the construction of the longest line, (costing some 20 billion yuan), will carry coal on 1,800 km from the city of Ordos in Inner Mongolia to Ji'an in the eastern province of Jiangxi. It will take five years to complete.
Another project is a 137 km passenger line linking Datong in north China's Shanxi Province with Zhangjiakou in neighboring Hebei.
And finally, but it is not news, it is only a confirmation: a 402 km linking Shigatse (via Lhasa?) to Nyingchi, north of Arunachal Pradesh.
Xinhua says: "Policymakers have been accelerating investment in infrastructure to stabilize growth in recent months."
Xinhua later reported: "According to the plan approved by the National Development and Reform Commission, the Lhasa to Nyingchi section of the Sichuan-Tibet railway runs 402 km from Nyingchi to Xierong, a stop on the Lhasa-Shigatse line. The 32-km section from Xierong [near Lhasa-Gongkar airport] to Lhasa will be electrified."
Xinhua provides further details about this most strategic new railway line to Arunachal border.
The Tibet project will cost 36.6 billion yuan (6 billion US dollars) and take seven years to complete (2021). The state-owned China Railway Corporation will the builder and operator.
The line is designed for a speed of 160 km per hour for passenger trains.
The cargo capacity will be 10 million tonnes per year.
Yang Yulin, a Tibet railway official told Xinhua: "The Lhasa to Nyingchi railway section is conducive to improving the regional road network and transportation capacity to better integrate Tibet with other parts of China."
Wang Daiyuan of the Tibet Academy of Social Sciences asserted that after completion "the Sichuan-Tibet railway will form a ring with the Qinghai-Tibet railway, which will bring more economic benefit."
A ring around India's frontiers?
Of course, the Chinese authorities only emphasized the development of tourism.
Quoting Wang, Xinhua says: "Transport has long been a bottleneck for tourism in Tibet. More tourists will be able to visit Tibet via the Sichuan-Tibet railway."
Tourist arrivals in Tibet reached 12.9 million in 2103 from 1.8 million in 2005. Tibet's gross domestic product reached 80 billion yuan in 2013, compared with 34 billion yuan in 2006.
The new railway line is part of a network linking Lhasa to the borders of India and Nepal. It will connect Lhasa, Shigatse with Kyirong, Yatung (Sikkim border), Jilung (near Mt. Everest) and Nyalam (near Dram border port with Nepal).
The next stage will probably be a railway line through the Aksai Chin linking Tibet (Lhasa) to Xinjiang (Kashar and Urumchi).
Though it has not been announced as yet, it is bound to happen.

In January 2014, I already mentioned the project on this blog. I wrote:

It is most strategic move of the year.
China has officially announced that the construction of the Lhasa-Nyingchi [or Nyingtri] railway line, will start in 2014.
For India, it is an extremely serious (though expected) development.
Indian Army Chief Bikram Singh has just admitted 'inadequacy' in the roads and rail infrastructure along the borders with China, while assuring the Indian public that "the government is working to build the facilities there and had identified projects".
During his press conference, General Singh stated : "Only last year, the Centre had allocated Rs 9,200 crore for infrastructure along the borders with China and a Cabinet Committee on Security note had been prepared for another Rs 28,000-crore worth of projects for the 12th and the 13th Five-year Plans".
Too little, too late to counter China which will bring the train near its border with India, north of the McMahon line.
I earlier wrote about Bayi, 'The Main Military Hub in Tibet'.
Today, Xinhua says:


A new railway connecting Lhasa and its southeastern neighbor Nyingchi [Nyingtri] Prefecture is going to be built in 2014, according to Losang Jamcan, [Lobsang Gyaltsen] chairman of the Tibet Autonomous Region, on Jan. 10, 2014.
Losang Jamcan made the announcement during the government work report in the second session of the 10th Tibet Committee of the Chinese People's Political Consultative Conference in Lhasa, from Jan. 8 to Jan. 12.
Project of the Lhasa-Nyingchi Railway is now at the feasibility study stage with two designs going southward and northward under discussion.
The Lhasa-Nyingchi Railway marks the second extension of the Qinghai-Tibet Railway, following the Lhasa-Shigatse Railway terminating at Shigatse, the second largest city in Tibet.
The two railways of equal importance will present different views with regard to their different geographical and climate conditions, according to Losang Jamcan.