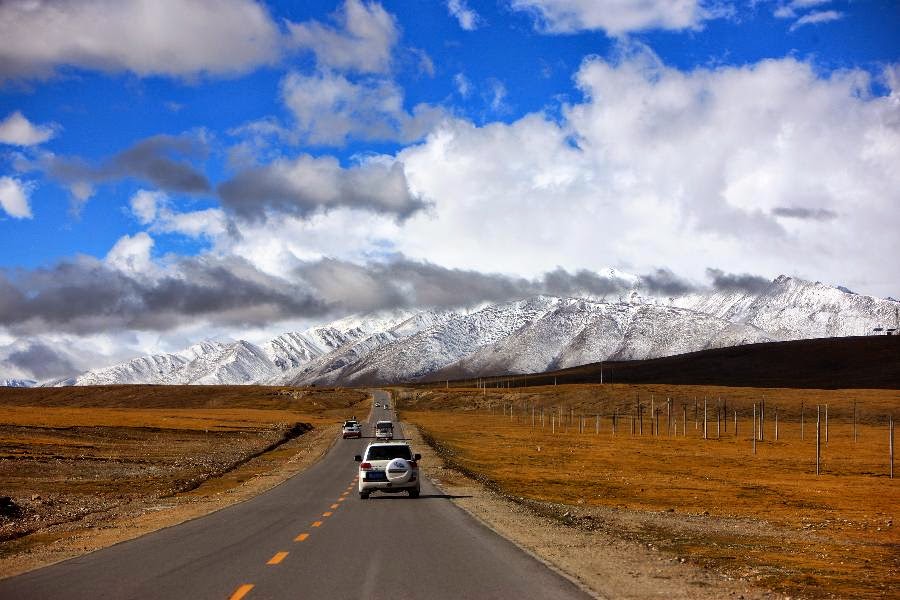 Yang Chuantang is an important member of 18th CPC's Central Committee and Minister of Transport of China.
I am reproducing below his interview published by China Tibet Online.
It is entitled Tibet’s transportation roadmap: Transport Minister.
Yang Chuantang, a native of Yucheng, Shandong province, knows Tibet very well. Yang was first posted in Tibet in 1993; he then held the position of administrative vice-chairman of the Tibet Autonomous Region's (TAR) Government.
He was later elected vice-governor of Qinghai province in 2003; in 2004, he returned to the TAR and became secretary of the CPC's Tibet autonomous regional committee (in other words, Party boss).
Yang Chuantang served as Vice-Chairman of the State Ethnic Affairs Commission from 2006 to 2011 and in 2013, the old Tibet-hand became China's Transport Minister.
Last months, I already wrote about the road network on the Tibetan plateau.
What is interesting in the interview is the mention of the Fifth Tibet Work Forum held in January 2010. The Forum usually decides China's Tibet policy for the next decade.
Regarding transportation, five points were made:
Of course, a crucial objective, the strategic and military one, is not mentioned in the interview.  This gives a tremendous advantage to China vis-a-vis India particularly in the border areas (opposite India).

More on transportation on the high plateau
Yesterday Xinhua announced that "China's vast and fast-growing high-speed rail network will extend into the Qinghai-Tibet Plateau as a route linking Xinjiang with inland is scheduled to start running through Qinghai Province next month. ...The train will run at a speed from 200 km/h to 250 km/h on the plateau, reducing the travel time between Qinghai capital Xining and Gansu capital Lanzhou to one hour. After the operation starts, it will only take seven hours for a train to run from Xining to Urumqi, capital of Xinjiang Uygur Autonomous Region."
Chao Yang, chief engineer of the Qinghai division explained: "It marks China has mastered technologies of making and operating high-speed trains in areas of high-altitude and extreme low temperature."
Xinhua added: "The high-speed rail is expected to spur the growth of tourism, mining and trade on the Qinghai-Tibet Plateau."
And it will tremendously enhanced the military infrastructure!

Editor’s note: Chinese President Xi Jinping called on people to promote the "spirit of the Qinghai-Tibet Highway and the 'Sichuan-Tibet Highway in August. What roles have these two highways played in the development of Tibet’s transportation today? What measures have the Tibet Transport Department adopted to ensure the smooth operation of these two highways? And what support will the central authority and local departments concerned provide for the development of Tibet’s transportation system? In a joint interview by xinhuanet, people.com.cn and chinanews.net, Yang Chuantang, China's Minister of Transportation expressed his views as follows:

The roles of 'Two Highways'
The Qinghai-Tibet Highway and the Sichuan-Tibet Highway were constructed under harsh natural conditions over five years, which is a miracle in the history of highway construction on the 'Roof of the world'. The opening of the two highways has ended the days when there was no highway in Tibet, and has also changed Tibet’s traditional mode of travel and created a new epoch in the course of transportation in modern times.
For some time now, 95 percent of aid goods have been shipped to Tibet via the highways. On top of this, supplies for 105 key projects, equipment for quake relief, and construction materials for the Qinghai-Tibet Railway have also been transported into Tibet through the highways.
In terms of construction, the Qinghai-Tibet and Sichuan-Tibet highways were the most difficult, complex, and challenging of the time. How to maintain smooth transportation along them is also a hard nut to crack.
The past six decades have seen rapidly improving developments in Tibet’s transportation system. By the end of 2013, the total mileage of Tibet’s highway had reached 70,000 kilometers, with 20 national and regional routes, 71 roads, and many rural roads with Lhasa as their center. These new roads and highways form a network covering three economic zones in the central, eastern and western parts of Tibet. Besides, there are five airports of civil aviation in Tibet, with 48 domestic and international airlines reaching as far as Beijing, Chengdu, Hong Kong and Kathmandu as well as another 25 cities. The first extension of the Qinghai-Tibet Railway from Lhasa to Shigatse was completed and put into operation in August this year.

Next steps
The past two decades have seen huge developments in Tibet’s transportation system. However, Tibet’s transportation still lags behind when compared to that the national average level.
A general guideline was put forward at the Fifth Conference on the Work of Tibet in 2010 that transportation should be developed first in order to fulfill the goal of building a society of moderate prosperity in all aspects by 2020.
Therefore, new concepts and models should be adopted to improve the efficiency of development, for which the following plan was devised:
First, a reform in investment and financing mechanisms will be conducted.
Second, a fast and comprehensive transportation network covering Lhasa and six prefectures will be set up, and a plan based on the comparative advantage of each means of transportation will be made.
Third, infrastructure construction and maintenance will be supported continuously. In the 13th Five-year Plan period (2016-2020), heavier investment will be made in the building and maintenance of highways for national defense, national and regional highways, and rural roads. Management on the maintenance of these roads will also be strengthened, and the capacity for emergency response will be improved.
Fourth, a public information platform will be set up because highways are the most important means of transport in Tibet for tourism, cargo and passenger transport. Transport infrastructure at border ports will also be improved.
Fifth, better transportation facilities will be provided to support the national aid campaign for Tibet in matters of finance, cadres, personnel, education, science and technology, and management.
Tibet will also coordinate with the national departments concerned for more funds, technical support and experts for the future development of its transportation system.
Posted by Claude Arpi at 7:56 AM