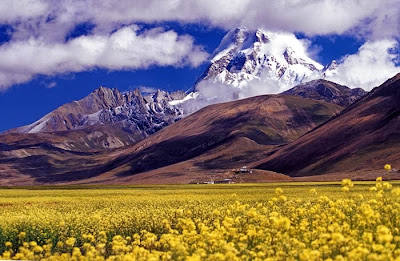 Chen Guanguo, the Communist Party Secretary in Tibet affirmed he will protect Tibet 'last piece of pure land on earth'.
According to China Tibet Online, Chen affirmed “Tibet will take environmental protection as the bottom line, lifeline.”
What does this mean?
For Chen, the time has come “to ban the projects with big energy consumption, high emission and serious pollution [and] implement the exclusive approval mechanism of projects related to mineral resources development.”
The Party boss speaks of “one-vote veto mechanism in order to protect the ecological condition on the plateau.”
Lobsang Gyaltsen, chairman of the Tibetan Autonomous Region’s (TAR) Government confirmed that “Tibet would never introduce energy-consuming processing lines or products with high pollution and emission in its economic development, nor erode vast area of land, pollute drinking water, rivers or groundwater, nor cause any severe ecological disaster by any human action.”
That sounds good.
China Tibet Online reminds its readers that Tibet, The Third Pole is the waterhead of South Asia and Southeast Asia, as well as the ‘regulator’ of the climate of the Mainland 'as well as the eastern hemisphere at large'.
The Chinese site, quoting the Environment Report 2012 asserts that "the water, air and soil has been kept intact in the whole region, and most of the areas have been in their state of nature with no accidents ever occurred due to major pollution. Up to now, Tibet remains one of the areas with the best environment on the globe".
The Government in Lhasa conveniently forgets the wild mining projects.
The Department of Environmental Protection of the Tibet Autonomous Region mentions that by the end of 2012, 47 nature reserves have been set up with the total area of 412,200 square kilometers, taking up 34.35 percent of the whole region, which ranks the first in the entire China.
The Nyingchi Prefecture, north of the Indian border (Arunachal) “has been noted for its natural environment as beautiful as that in Switzerland and, and some of its villages or small towns have become hot tourists spots home and abroad, which have brought about economic returns for the local farmers”, says the China Tibet Online. 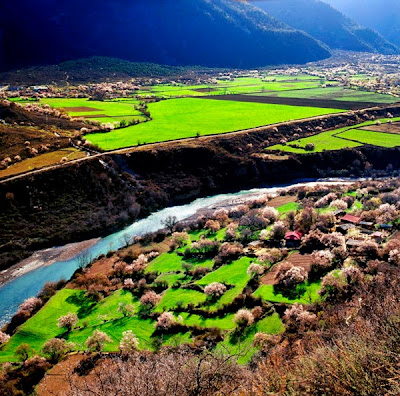 Apparently, the TART government follows the principle of "development in protection and protection in development" and projects have to go through an approval mechanism before being implemented.
Chen gave the assurance that during the next five years, “Tibet will beef up its efforts in building up an ecological safety barrier to make it an eco-friendly, economically advanced and livable home to its residents.”
Obviously, everything is relative and compared to other areas in China, Tibet is much better off.

Compared to Beijing
Emily Brill wrote an interesting piece in The Atlantic.
She explains: “When I moved to Beijing from New York in February to study Chinese, a question began to haunt me: Could Beijing’s air in 2013 be more dangerous than the toxic brew produced by the 9/11 attacks on New York City’s World Trade Center, which hung over Lower Manhattan for months, sickening thousands of firefighters, recovery workers, and ordinary New York residents?”
She remarked: “Every morning, I would wake up in my apartment in central Beijing barely able to see the buildings across the street. Then, I would check online for postings from the U.S. Embassy in Beijing, which uses a device on its roof to measure air quality each hour of the day. Despite intensifying media coverage of Beijing’s bad air—especially around the “airpocalypse” in January, when pollution levels in Beijing climbed well above the United States Environmental Protection Agency’s (EPA) upper threshold for air that is hazardous even to healthy adults—I often found myself at pains to express to friends just how alarmed I was by the air outside my window. My friends in the U.S. could not seem to fathom it and my Beijing friends seemed used to it, even numb. As a native New Yorker, in addition to being the life-changing tragedy and wake-up call that it was for every American, 9/11 was what I considered the worst air pollution disaster of my lifetime. Could that experience help put the severity of Beijing’s air pollution into comparative perspective?”
Well, Tibet is certainly better than Beijing and other large metropolises in China, but despite Mr. Chen’s promises, will it remain so?
Fifteen millions of tourists every year are a polluting factor. Uttarakhand has recently tragically discovered that eco- or religious tourism can be destructive simply because it means more roads, more hotels, more dams to provide comfort to the visitors who ‘consume’ more during their holidays, and this in a fragile environment.
And what about the mineral wealth of Tibet, is Mr. Chen going to stop legal and illegal mining?
And the dams on the Yarlung Tsangpo and other rivers, will Mr. Chen stop their construction?
It is doubtful. In the years to come, Tibet will probably catch up very fast with Beijing and other mainland cities.
In the meantime, Beijing has decided to reduce levels of atmospheric pollutants in Beijing by as much as 25 % to try to improve the air quality in the Chinese capital.
In a policy document, the State Council promised that “concentrations of fine particles” in Beijing’s air will fall by “approximately 25 %” from 2012 levels by 2017, while other cities including Shanghai will see reductions of between 10 and 20 % from 2012 levels over the same period.
Let us hope for the best, but wild development usually does not rhyme with ‘safe air’ and 'nature paradise'.
Posted by Claude Arpi at 7:29 AM