A Dalai Lama popular in China 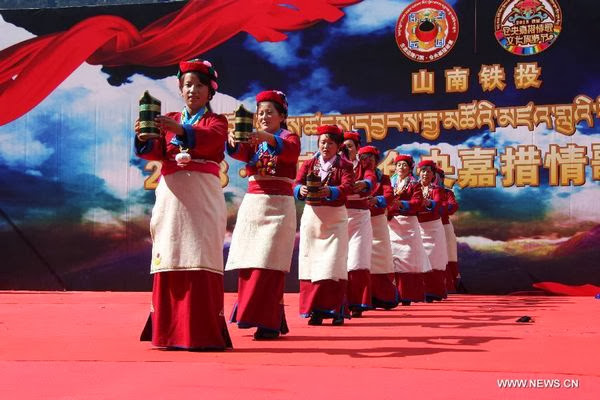 Last year, I mentioned the extraordinary life of the ‘Indian Dalai Lama’, Tsangyang Gyatso, the Sixth Dalai Lama born in 1643, near Tawang in Arunachal Pradesh.
As a young boy, before leaving for Lhasa, he lived in a small hamlet called Urgyeling, a few kilometers south of Tawang town.
Tsangyang Gyatso was in many ways an exceptional Dalai Lama. As a teenager, he was taken away to Tsona, the main monastery on the other side of the Tibet border (McMahon Line), where he was kept for 8 years under the tight surveillance of the local Tsonpon or Governor (the Regent Sangye Gyatso had not yet revealed to anybody his real identity). He was already an adolescent when he finally left for Nagartse near Lhasa where his Guru, the Second Panchen Lama enthroned him as the Sixth Dalai Lama.
His exquisite poetry is known today by all Tibetans and Monpas and is still sang during long evenings around a fire after a few cups of chang
You may think the Chinese, as believers of Karl Marx atheist religion, do not have a great love for the Dalai Lamas; it seems logical. Further their propaganda machinery loves to bash the present Dalai Lama.
But recently the Communist leadership has ‘rediscovered’, the Sixth Dalai Lama and started organizing Festivals in his name.
Chinanews.com reported that the Tsangyang Gyatso Ballad Cultural Tourism Festival was held in Tibet from September 15 to 19, in Legpo of Tsona County in Lhoka Prefecture. Tsona is just north of the McMahon Line.
The main purpose of this Festival is to show to thousands of Chinese tourists that Tawang is also part of China and whatever belongs to Tawang, also belongs to China.
Budo, a deputy secretary of Tsona County Communist Party Committee, told the media: “Since the 12th Five-Year Plan was carried out, the economy and culture undertakings of Tsona County have grown by leaps and bounds. The total output value and annual per capita income of four Monpa ethnic townships have increased by 95% and 63% respectively. By the end of 2012, the per capita income of farmers and herdsmen in Legpo had reached 6,424 yuan ( 1,050 dollars), higher than the regional average level.”
To raise the revenue further, Tsona County “is committed to inheriting and promoting the traditional Monpa culture and Tsangyang Gyatso ballads.”
I am not sure what ‘committed in inheriting’ means, but the Communist authorities has stated that they would like the Tsangyang Gyatso Ballad Cultural Tourism Festival to gradually develop “into a grand local gathering integrating art performances, tourism promotion and business negotiation”.
The 1st Tsangyang Gyatso Ballad Cultural Tourism Festival was held in May 2012. The marketing propaganda for the 2nd Festival explains that the area is “centered around magical valley and poetic countryside, beautiful township of Monpa flavor and a holy land of love. It has been widely hailed for offering tourists the simplest folk customs and purest ecological environment.”
Besides the ‘political’ aspect of the festival, the organizers look for tourism promotion, business negotiation and commodity exhibition (sic). Cultural performances with popular ballads and songs are organized as well as “intangible cultural heritage items such as Monpa Akyi Lhamo and Dringking song of Sarma”. The visitors get a bonus by practicing ‘shooting arrows and hitting ox horns’, and sightseeing tours take the vacationers to various scenic spots: “With the clement climate and fertile land, Legpo is celebrated for its snow mountains, sea of clouds, dense forest and magnificent waterfall.”

The Chinese authorities also announced that the National Intangible Cultural Heritage ‘Mepa Akyi Lhamo’ and Tibet regional Intangible Cultural Heritage ‘Sarma oenopoetic ballad’ (one of the oldest historical singing performances handed down from ancient times, according to Chinese media, though etymologically it looks as a reference to wine drinking or making or both) performed on the festival. It was reported that the total number of ‘Mepa Akyi Lhamo’ inheritors has reached 16, while ‘Sarma oenopoetic ballad’ only has one inheritor who is an old man in his seventies. This festival is expected to rescue and protect these intangible cultural heritages, according to the Chinese media which explains to the visitors: “In 1683, Tsangyang Gyatso was born in a traditional Monpa family in Tsona. Monpa people are renowned for their singing and dancing down the ages.”
During the festival, the organizers also arrange the visit Tsangyang Gyatso's former residence (after he had left Urgyeling) “while discovering how he grew up, tourists could also learn Monpa people's folk culture, such as daily life, dress as well as vernacular architecture”.
What is happening on the other side of the border, in the Indian district of Tawang?
Despite the Tawang Festival being organized in October, the poor state of the roads and the irregular helicopter’s schedule hamper the Indian and foreign visitors to see the true birth place of Tsangyang Gyatso.
What a pity?
Posted by Claude Arpi at 10:42 AM