In Bhutan too, Chinese grab land

On August 9, Kuensel, a Bhutanese publication, reported that the Indian National Security Advisor (NSA) Shivshankar Menon arrived in Thimbu to ‘congratulate the new Prime Minister Tshering Tobgay on assuming the office’.
Menon wanted also to commend Tobgay for Bhutan’s successful transition to democracy.
During their meeting which followed, the Bhutanese Prime Minister thanked Menon for visiting Bhutan at this critical time; he expressed his gratitude to Dr. Manmohan Singh, who had assured Bhutan of India’s continued assistance in the implementation of its 11th Plan and its Economic Stimulus Plan.
Tobgay explained to the NSA that the 11th plan was inadequate to address the country’s current economic situation; therefore the newly elected government had to prepare a ‘stimulus plan’ to increase liquidity schemes in banks which would allow loan provisions for private sectors and enhance youth employment.
According to Kuensel: “Lyonchhoen [Prime Minister] said these issues required immediate attention and the present government called for Indian Government’s assistance and support to ensure these issues were carefully and effectively addressed.”
“We’ll do everything we can to support and provide assistance to Bhutan. We really look forward to working together and achieving positive outcomes,” answered Shivshankar Menon, who was accompanied, oh surprise, by the new Indian Foreign Secretary, Ms Sujatha Singh.
Why this ‘double’ visit?
The NSA does not usually travel with the Foreign Secretary.
There was certainly more than the 11th Plan to be discussed.
Though the Indian Foreign Secretary could have traveled alone to Bhutan, she took along her senior colleague and former foreign Secretary, Shivshankar Menon. It soon become clear that the NSA’s main purpose was to advise the Bhutanese government on how to handle the border talks with China.
The 21st round of boundary talks between Bhutan’s foreign minister Rinzim Dorje and the Chinese vice-minister in the Ministry of Foreign Affairs were to be held on August 22.
The New India Express speaks of “a shift in emphasis from the disputed north-western, close to Siliguri corridor, to the central parts of Bhutan,” this made Delhi nervous.
These border talks have indeed serious strategic implications for India’s security and Delhi’s own negotiations with China probably needed to be ‘synchronized' with Thimpu.
The New Indian Express asserted: “According to sources, NSA spoke to his interlocutors about the current status of the India-China border talks. But, with the political leadership in Bhutan being brand-new, Menon took the opportunity of the Foreign Secretary’s visit to share Indian ‘experience’ and knowledge of Chinese negotiation tactics to advice Thimpu on the way forward.”
Menon’s visit had also nothing to do with the fuel subsidy cut imposed by India during the last days of legislative election campaign; New Delhi had already said that it as a bureaucratic lapse.
Delhi was just nervous since Thimbu apparently had decided during a previous round of talks with China to have a joint technical field survey in one of the disputed areas, Pasamlung in central sector.
Another claim by China, the Doklam plateau is adjacent to the hyper-strategic Chumbi valley. That is the real nightmare for India. 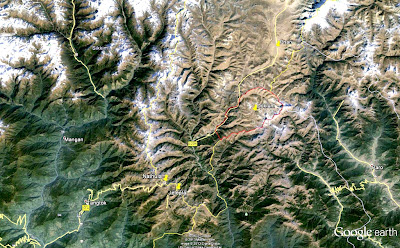 On the opposite side, China never liked the India’s monopoly over Bhutan’s foreign affairs. Liu Zengyi, a research fellow at Shanghai Institutes for International Studies wrote in The Global Times, "New Delhi sees Bhutan as little more than potential protectorate".
Referring to China's attempts to establish diplomatic relations with Bhutan, the scholar explained: “India won't allow Bhutan to freely engage in diplomacy with China and solve the border issue, …Besides, India will continue its stance on the Sino-Indian border dispute and strengthen its strategic posture”.
The article alleged that Indian ambassador to Bhutan VP Haran followed a ‘carrot-and-stick’ policy and ‘played a big role’ in the victory of the opposition Peace and Democratic Party (PDP) over the Druk Phuensum Tshogpa (DPT): “Critics stated that the timing of India's subsidy withdrawal suggested it wanted to influence Bhutan's election results. Why did India, which is proud of being the largest democratic country in the world, venture to interfere in Bhutan's elections?”
The Global Times’ article acknowledges that for India, China’s advances in the Doklam area is a strategic threat to the Siliguri corridor: “As a country located between China and India, Bhutan serves as a buffer and is of critical strategic importance to the Siliguri corridor, a narrow stretch of land (known as chicken's neck) that connects India's northeastern states to the rest of India. …The corridor is considered a vulnerable bottleneck for India's national security. Delhi worries that China will send troops to the corridor if a China-Indian military clash breaks out.”
It is indeed a serious issue for India.
Though India’s influence over Bhutan is acknowledged by China, New Delhi is keen to keep an eye on the Sino-Bhutanese negotiations, which would definitively have repercussions on the Sino-Indian talks. Though China and Bhutan do not have direct diplomatic relations, last year Jigme Thinley, the then Bhutanese PM met on the sidelines of a United Nations summit in Rio with Chinese premier Wen Jiabao.
A note of the Library of Congress give a background of the Sino-Bhutanese relations: “Tension was renewed during the 1962 Sino-Indian border war when the Chinese army outflanked Indian troops, who, with permission of Bhutanese authorities, retreated through southeastern Bhutan. More fearful of China than confident of India's ability to defend it, Bhutan formally maintained a policy of neutrality while quietly expanding its relations with India. Cross-border incursions by Chinese soldiers and Tibetan herders occurred in 1966, but tensions generally lessened thereafter and during the 1970s.”
In 1979, after Thimphu and New Delhi protested against regular intrusions by Tibetan herders into Bhutan, Beijing ignored the Indian protest, responding to the Bhutanese complain only.
In 1998, China signed a peace agreement with Bhutan to “maintain peace and tranquility on the Bhutan-China border areas.” The Bhutanese were happy because Beijing admitted: “China fully respects the territorial integrity and independence of Bhutan”.
In 1996, China has already offered a package deal to Bhutan: Beijing was ready to renounce its claim over the 495 sq. kms of disputed land in the Pasamlung and Jakarlung valleys in exchange for a smaller track of disputed land measuring a total of 269 sq. kms, the Doklam Plateau located in the Northwestern part of Haa District. This is, by the way, the new Bhutanese PM Tshering Tobgay’s constituency.
The problem is that the Doklam Plateau is close to India’s ‘chicken neck’ area (The Chumbi Valley) and the Siliguri corridor connecting the Northeast to the rest of the country.
A Bhutanese blogger wrote: “Any talk of ceding the Doklam Plateau to China causes feverish nightmares to India. That is why, when India learnt that China was sending a delegation to Bhutan for the 21st round of border talks, India promptly rushed their National Security Advisor Mr. Shivshangkar Menon to ‘brief’ the ‘brand-new’ Bhutanese government and to ‘share Indian experience and knowledge of Chinese negotiation tactics to advice Thimphu on the way forward’.
Another issue is Bhutanese susceptibilities. The blogger adds: “That is a whole lot of hogwash. India knows that the border talks will not be conducted or influenced by the new government team but by a select group of Bhutanese negotiators who have knowledge of the issues involved and who were part of past negotiations. Mr. Menon should not have bothered - he could have simply called up our government from the comfort of his office in New Delhi and categorically stated the Indian security concerns - Bhutan would have been happy - as in the past three decades - to do their bidding.”
Many in Bhutan believe that “This is clearly a case of being caught between a rock and a hard place.”
The same Bhutanese writes: “the possibility that Bhutan may be considering ceding the Doklam Plateau to China - drives India completely berserk!”
Just a look at a map makes it clear why.
It is clear that the claim on the Doklam Plateau is a second thought for China. In a ‘Note given by the Ministry of Foreign Affairs of China to the Embassy of India in China’ on December 26, 1959, the Chinese Ministry affirmed: “With regard to Bhutan and Sikkim, some explanation may be given in passing. China has no other intentions than that of living with them in friendship without committing aggression against each other. Concerning the boundary between China and Bhutan, there is only a certain discrepancy between the delineation on the maps of the two sides in the sector south of the so-called McMahon Line.” 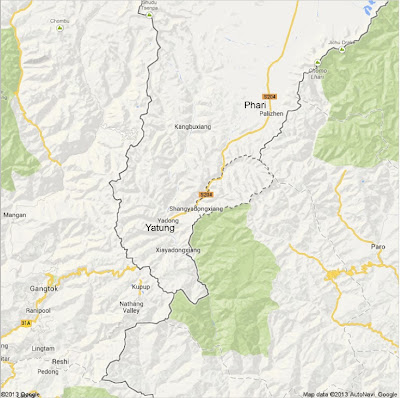 In 1959, there was no discrepancy between the Chinese and Bhutanese maps (except for eastern Bhutan where Beijing did not recognize the McMahon Line).
The 1959 note adds: “But it has always been tranquil along the border between the two countries. The boundary between China and Sikkim has long been formally delimited and there is neither any discrepancy between the maps nor any disputes in practice. All allegations that China wants to encroach on Bhutan and Sikkim, just like the allegations that China wants to commit aggression against India and other southwestern neighbouring countries, are sheer nonsense. The basic stand of the Chinese Government towards its neighbours has long been defined time and again and there should have been no need to deal with it at length. It is, however, unfortunate that recently, particularly since the putting down of the rebellion of the reactionary serf-owners in the Tibet region of China, India has in various ways distorted and attacked the Chinese attitude. In the interest of friendship of the two countries, the Chinese Government does not wish to answer attack with attack, but would rather assume that the Indian Government really has some misunderstandings about China's intentions. …'The strength of a horse is known by the distance travelled, and the heart of a man is seen with the passage of time.' China's peaceful and friendly attitude toward India will stand the test of time. The Chinese Government is convinced that, though the truth of a matter may be hidden for a while, it is impossible to hide it up for long.”
Well, the ‘passage of time’ has shown that China was an unreliable horse, not only the PLA has intruded in several areas during the recent years, but has also built important infrastructure, such as the road from Yatung to Phari in the Chumbi Valley which cuts across the Doklam Plateau.
The Chinese engineers have also built traversal roads and set up a communication network within the disputed area.
How to dislodge the Chinese is not an easy issue.
In the meantime, it is a fact the security of the Siliguri corridor has been and is one of India's most vital objectives since independence.
By grabbing the Doklam Plateau, Beijing considerably enlarged the Chumbi valley and its access to Sikkim and Siliguri.
Posted by Claude Arpi at 6:38 AM

Sir There is a slight problem. The map showing DOKLAM in bhutan is not correct. It is sinchulumpa, giu and Dramana area. Doklam is mush below, near the tri junction, beleow sinchela. Please correct it. Thanks