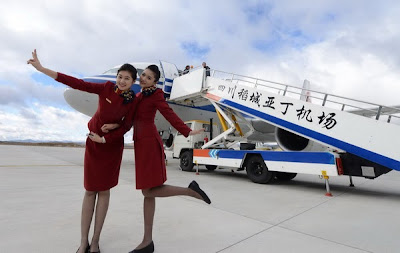 Two more on airports on the Tibetan plateau!
I have already written about the 6 main airfields in the Tibetan Autonomous Region and more recently on one in Labrang (Gansu).
According to Xinhua, the construction of a new airport to serve Dawu Township, capital of Golog (Golok) Tibetan Autonomous Prefecture (TAP) in Qinghai Province will begin later this year.
The State Council, China's Cabinet has recently approved the project. Local airport sources explain that it will boost the development of the Tibetan-populated prefecture.
For Beijing, it will also help control the 'restiveness' of the Tibetans in the area.
Qinghai Airport Co Ltd., the promoter stated that the airport will be completed by 2016. The airport will be located at an altitude of 3,780 meters and will require an investment of US $ 184 million.
Some 80,000 passengers (and 200 tons of cargo) are expected to use the new facilities every year. Airbus 319 and Boeing 737-700 aircrafts will be able to land at Dawu airport.
Xinhua says that the area known as Golog “covers 76,000 square km on the Qinghai-Tibetan Plateau and has a population of 180,000 -- mostly herders. The topography of the region, with an average elevation of 4,200 meters, is dominated by daunting snow-capped mountains and sprawling meadowland.”
But there is more than the Chinese news agency tells us.
Dawu is considered by the Chinese government one of the most 'unstable' areas of the Tibetan plateau.
Dawu in Golog country should not be mixed with Dawu in Kartse TAP, Sichuan Province which witnessed serious disturbances on July 6 after a large number of Tibetans decided to celebrate the Dalai Lama’s birthday. 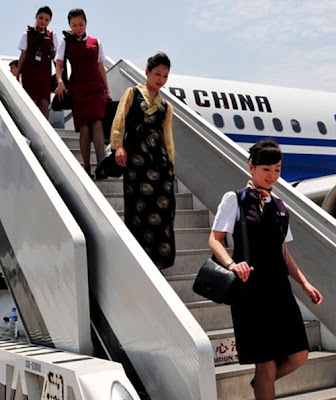 According to Xinhua again, the Daocheng Yading airport, located in Daocheng County, Kardze TAP of Sichuan Province is expected to start operating on September 16. It will be the world's highest-altitude civilian airport, say the local tourism authorities.
The Chinese news agency affirms that it will cut the traffic time between the Mainland and Chengdu, Sichuan’s capital from two days by bus to 65 minutes by plane.
Located at 4,411 meters above sea level, the airport will initially operate a daily flight from Chengdu to Daocheng; a one-way ticket will cost 260 US $.
The new airport Jiuzhaigou-Huanglong is 159 km from Yading Nature Reserve in the eastern part of the Qinghai-Tibetan Plateau. Yading is known as ‘the last Shangri-La’ and ‘the last pure land on the blue planet’.
A month later, new flights will start; one connecting Kardze to Chongqing, but also one to Barkam, the capital of Ngawa TAP, which is bordered by Gansu in the north and northeast and Qinghai in the northwest . 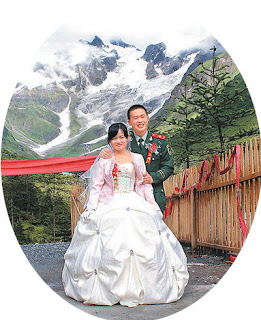 A few words about Ngawa’s Jiuhuang (Jiuzhaigou-Huanglong) airport: it is located 12 kilometers north of the Chuanzhusi Town, Songpan County. The airport is 88 kilometers from Jiuzhaigou Scenic Area, and 43 kilometers from Huanglong, another touristic area. Air distance from Jiuhuang Airport to Chengdu Shuangliu International Airport is about 240 kilometers, a 40 minutes' flight.
There are dozens of flights daily from Jiuzhaigou to Chengdu.
The Jiuzhaigou-Huanglong airport was opened in 2003 with flights to Beijing, Shanghai, Guangzhou, Chengdu, Kunming, Chongqing and Xi'an.
The Ngawa area has witnessed a wave of self-immolations in 2011 and 2012; about half of the Tibetan self-immolations occurred in Ngawa Prefecture.
China will soon have a string of airports to bring reinforcements in case of 'troubles' in these areas of former Amdo and Kham provinces.
In peacetime, Chinese tourists can visit these 'paradises on earth' or even get married there.

The Metok tunnel and road
Another piece of news regarding the infrastructure in Tibet: the tunnel to Metok, north of the McMahon Line seems now fully functional.
According to China Military Online, a ‘motorcade’ regiment under the Sichuan-Tibet Military Service Station Department left for Motuo [Metok] county in the southeastern part of the Tibet Autonomous Region on September 10, 2013.
The PLA’s website affirms that this is the first time that the PLA sent “motorcades for delivering materials to Metok county”. It further explains that Metok, hailed as the ‘isolated island on plateau', was the only county in China which could not be reached by car. I mentioned several times the opening of the tunnel on this blog in December 2010/January 2011. 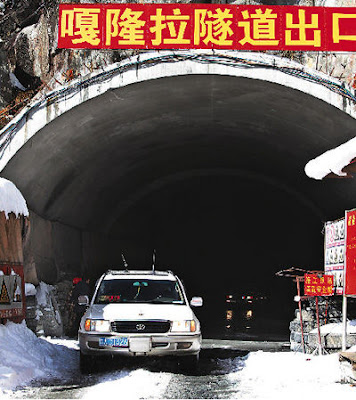 China Military Online admits that in the past “supplies for the military troops stationed in Metok relied on horsebacks and occasional helilifts. In October 2012, the highway connecting Zhamu town of Bomi county and Metok county was officially put into use, greatly facilitating transport to Metok.”
That is not good news for the Indian Army posted on the other side of the McMahon line with the poor infrastructure which has lately done the headlines of the Indian media.
Pang Kuo, director of the Sichuan-Tibet Military Service Station Department explained to the PLA website: “It used to take the ‘hinny fleet’ more than two months to provide enough staple and non-staple food of a year for the stationed officers and men in Metok. Now it takes only one trip of the motorcade to supply enough materials the troops need for a whole winter.”
AK Antony, the Defence Minister was right when he said: "I have no hesitation to say that China is in a better position than India in terms of border infrastructure. It is a mistake, it is all of us who are to be held collectively responsible for it. It is a historical legacy."
Legacy or not, it is a hard fact.
Antony however assures the Houses that: "After 'years of neglect', India is fast developing capabilities near the China border, including building of roads, raising of two mountain Divisions, many new airfields and landing grounds."
It is however not true for places like Chaglagam which recently witnessed serious Chinese intrusions.
Mr. Antony conceded that China was 'superior' in terms of border infrastructure as India, "because of 1962 war, India was late in deciding on building roads and other capabilities near the Line of Actual Control."
He explained the increased incursions by Chinese troops over the last few years by 'their fear that India is trying to catch up with them.'
Well, for the time being, China has nothing to 'fear about', but let us India is catching up.
Posted by Claude Arpi at 6:13 AM