Bridge over the River Tsangpo

In an earlier posting, I mentioned that Lobsang Gyaltsen, the chairman of the Tibet Autonomous Region (TAR) promised some Nepali officials visiting Tibet that China would expand a rail service to Nepal, once the train reaches the southern city of Shigatse.
The Nepali delegation had also requested China's help for the construction of a line from Kathmandu to Lumbini, the birthplace of the Buddha near the Indian border.
One step has now been made by crossing the Yarlung Tsangpo (Brahmaputra), near Shigatse.
According to the Chinese media: “The track-laying of the Lhasa-Shigatse railway has spanned the Yarlung Zangbo [Tsangpo] River for the first time on September 24, 2013.” 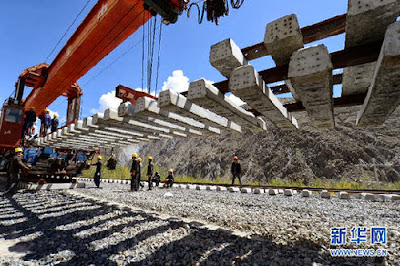 It means that the train will soon reach Shigatse, the capital of Tsang and second largest town in Tibet; then the ‘extension’ to Nepal can begin.
Xinhua explains: “Along with the 32-meter-long T-shaped beam which was put slowly on the pier of the No.1 grand bridge of Lhasa-Shigatse railway over the Yarlung Tsangpo River by the bridge layer, the track-laying of the Lhasa-Shigatse railway has spanned the Yarlung Zangbo River for the first time.”
China prides itself of this ‘iconic’ achievement: “The No.1 grand bridge of Lhasa-Shigatse railway over the Yarlung Tsangpo river is situated in the southwest of Qinghai-Tibet Plateau, …with a total length of 874.25 meters, the grand bridge strides across the river, marking [the completion of] an iconic difficult project of the railway.”
Deng Jinyao, deputy chief engineer of the Construction Headquarters office of Lhasa-Shigatse railway told the Chinese news agency: “Since the construction of grand bridge in May of 2011, thousands of builders have overcome difficulties, such as high altitude anoxia and complex geological conditions, and achieved the established goals after more than 20 months.”
Deng explains that the construction of the No.1 grand bridge was delayed due to the windy weather from October to May, the bridge being located in ‘a large wind gap’. Further, the construction faced the ‘the worst flood in 50 years’.
Deng asserts that the Construction Headquarters office has “conquered many technical difficulties, guaranteeing the smooth construction of grand bridge.”
The Lhasa-Shigatse 253 km long railway started in 2010. The railway passed through one of the canyons of the Yarlung Tsangpo which is nearly 90 km long.
The Lhasa-Shigatse railway, with its 13 stations, will be operational in October 2014. The train, moving at some 120 km an hour, will carry an annual freight of 8.3 million tons. 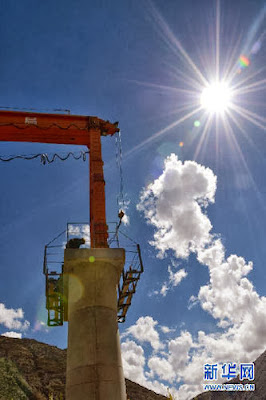 Xinhua has already announced: “After the completion of Lhasa-Shigatse railway, it will further expand the influence region of Qinghai-Tibet railway, improve the transportation of southwest Tibet centered on Shigatse Prefecture, ameliorate the single transportation structure of relying on highway and promote the local economic development.”
In another words, it will bring more tourists and goods to Shigatse, before heading south towards Nepal and east to the Nyingchi Prefecture (north of the Indian border of Arunachal border).
Soon, Nepal will not be anymore an ‘enclave’ country ,depending on India to survive.
This reminds me of an editorial of the bi-monthly publication Mother India published in Mumbai on November 25, 1950. K.D. Sethna, the Editor foresaw:


Let us not blink the fact that Tibet is useful to China principally as a gate of entry to India. Sooner or later the attempt will be made to threaten us. What exactly along the 1300 miles of the new frontier the thrust will come it is too early to say. But Nepal, with sixteen railroads leading directly into India from her borders, appears to be the most likely objective. There may not be direct attack at first, for the Gurkhas are great fighters though their fighting abilities may not weigh against overwhelming number and better equipment. What is more likely is a Communist penetration of the existing popular movements a further working up of internal disturbances dividing the political structure as well the soldiery, and then the call by one party to China for aid.

One Party has already called China in; the Middle Kingdom will be able to send more and more civil and military material 'help’ to the Himalayan State …and perhaps millions of Chinese tourists as a bonus!
For India, it means that 1,439 km will have to be added to the lenght of its border with China.
Posted by Claude Arpi at 7:21 AM