A Chinese Train to Lumbini? 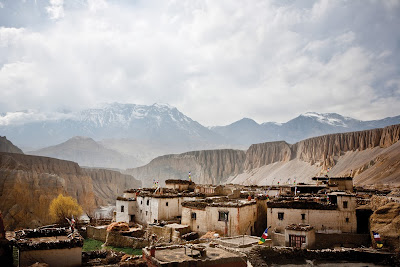 One more instances of  China dictating  the foreign and defence policy of Nepal.
AsiaNews reports that China has asked Nepal to close its military training facilities in the former kingdom of Mustang due to the presence of too many foreigners.
The Nepali training centre which is located in Mustang, close to the border with Tibet, had been the headquarters of the Tibetan guerrilla against Communist China in the 1960s and early 1970s.
According to Asianews: "Beijing is concerned about the presence of officers and soldiers from other countries, and points out that the CIA provided aid to Khampa rebels from this district. Nepal appears ready to accommodate the Chinese, but its army offers alternative solution."
Seven foreign nations are currently trained in mountain warfare the military facilities in Mustang District. Beijing is deeply concerned about the presence of foreign personnel close to its border, pointing out that "several anti-Chinese actions began in the area".
The agency reports that the Nepali authorities appear inclined to listen to Beijing's demands "since China has become the country's most important economic and trading partners".
In 1990, the Nepali Army opened military its facilities to foreign troops and officers, including some from the United States, India and a few  European countries. The objective was to train the troops in a high risk mountainous area. Mustang was 'perfect' for unconventional war games.
But Beijing still remembers the Khampa fighters who from their bases in Mustang attacked the Chinese convoys in Tibet in the 1960s; at that time, the Tibetan freedom-fighters were financed by the Central Intelligence Agency.
Though the Nepali government in Kathmandu appears willing to bend once again to Beijing's demands, it is not the case of the Army.
Defence Minister Atma Ram Pandey 'understood' the Chinese request, he stated: "The presence of foreign troops in such a sensitive area may not be appropriate for our country's security," however, under Nepal's new Constitution, the Army may not to submit to the government's decision.
Army spokesman Jagadis Chandra Pokharel said: "We are aware of the Nepali government's concern and of the strategic importance of the training centre in the area," adding: "We have requested our government not to stop the training but rather monitor the activities of foreigners to ensure that nothing is done against the security of the country."
The pressure of Beijing is bound to mount in the months to come while China will continue to be very 'generous' with Nepal.

A railway line to Lumbini?
According to the Nepali publication,The Republica, Luo Sang Jiang Cun (Chinese name of Lobsang Gyaltsen), chairman of the Tibet Autonomous Region (TAR) assured Nepali officials visiting Tibet that China would expand a rail service to Nepal, once the train reaches the southern city of Shigatse.
Gyaltsen made the commitment during a meeting with the visiting Nepali Chief Secretary, Leela Mani Poudel in Lhasa.
The Nepali delegation had come to participate in the '14th Nepal-China´s Tibet Economic and Trade Fair - 2013' in Shigatse.
The Nepali delegation requested China's help for the construction of a line from Kathmandu to Lumbini, the birthplace of the Buddha near the Indian border.
Quoting Lobsang Gyaltsen, Hari Basyal, the Nepalese Consul General in Lhasa elaborated: "Feasibility study is underway for expanding rail service between Nepal and Tibet. We will immediately commence the process for implementing the plan once railway line reaches Shigatse from Beijing."
Gyaltsen expressed China's commitment "to extend a meaningful support to Nepal for achieving the common goal of socio-economic development."
Chief secretary Poudel asked the Chinese government's help to develop trade infrastructures which are instrumental in promoting bilateral trade.
Later Poudel and Ding Yexian, the executive vice-chairman of TAR inaugurated the Economic and Trade Fair 2013.
Incidentally, Ding Yexian is a Chinese cadre born and educated in Tibet. His father served in the 18th Army in the fifties and later settled in Tibet.
One could say that Ding is Han Tibetan or a Tibetan Han.
Interesting case!
For Nepal, there is no free meal, Poudel had to reiterate Nepal's policy of not allowing anti-China activities in its soil.
What could Poudel do?
He had to request the Chinese officials to increase the economic cooperation in the field of infrastructure development such as dry port facilities and expansion of road and railway networks as well as in crucial sectors of economy such as construction, energy, manufacturing, tourism and agriculture in Nepal.
Ding Yexian said that bilateral trade fairs would be an important forum for enhancing trade and commercial interaction between entrepreneurs of both the countries. He expressed China's willingness to help Nepal for its socio-economic development and emphasized the need for joint efforts to fully operationalize the agreed border points between Nepal and China.
According to the organizers, more than 200 representatives from 70 business enterprises, 36 observer business enterprises, and representatives of Trade and Export Promotion Center are participating from Nepal in the biennial fair. Similarly, around 200 participants from Tibet are showcasing their products in the five-day event.
In the present circumstances, it is doubtful if the training camp in Mustang will remain open for long.
But more worrying for India is a Chinese railway line to Lumbini, a few kilometers from the Indian border.
Posted by Claude Arpi at 7:32 AM

The Fall of Great Wall said...

I actually happy to hear this, however, it seems like something impossible be true, that the forgien soldiers try to revive a tibetan armed struggle??!!

I see in some media report about china concern..it seems ilogical, it might be a chinese fear of obsession from tibetan to resist ther genocide in tibet..I guess in the next months, it will appear if that could be possible or not