My article Asia’s challenge appeared in The Statesman today.

During a visit to Srinagar, Garhwal, in March this year, I was told that a total of 95 hydropower projects were being built or planned on different rivers converging in the Alaknanda and Bhagirathi basin of Uttarakhand.  Why so many dams, I asked? If the Centre does not go for dams and generate power, then Rs 10,000-15,000 crore would have to be annually released by Delhi as Central assistance, I was told. The Centre wants power and the State, hard cash; dams bring a win-win situation, they say. Projects currently underway were supposed to increase the hydropower capacity of the State to 12,235 MW.
Nobody really cared if environmentalists like former IIT professor, Dr GD Agrawal or before him Sunderlal Bahuguna were opposing the wild contagion of concrete infrastructures; they were just labeled as being anti-development by the authorities; ‘development’ being the new God worshiped in the Himalayas.
But the gods are neither crazy nor helpless. They showed it on June 16 and the following days, when torrential rains poured from the sky; the result: several thousands of humans left dead or missing, hundreds of roads cut, villages erased, hydropower plants destroyed, a State totally ruined.
It was predictable and had even been predicted. In 2009, after studying the hydro-electric projects (HEP) in Uttarakhand, a state audit of the Comptroller and Auditor-General admitted that, though most of the projects faced problems associated with land acquisition, forest clearances and enhancement in project capacities “...more grave is the total neglect of environmental concerns, the cumulative impact of which may prove devastating for the natural resources of the State.”
The auditors also remarked: “Negligence of environmental concerns was obvious as the muck generated from excavation and construction activities, was being openly dumped into the rivers contributing to increase in the turbidity of water.”
One visible consequence was seen in Vishnuprayag where the deluge coming down from the upper reaches of Alaknanda completely buried the 400 MWs hydropower plant.
Tragically, the same situation is bound to happen, probably on a larger scale, in Sikkim and Arunachal Pradesh.
What depressed me the most is that many swamis or ‘holy men’ were quite happy with the ‘development’ of their Himalayan environment; their ashrams were getting wealthier and they were getting more followers (they probably thought that it was a win-win situation!)
I was in this frame of mind when I came across a refreshing book written by the 17th Karmapa, Ogyen Trinley Dorje, entitled The Heart Is Noble: Changing the World from the Inside Out. It is obvious that the Karmapa has studied our modern world ‘inside out’. The background of the book is a month-long dialogue between the Lama (called by everyone ‘His Holiness’) and a group of American university students who visited him in May 2011 at the Gyuto Ramoche Monastery in Sidhbari near Dharamsala. It is there that the 29-year old Lama has found a ‘temporary’ refuge, surrounded by the majestic Dhauladhar range as a backdrop.
Though the Karmapa often tells the students (his ‘friends’) that he does not give them a ‘religious’ teaching, the Buddhist themes of ‘temporariness’, ‘interdependence’ or ‘compassion’ pervade the book.
The 12 chapters deal with subjects like ‘Our Shared Ground’; ‘A Meaningful Life: Anything Is Possible’, ‘Healthy Relationships: Orienting Ourselves toward Others’; ‘Gender Identities: It’s All in the Mind’ or ‘Consumerism or Greed: Contentment Is the Best Wealth’. One chapter elaborates on Karmapa’s favorite topic, “Environmental Protection: Cultivating New Feelings for the Earth”.
The young Lama often describes himself as an environmental activist. Born to a nomad family in Kham province of Eastern Tibet, he says that during his youth he experienced a rustic lifestyle which is unfortunately fast disappearing.
The Karmapa asks his visitors to try to realize their intimate dependence with the whole planet. He also sees a close affinity between the concept of ecology and the Buddhist views of interdependence.
His young US friends are warned not to confuse economic success with personal happiness: “Just because we have a market economy, does not mean we need to have a market society.”
In his book, he explains: “In recent years, we have gained a great deal of information about the impact of our actions on the environment. We human beings have tremendous intelligence, but it is clear that there remains a big gap between the brain and the heart. We seem to find it easy to process new information and generate new ideas, yet much harder to produce new feelings. …What we now need to go along with all our powerful new ideas about the environment are powerful new feelings.”
According to him, it is here that our noble heart should intervene. The message of the Karmapa is simple and ‘secular’ -
Page after page, one finds a mature and deep thinker; it is rather rare these days. There is a great lightness in his thought-process, which he is able to share with his young interlocutors.
Karmapa would certain support the Bhutanese ‘Gross National Happiness’ which seems now to have been rejected by the new government in Thimphu. Let us hope that the Land of the Dragon will not take Uttarakhand’s path. It would be such a pity! 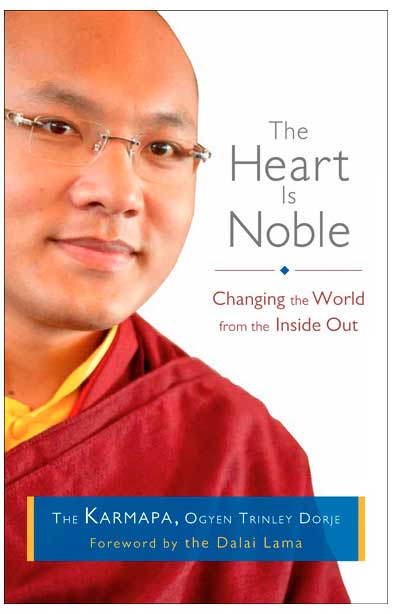 The Karmapa likes to say: “If I have the opportunity, I would most like to restore the natural environment in the Himalayas and Tibet, and to especially protect the forests, the water and wildlife of this region.” His language always remains simple. He encourages his interlocutors by telling them that we, humans are far more powerful than we usually believe: “We individuals can become part of the solution, when we recognize this power and start to use it, together.”
For him, the starting point is ‘inter-dependence with others and the planet’; he believes that if each human being can increase his or her own love and compassion towards others, the planet will face much less conflicts.
In conclusion, he outlines what he calls ‘a kind of humanist spirituality’.
Interestingly, he was the first leader to issue a statement after Bodh Gaya’s recent tragic events. Though he was deeply saddened by the senseless violence perpetrated at the Mahabodhi temple, he appealed for compassion and understanding: “I am convinced that, as Buddhists, in responding to this situation, the best homage we can pay to Lord Buddha is to uphold his teachings on love and ahimsa (non-violence).”
There is no doubt that the most serious issue that Asia will  have  to  face  during  the  coming  decades  is  the  climatic change and the health of the Tibetan glaciers and rivers  which  feed  nearly  2  billion  human  beings.  Asia definitely needs more young, dedicated, intelligent, modern and  open-minded  leaders  like  Karmapa,  if it  wants  to avoid a doomed future.
inside each of us there is a noble heart. He tells the youth: “This heart is the source of our finest aspirations for ourselves and for the world. It fills us with the courage to act on our aspirations. Our nobility may be obscured at times, covered over with small thoughts or blocked by confused and confusing emotions. But a noble heart lies intact within each of us nonetheless, ready to open and be offered to the world.  …When we clear away all that blocks it, this heart can change the world.”
Posted by Claude Arpi at 8:06 AM