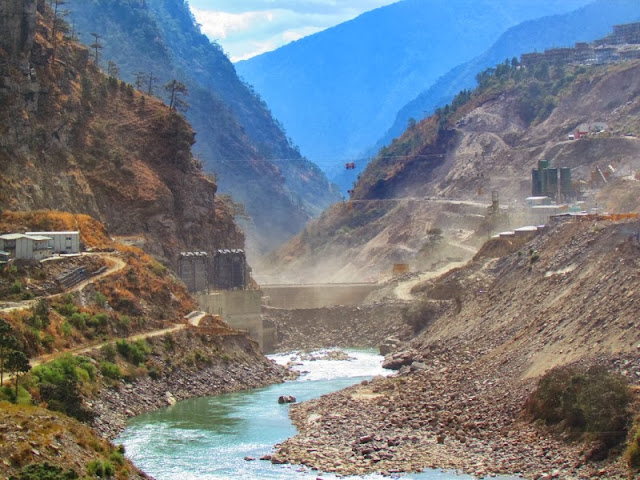 Punatsangchhu-I Hydroelectric Project (PHPA I) is the first stage of an initiative taken by the Royal Government of Bhutan (RGoB) and the Government of India (GoI) in May 2008 to generate 10,000 MW of hydro electricity by 2020.
Will this bring more Happiness to Bhutan.
Only the future will tell us, but in the meantime, two of the three large hydropower projects are facing serious glitches.
The Punatsangchhu-I, with a capacity of 1,200 MW, is the largest hydropower project under construction today in Bhutan. This joint project of the Royal Government of Bhutan (RGoB) and the Government of India (GoI) is a run-of-the-river scheme, located on the left bank of the Punatsang chhu (river) in Wangduephodrang Dzongkhag in Western Bhutan.
The Project will utilize a 357 meter gravity fall on a stretch of 11 km of the river course.
On July 18, 2007, an agreement was signed between the GoI and the RGoB for implementing the project.
On October 5, 2007, the Punatsangchhu-I Hydroelectric Project Authority (PHPA), an autonomous body was set-up for the construction of the PHPA I.
The sanctioned cost was then Rs. 35.15 billion for an installed capacity of 1095 MW (now it has been revised to 1200 MW).
It will be funded by the GoI according to the following pattern: 40% grant and 60% loan (with a 0% interest p.a. repayable in 12 equated annual installments starting after the completion of the project).
The Zero-Date (date of start) of the project was November 11, 2008.
Some characteristics:
WAPCOS Ltd. (a GoI Undertaking) are the engineering design consultants. Other organizations such the Central Electricity Authority, the Central Water Commission, the Central Water & Power Research Station, the Central Soil & Materials Research Station, the Geological Survey of India and the Survey of India could be consulted by WAPCOS.
The Main Civil Works (MCW) of the Project have been divided into three packages:
The works contract of the Generator Transformers, Reactors etc. is also BHEL’s responsibility.
Hyosung Corporation, South Korea takes care of the 420 kV Gas Insulated Switchgear, while Sudkabel of Germany will install the 400 kV XLPE cables
The Turbine Model was constructed and tested successfully and 80% of the detailed designs have been developed.
At this level, the work is progressing as per schedule.
The transmission system is the responsibility of BPC, a RGoB Undertaking with POWERGRID providing the consultancy.
The Project will get registered for availing Carbon Emission Reduction (CER) benefits. It will be communicated to National Environment Commission (NEC), Bhutan, Ministry of Environment and Forest, GoI and United Nations Framework Convention on Climate Change (UNFCCC).
The Project is scheduled to be completed in eight years (on November 10, 2016). According to the projections, the Punatsangchhu-I Hydroelectric Project will then (hopefully) generate 5.70 billion units in an average year.

Facing Problems
According to Kuensel, the Bhutanese publication, the PHPA needs another Rs. 3.5 billion ‘to stabilise the hill’ which is ‘sinking’ on the right bank of the project’s dam site.
The total cost of the project is now estimated at threefold the initial one (Rs. 97.5 billion). On September 20, the Authority submitted a status report to the Bhutanese government in which the cost escalation was mentioned.
Experts from the Central Water Commission (CWC) and the Geological Survey of India (GSI) recommended that the work should be completed by the end of the next monsoon. Practically, it means that the commissioning of the project will be delayed by a year, from November 2016 to November 2017.
The experts suggested ‘permanent strengthening measures’ which would include excavation of ‘overburden’ materials like boulders, sand, lose soil and access to the shear zone at an appropriate level and its replacement by reinforced concrete shafts or tunnels.
Kuensel added that “Piling of roller compacted concrete and providing cable anchors at different locations and additional concrete gravity dam block” have also been recommended.
One could ask, why the ‘experts’ could not think about this before?
Why all the necessary tests and investigations were not carried earlier?
It is an eternal question which could only be answered, “One thinks after”.
The experts from CWC and GSI are due to visit the site for the third time between October 18 and 22.
It was only after a first visit to the site (from July 28 to August 2), that seven holes were drilled on the slide area and the dam site.
Four holes, with a depth of 520 m, were drilled outside the landslide, upstream of the dam site; they indicated shear or unstable zone underneath, while the two holes, with depth 25 m each in the dam area, did not show any such a sign, even at the deepest level of the dam foundation at elevation 1075 m.
The report about the seventh hole drilled above the landslide, is not known.
Between September 1 and 15, the Central Water and Power Research Station from Pune conducted electric resistivity tomography and seismic refraction.
The outcome of the geo-physical studies, along five stretches of the hill from top to bottom of the slide would be available on September 30 and determine the type of underground earth structures required.
Once again, one thinks after.
The Authority has decided to use inclinometers to monitor the movement of the hill mass. They should be placed permanently along two sections of the hill, with a 30 m gap.
On September 9, a Technical Co-ordination Committee (TCC) discussed the outcome of the explorations and the need for further exploration or studies in the slide area and a proper action plan for restoring normalcy.
The TTC stated that all permanent measures needed to be completed before the onset of 2014 monsoon.
While visiting the site for the second time (from September 15 to 19), the CWC experts identified 11 locations for drilling, (of which 10 are within the slide). Drilling and excavation are underway and reports are expected by October 10.
According to the outcome of the investigations, changes will be proposed to ‘permanently strengthen the area’; the 'experts' are now confident to find “lasting solution for treatment of the hill mass and to ensure 100 % stability of the dam for its entire life.”
Only the future will tell if it is true; history tells us that nothing in ‘permanent’ in the Himalayas; we have seen it recently in Uttarakhand.

Mangdechhu Hydroelectric ProjectBut that is not all, the Mangdechhu Hydroelectric Project (MHP) also faces 'unexpected' difficulties.
An agreement for execution of MHP was signed between the governments of India and Bhutan April 30, 2010. The approved cost of the MHP was Rs. 3382.15 crores to be funded by GoI as 30% grant and 70% loan at 10% annual interest to be paid in thirty equated semiannual installments.
The tentative project cost has now reached Rs. 3,800.69 crores.
Folowing the pattern of  PHPA I, on June 8, 2010, the Mangdechhu Hydroelectric Project Authority was constituted.  The Authority comprises of Chairperson and four members nominated by the Royal Government of Bhutan and three members nominated by the Government of India.
The Project Management is headed by the Managing Director, who is being assisted by a Joint Managing Director, Director (Technical) and Director (Finance).
NHPC Limited, a Central Public Sector Undertaking is the Design and Engineering consultant to the project which is scheduled to be commissioned by September, 2017.

The Project Features
The 720 MW Mangdechhu Hydroelectric Project is located on river Mangdechhu in Trongsa Dzongkhag (District) in Central Bhutan.
The project envisages construction of: 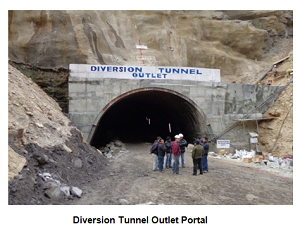 The power evacuation of the project has been planned through 400 kV Mangdechhu-Jigmeling via. Goling Transmission Line.
The annual energy generation from the project (with 95% machine availability) would be 2925.25 MU.

The MPH also facing problems
Like the the Punatsangchhu-I Hydroelectric Project, the Mangdechhu project is facing serious problems.
NHPC believes that the project should be shifted “to avoid shear zones or loose rocks encountered during the excavation”.
According to article in Kuensel, NHPC proposed that the locations should be moved some 40 meters away.
The new proposal would cost the project a delay of more than five months and additional cost of some Rs. 50 millions.
It has now been decided that the power project will continue with the excavation and construction of its powerhouse and transformer caverns in the initially identified location.
Kuensel quotes the project managing director AK Mishra who believes that the layout of the pressure shaft, tailrace tunnel, ventilation tunnel and a few other tunnels had to be moved from their present locations and the entire layout of the project would have to be re-inclined.
He told Kuensel: “A lot of changes would have to be incorporated and it would mean additional cost and delay in the completion of the project.”
The Bhutanese paper explains further: “The pressure shaft controls the volume of water that flows from the surge shaft to the power house and the tail race tunnel will take the water from the power house back to the river after electricity is generated inside the powerhouse. Ventilation tunnels are basically those that are built from the surface of the hill towards the powerhouse through which people can enter the powerhouse.”
The four turbines in the powerhouse are built underground.
The power generated is later sent from the powerhouse to the transformer cavern, which will in turn boost the energy before transmission to the substation.
This work could be carried out simultaneously, not provoking any delay for the main project. As today some 15 % of the area of the powerhouse and the transformer cavern has been excavated.
Kuensel’s investigations have found that re-location of the powerhouse and the transformer cavern would not solve the problem, just because the shear zone had stretched over a vast area.
AK Mishra suggests: “We’d rather treat the shear zone, remove loose rocks, pump cement slurries into the vacuum and stitch the area.”
But at what cost?
It is pointed out that the cost of the project has already been revised cost is Rs 3,800 crores from an estimate of Rs 2,900 crores in 2008. This was due mainly to inflation.
Using these figures, the overall cost of the project could reach around Rs 4,700 crores at the time of completion, if “the project does not encounter major geological glitches, or increase in the scope of work.”

'If'?
In another posting, I mentioned the 2009 Uttarakhand State Audit of the Controller General of Accounts: "The State’s policy on hydropower projects was silent on the vital issue of maintaining downstream flow in the diversion reach (the stretch of the river from the point of diversion into tunnel to the point where it is released back into its natural stream). The physical verification of four out of five operational projects, showed that river-beds down stream had almost completely dried up, the water flow was down to a trickle, and extremely inadequate for the sustenance of ecology and nearby groundwater aquifers. [Paragraph 5.3.1]"
Many more environmental issues will be encountered.
Has they been taken into considerations or will it be looked into 'after'?
It seems to me that Bhutan is trading Happiness for an uncertain 'developed' future.
Posted by Claude Arpi at 2:02 PM