The Chinese tourists are arriving in Bhutan

During the last few weeks, I wrote about the Chinese tourists in Tibet and in Nepal, but the Kingdom of the Dragon has also started receiving large groups of tourists from the Middle Kingdom.
It is now the third most important contingent after the Japanese (6,967 visitors last year, an increase of 77 % from the previous year) and the US 6,007.
In 2012, the Tourism Council of Bhutan (TCB) recorded the highest ever number Chinese tourists (3,766), an increase of about 30 % from the previous year.
In 2012, tourist arrivals in Bhutan stood at 105,407 or 54,685 were dollar-paying tourists, and 50,722 regional visitors from the neighbouring countries such as India and Bangladesh.
Kuensel, the Bhutanese publication reported that according to local tour operators, the wedding Tony Leung, a Hong Kong actor with Carina Lau was a great boost. On 21 July 2008, the couple got married in Bhutan in royal fashion; the wedding created a media frenzy in Hong Kong, with hundreds of thousands of dollars being spent to cover the party.
This greatly helped promote Bhutan as a tourist destination in the Mainland.
A tour operator told Kuensel: “Bhutanese culture isn’t the main attraction for Chinese tourists. It’s to do with the happiness factor. Most Chinese tourists say they come to experience happiness in Bhutan.”
In 2010, about 21 Bhutanese travel companies visited China for marketing and promotion.
Chinese tourists like to visit Bhutan in October, but Drukair, the official Bhutanese airline says that Chinese tourists also fly from Kathmandu in February, during their Lunar New Year, which coincides more or less with the Bhutanese Losar; this year there were apparently demand for chartered flights.
A Chinese website dedicated to tourism, reports: “With the rise of personal incomes and living standards, the outbound tourism of China grows by leaps and bounds. Chinese people are eager to go sightseeing overseas which creates an immense market for some nearby countries. The popular outbound destinations include USA, Russia, France, Australia, Japan, South Korea, Malaysia, Singapore, Thailand and Maldives, etc. In 2012, the number of outbound tourists totals 83,182,700, up 18.41 % comparing with 2011. At present, China has increased the number of permitted overseas destinations for her citizens to 114 countries and regions. A further and sustained growth of outbound tourism is expected.”
It further explains: “Among the outbound tourists, 58.9 % went abroad for the first time, down 4.66 % over the same period of 2011, while the percent of multiple-exit travelers increased. …The rate of travelers spending over 5,000 US $ came down obviously, saying the outbound tourism became more popular among common people. Travel purposes include sightseeing, business trips, and holiday tours, etc. The travel methods were not only joining large tour groups any more, but also organizing small family groups and private tours.”
In the year of 2013, China’s outbound tourism will still grow exponentially, the travel agents expect that it will reach 94,300,000, close to 100 million, can you believe it, up 15 % over 2012; the outbound consumption will reach 117.6 billion US $.
According to Li Shihong, a senior official of China's National Tourism Administration (CNTA), Chinese tourists have emerged as the third-biggest spenders in outbound tourism worldwide. 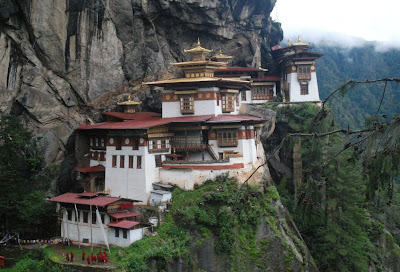 The number of Chinese tourists in Bhutan remains modest compared to these figures, but it has shown a remarkable increase.
According to the Bhutan Tourism Monitor (BTM), in 2012m Chinese tourists visited Bhutan for a short period.
Chinese tourists are usually highly educated, most of them holding university degrees. Some 64% of the total visitors in Bhutan came for the first time, while about 27 % of them came for the third time.
About 34 % of Chinese tourists came to visit only Bhutan, while others combined their trips with neighbouring countries.
BTM says that most of the Chinese tourists came to Bhutan in groups: “About 49 percent of the visitors came in as ‘group of friends’, followed by about 21 percent as couples, and about 20 percent as part of organised tour groups,”.
While the American tourists stayed an average of eight days, the Chinese and Japanese tourists spent 4.96 and 4.88 days respectively. “Asian tourists staying for shorter duration is a stable trend and does not seem to change with the years,”
The security factor is never mentioned.
It is not the case in India.
The New Indian Express recently wrote about the ‘fears of Chinese indoctrination and recruitment’ which make the top levels of the Indian intelligence establishment panicky.
The newspaper’s source pointed out “more than 200 strategic institutions in Arunachal Pradesh and Sikkim, including monasteries, are witnessing a flood of visitors from China and Tibet, an autonomous hill province virtually ruled by China. It is suspected that many young students from the Tibetan Autonomous Region are planted in monasteries to gather information about the activities of the Tibetan diaspora fighting for an independent nation.”
It is not necessary to comment on the ‘virtually’ ruled but China, but the Tibetan Administration of the Dalai Lama and the Indian intelligence are facing a serious challenge.
In 2012, Liangki Jiancen, a Chinese spy posing as a trader, was caught by Indian agencies from Sikkim. Liangki had collected information on the strategic infrastructures and key installations in the area.
Apparently some 650 Chinese nationals, who entered India on valid tourist visas, are still roaming free in the country without valid papers.
The New Indian Express quotes the some intelligence agency’s source, saying that “it is impossible to examine the antecedents of each and every tourist or pilgrim unless they have assets on the ground, which understand the language and dialects of the visitors. Hence a Mandarin language expert unit will filter information collected from various dialects through technical intercepts in the border areas.”
Well, it may take some time to have officials speaking Mandarin.
In the meantime, the security angle does not seem to bother much the Bhutanese? Though it is true that tourism is better monitored in the Dragon Kingdom than in India, it could nevertheless become a serious issue in the years to come.

In the meantime, the disneyfication of Lhasa continues.
Have a look at the Potala Palace 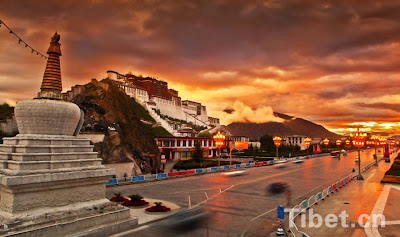 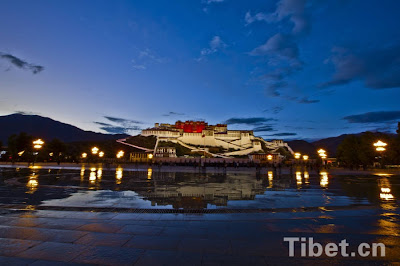 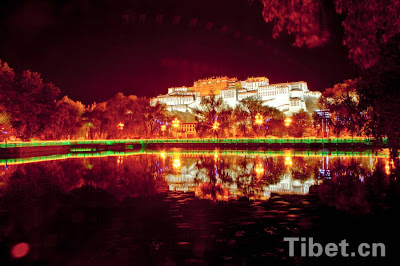 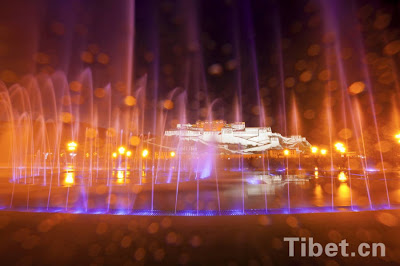 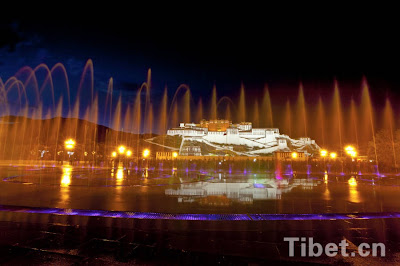 And The Inflatable Snow Lion 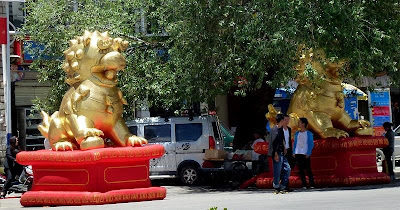